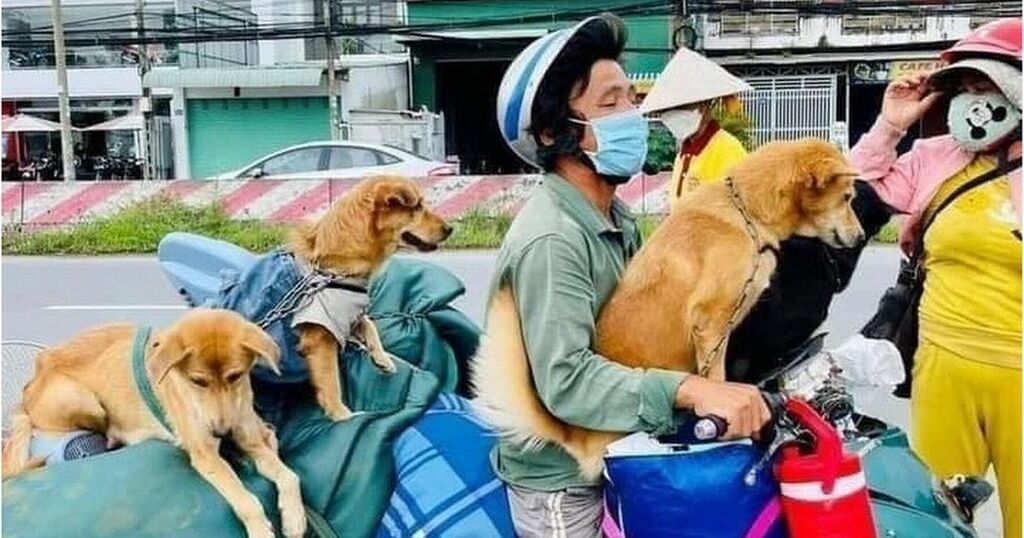 A married couple battling Covid found out from their hospital beds that their 12 dogs had been killed over fears the pets could spread the virus.

Authorities in Vietnam decided to put down the animals without alerting their owners in a case which has been dubbed "barbaric" by furious critics.

Others have called the cull "cruel" and "heart-breaking".

Pham Minh Hung, 49, said both he and his 35-year-old wife Nguyen Thi Chi Em are so upset after learning their beloved pets are dead that they have been unable to sleep.

The devastated bricklayer said: "My wife and I cried so much that we couldn't sleep.

"I didn't want to believe that really happened… I couldn't do anything to protect my kids (the dogs)."

He added to the BBC : "I raised my kids for about six years, I definitely want justice for my kids."

Their case has sparked fury in Vietnam after it was publicised on social media app TikTok resulting in a petition calling for an end to the practice.

The couple's nightmare began as the latest wave of Covid has been the worst to hit Vietnam since the start of the pandemic.

A strict lockdown in recent months has meant at least a million desperate migrant workers have fled to the big cities in seek of work.

Including the animal lovers who embarked on an 280km (173 mile) journey along with their dogs and three relatives, who also brought three dogs and one cat, on October 8.

The couple headed for Khanh Hung in Ca Mau province, the hometown of a relative, as Covid cases are not as high there.

Witnesses have posted videos about the couple's journey online winning them scores of fans on social media.

Footage shows them on their motorbike with their dogs and belongings all piled as witnesses cheered them on and wished them luck.

The couple started their voyage with 15 dogs, but as their trip went on, they gave two dogs to a volunteer after entering Ca Mau province.

However when the couple and their relatives arrived at Khanh Hung they had to undergo mandatory Covid tests which is when they both tested positive.

Their beloved pooches were left at a quarantine as they were transferred to hospital.

State media said local authorities killed their 12 dogs and their relatives' pets without informing them but the article was later removed.

It is not known how they were killed but an official police newspaper carried an image suggesting they were burned.

On Sunday, Tran Tan Cong, a local official, said during a press conference: "Disease control must be prioritised in the first place and the decision to kill the animals immediately was a necessary preventive measure."

Nguyen Hong Vu, a staff scientist of the City of Hope National Medical Centre in the US, said the killings were "unethical" and "ridiculous" because there are no rules that state pets must be killed if owners are infected.

He added: "There is no scientific evidence dogs and cats can be an intermediary for the transmission of Covid to humans. However, people with Covid can sometimes infect them."

Vietnam initially won praise from the World Health Organization (WHO) for its quick response to the virus and widespread contact-tracing.

But the Delta variant has now crippled the nation with a reported 840,000 cases and more than 20,000 deaths in total.