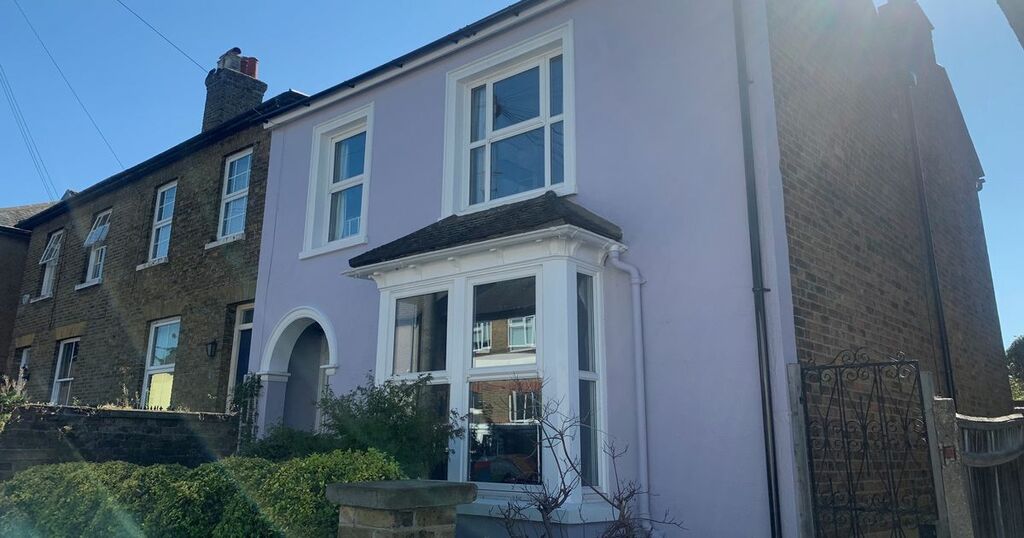 A couple may be forced to repaint their lilac home after the local council branded its colour 'harmful' and 'unacceptable'.

Kate Codrington, 55, and her partner Ian Davis, 62, hired a decorator to transform their yellow Hertfordshire home in August 2020.

But, after the revamp of the Victorian property was completed, the couple were contacted by Watford Borough Council who had received an objection to the handy-work by a mystery complainant.

The couple received another blow from the council last summer when it failed to back their retrospective planning application to turn the once-yellow property lilac.

A council officer ruled that colour was "harmful" to the surrounding conservation area and "unacceptable in its design".

This left the pair facing the possibility of having to return their house to its original colour, but last month launched their a fresh bid to keep the current lilac paintwork.

Before the couple went ahead with repainting their home, they said they did not know they needed planning permission.

In September, when the couple discovered their planning application was rejected, Kate said: "It [the paintwork] is life-enhancing and lifts hearts on a grey day. The world needs more joy and colour.

"The house had been shabby for two years and it showed dirt. We didn't know permission was needed and I wasn't aware about the conservation zone."

When the council found out about their paint job, Mr Davis and Ms Codrington were told to submit a retrospective planning application and were "severely shocked" when it was refused in September 2021.

Following the refusal, the couple launched a petition to "abolish" the controversial conservation area and also recruited a heritage and townscape consultant to help shape an appeal which was submitted to the Planning Inspectorate last month.

In her report submitted on December 5, consultant Nairita Chakraborty, who visited the property in October, explained why the council's decision should be overturned.

She acknowledged the council's motives to protect Oxhey Village's "special interest", but indicated the features of other properties within the village have lost their "consistency" and "uniformity".

She said the new lilac colour is not "garish" nor "unsympathetic" to the surrounding Victorian properties - nor is it "out of keeping" with the character of the local area.

Ms Chakraborty wrote as part of the the appeal submission: "The core of the Oxhey Conservation Area is one of Watford's oldest residential areas.

"The area is distinct from other later Victorian areas of the town for its varied architectural character with terraced housing interspersed with detached and semi-detached villas, as well as being pepper potted with a variety of public houses and shops.

"The colour of exterior paintwork is an important contributor to the character and appearance of this conservation area and should be preserved when changes are made to the buildings.

"The external colour, albeit different, is not discordant with Victorian properties or indeed within the wider streetscape which is extremely varied.

"The council's conclusion that the colour is 'unsympathetic' is wholly flawed, since there isn't any consistency is the external appearance of the conservation area.

"Additionally, in refusing the application, the council failed to give weight to the enhancement that would be achieved by the proposals."

The appeal is pending approval with the Planning Inspectorate. An inspector will decide whether to uphold or dismiss the appeal.