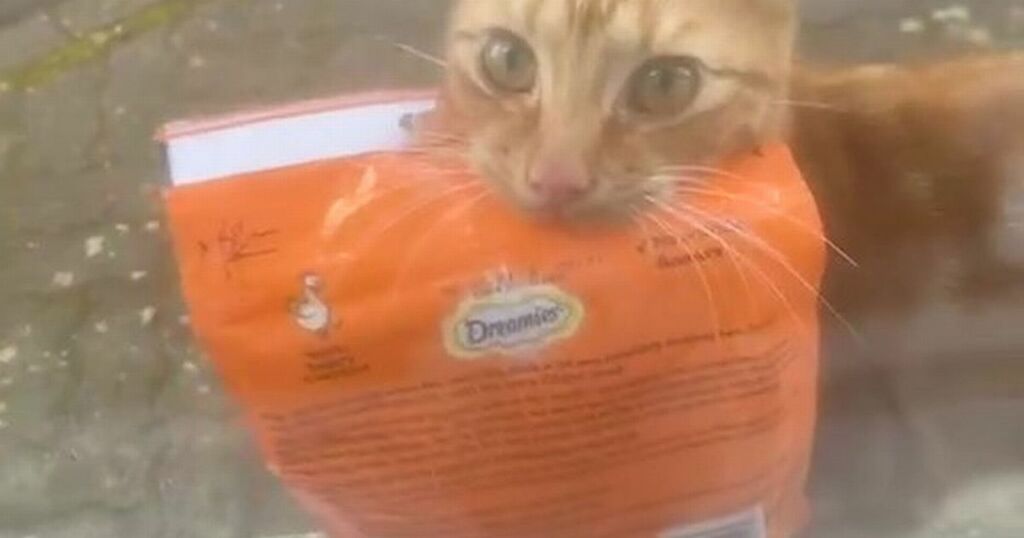 Lauren Street, 26, and her boyfriend Patrick Garrity, 30, were baffled when they kept finding discarded containers of cat, and even dog food, outside their home in the Cotswolds.

Hilarious footage shows the moment Patrick solved the conundrum, catching their ginger pussycat Tivali tiptoeing across their window ledge with a massive bag of Dreamies hanging from his mouth, despite his meagre size.

Leaving builder Patrick in stitches, brazen Tivali, one, immediately jumped inside the house once the window was opened wide for him.

The cheeky cat's unusual thieving habit has made him a local celebrity and the couple admit the strangest thing he has stolen and brought home was a dauphinoise potato.

Lauren, from the Cotswolds, said: "We had started noticing treats outside. There would be empty treat bags by the door - Dreamies, Aldi treat packets even dog treats. You name it we’d had it.

"In total Tiv must have stolen at least 10 bags, if not more. We were really unsure where he was getting them from so it was a mystery.

"We were so shocked when Patrick saw Tiv running at the window with the full bag.

"We weren't exactly sure how he was bringing them back but from the video you can see he carries the full bag. He's a strong ginger.

"We were in stitches, we watched the video over and over again."

Having captured Tivali in the act, Lauren set about finding the source of the stolen good and found out her cat had become a bit of a local celebrity.

Lauren, who works in building control, said: "We spoke to a neighbour who confirmed that she was leaving treats out for the little girl next door to feed her cat and Tivali was stealing the full bags.

"He was bringing them home to share with us.

"Both he and his dad Lynx are pretty famous in the village, lots of people stop and talk to them as they are so talkative."

The couple's video has been viewed more than 3.2million times online.