Country diary: Watching a merlin for as long as I can 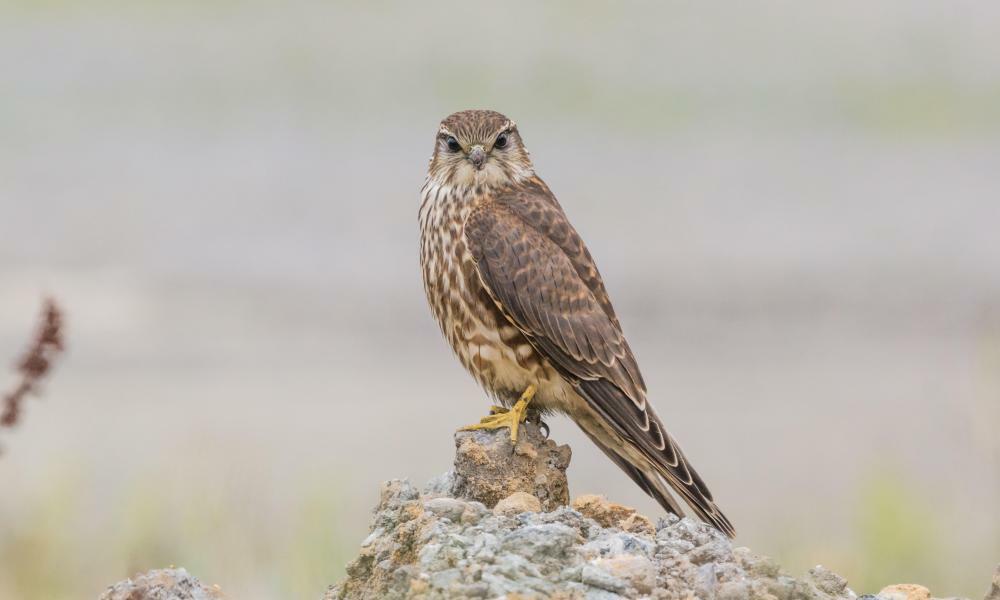 As the grey sky darkens, waves of black, silhouetted fieldfares and starlings move through the air, some dropping to settle on the grass on the brooks. A lapwing loops in a figure of eight and lands among others huddling together beside one of the pools. The calls of Canada geese and whistles of teals and wigeons carry over the quietening marsh. I scan the fields with my telescope, watching the birds begin to settle down for the night.

I pick up an upright shape sitting on a pile of mud. Refocusing, I see that it’s a female merlin. The small, brown bird of prey sits with its back to me, the cold wind picking at its feathers. It turns its head from side to side, watching the flocks of birds coming in to roost. It bends down and pulls at something at its feet. I’d seen a female merlin earlier in the afternoon – a dark arrowhead shape chasing the starlings across the brooks – and this is probably the same bird, feeding on a kill. It finishes its meal, stretches out its wings, shakes its head and begins to clean its talons with its beak.

Our smallest birds of prey, merlins breed on northern uplands, but some come south for the winter. They can be hard to see on Sussex grasslands, the Downs or coastal marshes – and then only fleetingly as they briefly alight on a post, or dart low in pursuit of small birds – so I’m determined to watch this one as long as I can. The merlin preens, carefully running its beak through its wing feathers, pushing them back into place. It turns its head almost all the way round and stares directly at me. I remain completely still. It watches me for a while and then turns back.

As the day becomes darker, the definition of the bird fades, its brown plumage merging with the muddy background. I’m about to move on when the merlin leans forward and stretches its wings again. It flaps once, twice. This time it pushes off, and I watch it fly away, across the marsh and towards the trees, where I lose sight of it in the gloom.