Country diary: the butterflies are fading, but one still shines 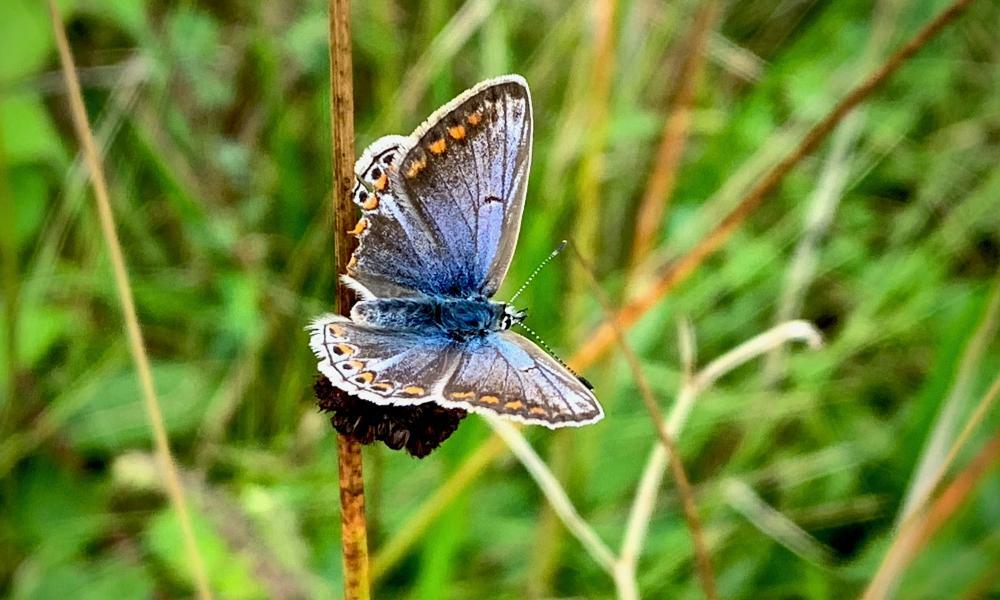 A tiny blue flash, brighter than the sky above, catches the eye and tells an inspiring story. The surrounding trees are dense and dark with that coarse green of the dog days, but there is a verge of grasses, wildflowers and heather, relict of an old heath before the plantations, running either side of the abandoned road.

The blue flash is a butterfly – a silver-studded blue Plebejus argus – and it makes the heart skip a beat. There are very few of them about and they look knackered. Their wings have chunks bitten out and they have lost so many of those scales that refract blue light that they are almost transparent. The butterflies are losing focus, fading away. This is partly because the adult insects are at the end of their lifecycle, and partly because so little of their habitat remains. Insects everywhere are threatened by so many of our activities that it is necessary to sharpen our focus on them to understand the wonderful connections they make in the world we share.

This butterfly connects completely unrelated species – including ourselves – and the road. Built during the second world war, the road is made of concrete, and spilling from its cracks is sand excavated by ants below. These black ants, Lasius niger, have an old affair with silver-studded blue butterflies. The butterfly larvae and their pupa have myrmecophilous organs that produce a honey-dew of carbohydrates that is powerfully nutritious to ants. The female butterfly, looking for plants to lay eggs on, detects chemical and acoustic cues for the presence of worker ants and attracts them to the eggs. Like us, the cohesion of ant colonies is dependent on multimodal communication, and the colony “knows” about the butterflies.

The ants attend the silver-studded blue butterfly caterpillars and pupae, taking them into their nests, protecting them from predators, taking them out to graze and milking them for the honey-dew, which has a significant impact on the sex and wellbeing of ant larvae. When the adult butterflies hatch, the ants coax them into the sky. In that blue flash lies a story of symbiosis – a wonder and an inspiration.

• The caption on the photograph in this article was amended on 10 September 2021 to correctly identify the butterfly as a female common blue and not a silver-studded blue, as an earlier version stated.