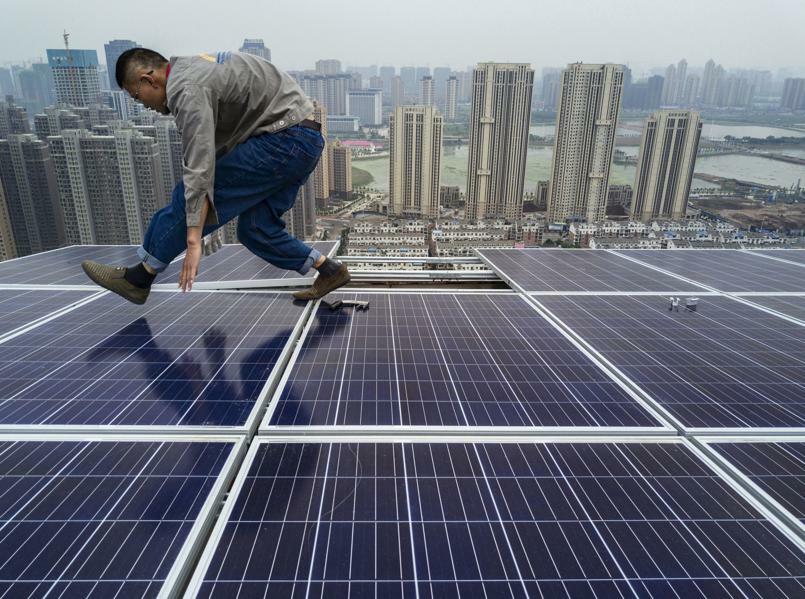 With countries racing to end their reliance on the fossil fuels that cause climate change, it’s a boom time for renewable energy. Now, an international team of researchers has determined that if every available rooftop was equipped with solar panels, they could generate enough electricity to power the world.

At least, in theory.

In their assessment published in Nature Communications, a team led by energy researchers at University College Cork in Ireland calculated a figure for the total surface area of all the rooftops in the world: some 0.2 million square kilometres—an area almost the size of the U.K. The authors then worked out that, if all the surface area was covered with solar photovoltaic panels, they could generate a total of 27 petawatt hours of electricity per year—more than the combined electricity consumption of the world in 2018.

That’s a lot of power. But the authors, led by Siddarth Joshi, a PhD student at University College Cork in Ireland, aren’t necessarily recommending that every rooftop on Earth must be festooned with panels. For one thing, the physical and logistical obstacles to such an operation would likely be insurmountable, and for another, the authors show that, from region to region, the costs of solar vary hugely. Just as crucially, electricity consumption could almost double in decades to come, according to McKinsey, dwarfing the total power consumption seen today.

But what the report does do is show how rooftop solar can best be deployed to help nations rapidly—and relatively cheaply—decarbonize and decentralize their power grids, as Siddarth Joshi himself explained.

“Rooftop solar has two unique attributes that set it apart from other forms of renewable energy generation: fast deployment, and decentralised citizen-driven uptake. These attributes lend it specific advantages over other renewable generation technologies,” Joshi told me. Rooftop solar therefore “brings significant advantages in terms of broad participation of society in the energy transition to a low carbon future, due to the use of residential and public buildings as the locations where the technology will be deployed.”

He went on: “The assessment can aid intergovernmental agencies, governments, development banks and energy agencies in a) understanding where the rooftop hotspots are and b) how to prioritise investment in these hotspots within the distributed potential of each country.”

Joshi and his colleagues show that the cost of rooftop solar varies from $40 to $280 per megawatt hour (MWh), depending on the region. (These can be compared to sample global levelized electricity prices calculated by Lazard, which suggest a cost of $36 per MWh for utility-level solar, $40 for onshore wind, $112 for coal, and $164 for nuclear power in 2020.)

Vitally, the authors reveal that the lowest costs for rooftop solar can be attained in densely populated regions in China and India—the world’s two most populous nations, which face huge challenges in simultaneously cutting carbon emissions while providing increasingly more energy for their people. At a price of $66 per MWh in India and $68 per MWh in China, rooftop solar in these countries is cost competitive.

“Our assessment shows that India and China have a sizable potential for RTSPV [rooftop solar photovoltaics], along with lowest cost to deployment of these technologies. Adding in the component of manufacturing and low cost labour, India and China can truly reap the benefits of RTSPV in first displacing their current fossil fuelled generation mix and second by introducing additional generation capacity that is less carbon intensive,” Joshi said.

In addition, rooftop solar has the advantage of both reducing local air pollution—where it replaces conventional fossil fuel-based energy generation—and reducing transmission network loads by decentralizing electricity supply. And, unlike almost any other form of energy generation, it can do all that without impacting the land and ecosystems, as it is installed exclusively on existing buildings.

Nevertheless, to achieve the full potential of rooftop solar, certain necessary conditions would have to be met. Crucially, given that solar power by definition can only generate power during the day, the deployment of storage in the form of batteries and smart grids that can coordinate supply and demand will be critical.

The findings emerge in the context of what can only be described as the dawn of a golden age for renewable energy. According to the International Renewable Energy Agency (IRENA), between 2010 and 2020 the costs of generating electricity from utility-level solar fell a precipitous 85%. As reported in this column, some researchers believe the falling costs of renewables could push fossil fuels out of electricity generation altogether by 2035.

That’s just as well. Under the net‐zero emissions scenario developed by the International Energy Agency (IEA), which the agency says is the pathway the world needs to take to limit global temperature rise to 1.5 degrees Celsius, wind and solar power will need to provide at least 70% of total electricity generation by mid-century. Right now, the IEA says, 25 million rooftops around the world already have solar PV installed. To get to net zero emissions, “the number increases to 100 million rooftops by 2030 and 240 million by 2050.”

This ought to be feasible. So far, 80 nations have ratified the International Solar Alliance (ISA) framework agreement, which aims to coordinate efforts between “solar-resource-rich countries” to increase the deployment of solar energy technologies “in a safe, convenient, affordable, equitable and sustainable manner.” ISA says its member nations are aiming to mobilize $1 trillion in investments by 2030 in order to achieve this.

But it remains to be seen whether rich nations will hold up their end of the bargain: next month, all eyes will be on Glasgow for the COP26 climate summit, to see whether the richest countries will finally make good on their promise to deliver $100 billion every year in climate finance to support developing countries.

The rooftop solar assessment report can be read here.