Like a growing number of voters they 'just wanted to get it out of the way'.

While the Shortland electors weren't sure if their votes would make a difference, they were certain about the issues that mattered to them.

"Living expenses. We are both pensioners and it is just getting harder to get by," Lynda Williams, who didn't indicate who she voted for, said.

She added the inability of young people to afford a home was particularly unjust.

"My daughter is paying almost $500 a week to live in a house that is falling apart. It's not right," she said.

Voices of the Hunter - Federal Election Special: A journey through the seat of Shortland

Her mother added she felt the government had let older Australians down.

"It's just a struggle to get by. The government could have done so much more but they haven't," Judy Williams said.

With less than 48 hours to go, more than 25 per cent of electors in Shortland have voted.

Both major party candidates claimed they had an edge.

"The vibe is great. It feels a bit bluer, as I call it, than 2019," Liberal candidate Nell McGill, who spent Thursday morning at the Charlestown pre-poll booth, said.

"There's a few more people only taking the blue (Liberal) one. But lots of people are also coming prepared, which we didn't see in 2019."

Meanwhile, Labor's Pat Conroy, who holds the seat with a 4.5 per cent margin, also said he was feeling more positive than in 2019.

"I'm detecting a mood for change nationwide and I think that is translating here to some positive support for Labor and certainly none of the hostility we experienced in 2019," Mr Conroy said while engaging with voters at the Belmont pre-poll booth.

"In 2019 I had people having a go every day about so-called death taxes and retirement taxes. For some reason people didn't like Bill Shorten and we had coal miners who felt we had turned our backs on them. We are getting none of that this time.

"I'm optimistic but anyone who lived through 2019 won't be predicting outcomes."

Like elsewhere, the impact of independents remains an X factor.

Anna Marriott, who handed out how-to-vote cards for four 'freedom' independents at Belmont said she had been overwhelmed by interest in the candidates.

Ms McGill warned the independents should not be underestimated.

"They are in multiples here and at the other polling booths which is really different. Last time it was just One Nation in the Senate and the conservatives whereas here we have a whole range of different parties," she said.

"There's a lot of people who are annoyed at the two parties and want to have a protest vote so it will be interesting to see how that plays out."

But Mr Conroy predicted their influence would be limited to the capital cities.

"I think they will have a strong showing in Sydney and Melbourne but I'm not sure if they will win any extra seats. They are certainly diverting some resources.

"There's a couple of prominent ones running in the Hunter that might split the conservative vote. I think in these seats it will be a choice between Labor and the Liberal and National Party." 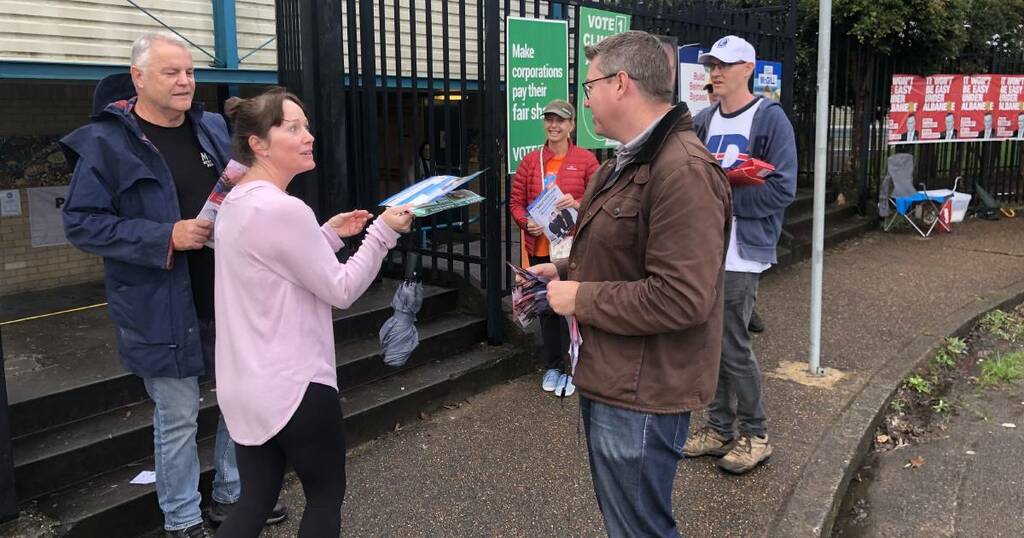 "People seemed like they were coming back to us": Labor confident in Shortland
Upbeat Labor supporters are gathering at Windale Bowling Club in the hope of winning government tonight and tightening their grip…

Australian Prime Minister Scott Morrison criss-crossed the country in a final day of campaigning, insisting he could still win Saturday's…