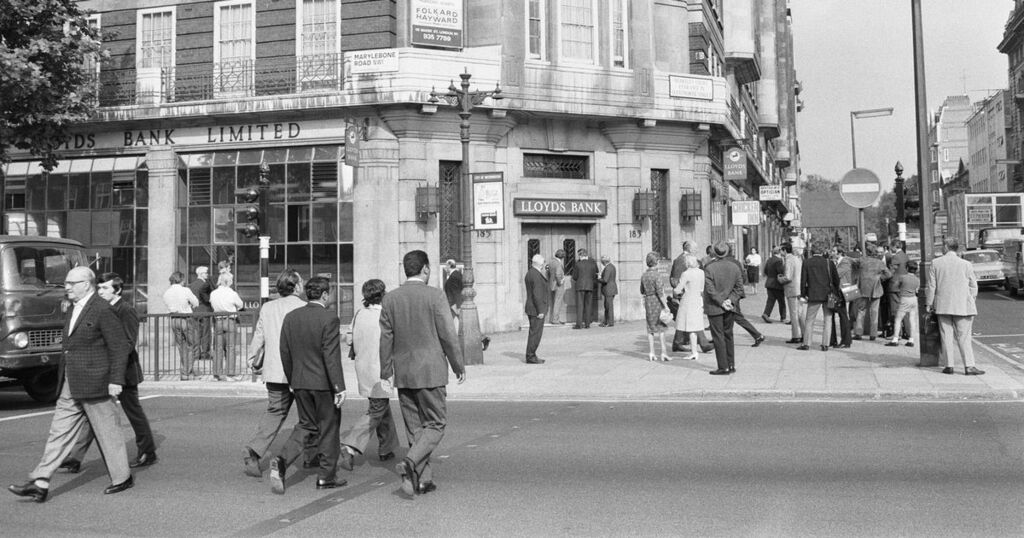 The bent officers are said to have extorted more than a third of the loot taken by the villains who tunnelled into the Lloyds Bank on Baker Street on September 11, 1971.

New details of the crime, pulled off by Hatton Garden heist mastermind Brian Reader and five associates, have been revealed following the fiftieth anniversary, which was on Saturday.

The burglars were dubbed the “Millionaire Moles” after netting £3million worth of loot - more than the amount taken in the Great Train Robbery – today worth £43million.

It dwarfs the £14million said to have been taken by Reader and a new team of thieves when they drilled into the Hatton Garden Safety Deposit vault over the 2015 Easter bank holiday.

An insider has now revealed how two of the 1971 raiders gave their entire share back to the police while Reader and another associate handed back large portions in an effort to escape jail.

But only £231,000 was ever officially recorded as having been recovered, leaving around one million (£14 million today) in the hands of bent cops.

The source said: “One of the officers was a big gambler and he kept coming back demanding more. “Four of the six on the job gave back their tom [jewellery].”

Scotland Yard Detective Inspector Alec Eist was said to have been one officer who took proceeds from the burglary in exchange for protecting the gang.

He was awarded 13 commendations during his career, including one for his work on the Baker Street raid.

But anti-corruption probe Operation Countryman later unearthed claims that he had taken bribes from a number of major crimes, including Baker Street.

He was said to have auctioned the proceeds of another burglary, at the Bank of America, in the basement of Paddington Green police station.

Eist was later named by one of Reader’s associates as being bent.

By 1976, while facing a string of corruption allegations, the Det Chief Insp was returned to uniform and ordered to monitor parking wardens.

He was acquitted in an unrelated corruption trial after his 1977 retirement and died some years later.

The source said: “Eist was a complete scoundrel but in those days you wouldn’t last in the CID if you wasn’t crooked, they had no straight runners around there.”

Humphreys’ revelations about police corruption ended with the jailing of a dozen detectives who had taken protection money from him.

He told Labour MP Robin Corbett that two officers had helped themselves to £1million worth of gems from the Baker Street raid and sold them on the black market.

Three ringleaders of the Baker Street gang had spent months planning the heist, renting a leather goods shop two doors up from the bank, and then tunnelling 40ft from the store basement into the vaults.

The backbreaking work involved shovelling tonnes of earth and resulted in one of the men losing a stone and a half in weight.

Once inside, they ransacked 268 safety deposit boxes - nearly four times the 73 opened by the Hatton Garden gang during their raid.

But there were many similarities between the crimes. Both were carried out over bank holiday weekends; both involved tunneling into a safety deposit vault using heavy equipment; both had an “outside man” stationed opposite with a walkie-talkie and both saw the raiders coolly leaving to get more equipment before returning to finish the job.

Four men were convicted of the first burglary, but they included only one of the ringleaders, photographer Tony Gavin, then 39, who was jailed for 12 years.

Reader, then a 31-year-old married man with two young children, escaped justice after passing back some of his “whack” to bent cops via a middle man, the insider said.

His friend Bobby Mills, who had been the lookout, also returned some of his “parcel” in exchange for being left alone.

A fifth suspected ringleader, known as “Little Legs”, was never held along with a man known only as “Ginger John”.

Planning had begun the year before when Gavin realised the bank on the southern edge of Regent’s Park held a huge amount of cash and valuables.

Gavin brought in his friend Reg Tucker, a car dealer from Stoke Newington, North East London, to recce the vault.

Tucker, then 37, who was not known to the police, opened an account at the Baker Street branch on December 7, 1970, with a deposit of £500 using the fake name G Edwards.

Gavin, a former army PT instructor, led the digging using the floor of the neighbouring Chicken Inn restaurant as the roof of the tunnel.

They could only work when the restaurant was shut, between around midnight and 9am each night.

By the Monday of the first weekend they had excavated a space seven-feet wide and four- or five-feet high at a spot they estimated to be directly under the vault.

But a jack placed onto some railway sleepers used to push against the 18 inch reinforced concrete only sank into the floor.

So the gang walked out and went home in preparation for returning the next weekend with gelignite which they used to blow a hole in the floor.

It was at this point that a radio ham had picked up the gang’s walkie-talkie transmissions but the police failed to catch them red-handed.

In 2016 the Mirror traced Gavin, now 87, to an address in the south of England where he declined to speak.

Reader, now 82, is living back at home in Dartford, Kent, after serving half of his six year three month sentence for the Hatton Garden burglary.

Reader’s lawyer has previously said that his client vehemently denied being on the Baker Street raid.

Mills is believed to have died in Spain some years ago.

It is not known if Tucker, who was jailed for 12 years, is still alive.

The story of the Baker Street raid was made into the 2008 film The Bank Job, starring Jason Statham and Daniel Mays.