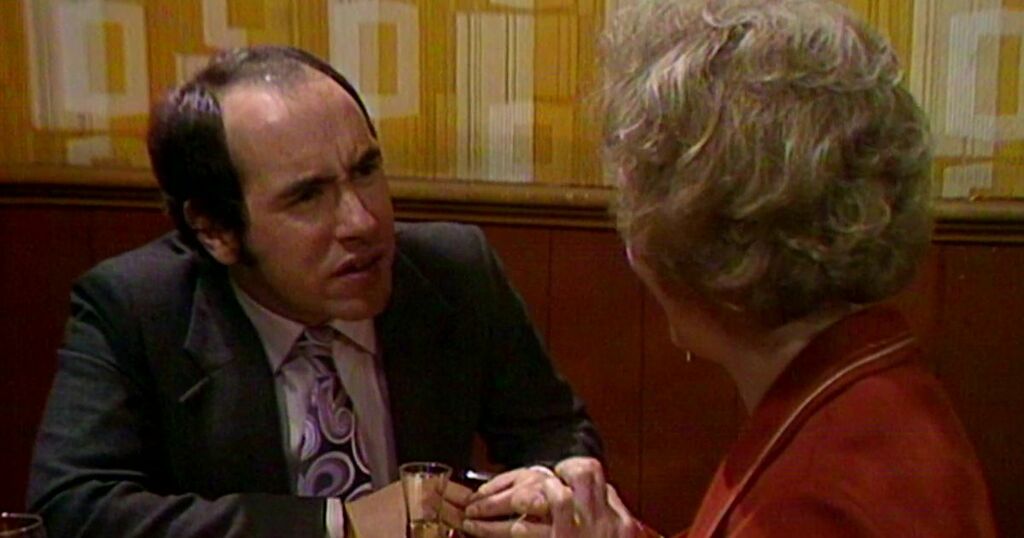 Malcolm Hebden became a Coronation Street legend playing Norris Cole - but it wasn't his first role on the cobbles.

The 81-year-old actor rose to fame playing the nosiest neighbour in all the land and became on of the most recognisable faces on the ITV soap.

However, 20 years before Norris was gossiping on street corners and catching kids pinching sweets in The Kabin, Malcolm was cast as a completely different character.

He first rocked up in 1974 as a Spanish lothario named Carlos, who was Mavis Riley's lover, but at that stage still had lots of jet black hair.

"I remember coming for the interview and I thought Coronation Street I can use my own Burnley accent now. And then he was from Spain," said the actor in December 2019.

"In the local paper once the headline was 'Olé: Old Spanish eyes comes from Burnley', which rather blew my cover."

In tonight's special Coronation Street Icons episode, which is celebrating Norris' most memorable moments and classic storylines, Malcolm reveals how he learnt the Spanish accent.

The actor would take the scripts to a Spanish friend at Burnley college and getting him to read them before copying him.

Carlos only made a fleeting appearance on the Street and it would take nearly two decades before we saw Malcolm return as the character we are all now so familiar with.

While Norris is a busybody shopkeeper who loves a bit of drama, Malcolm is actually completely different in real life.

On how he copes with fame, Hebden told the Blackpool Citizen in 2009: "I am a private person. I live alone and I quite like it like that. I don't hide away though, and I've been filmed shopping in Sainsbury's on someone's mobile phone once - it was on YouTube.

"You do have to be careful though. I don't go out clubbing at night. For one thing I'm too old, but I don't anyway because when people have had a few drinks their attitude can be slightly different."

The actor has always been surprised with how popular his character is, particularly with children, adding: "I would have thought he'd get on our nerves, but he doesn't."

During a massive cast cull in 1997, Norris was one of the characters who was removed from the Street.

But Malcom was brought back just two years later and was given a more regular role than he had before.

He remained on Corrie until December 2017, when the actor sadly suffered a heart attack that nearly killed him - and he revealed he actually died while in the A&E department.

Malcolm was in the Lancashire Cardiac Centre and Blackburn Royal Hospital for three months, including three weeks in an induced coma.

In July 2018, he praised the NHS for saving him, adding: "People are asking if I’m returning to the Street. I may do, I may not, it depends on my recovery."

A source added: "Malcolm’s health is the most important thing and show bosses are really looking after him."

One of the people who looked after Malcolm when he was ill was Patti Clare, who plays Norris' close friend Mary Taylor in the soap.

To the delight of all Corrie fans, Malcolm did make a comeback as Norris in June 2019 when he sold the shop to Brian and Cathy behind Rita's back.

Then he made another hilarious return last year when Norris caused chaos at the retirement village with Ken Barlow.

In January this year, it was announced that Malcolm had decided to secretly quit the soap after 27 years - meaning his final ever episode was broadcast in June 2020.

The actor told The Sun : “I absolutely adored playing Norris and I was pleased to be able to return briefly after my operation.

“It took a great deal of courage to make the decision to retire.

“But I had come to realise that although the mind was willing the body was not so much.”

To commemorate Malcolm's achievements, ITV are airing a special tribute to his beloved character tonight in between the double bill.

Sally Lindsay narrates as co-stars past and present have their say on the great man, as well as an honest and emotional interview with Malcolm himself.

The programme pays homage to a notorious Norris scene during a drag singing competition in the Rovers where he was dressed as singer Eartha Kitt while belting out out ‘Old Fashioned Girl’.

But Malcolm, who was unhappy with his performance, says: "The costume was great and the legs, apparently were wonderful, but when the piano played, I just fell apart, I was totally flat."

In another classic comedy scene, Malcolm reveals the behind-the-scenes secrets of his Blackpool Ballroom success whilst partnering Vera Duckworth.

"So you see me whizzing across the ballroom, but there are two people pulling a single bed."

This week, viewers will witness Corrie residents discovering that Norris has sadly passed away.

On Wednesday, Ken and Rita are left intrigued when Norris reveals he wants to meet up to deliver some important news.

But they are heartbroken when they hear from Freda that Norris has collapsed and has been taken to hospital after a suspected stroke.

Along with Mary they rush to the hospital where devastated Freda explains he died half an hour ago.

The following day, Mary and Freda clash over the funeral arrangements - but will they come together to give Norris a proper send off?