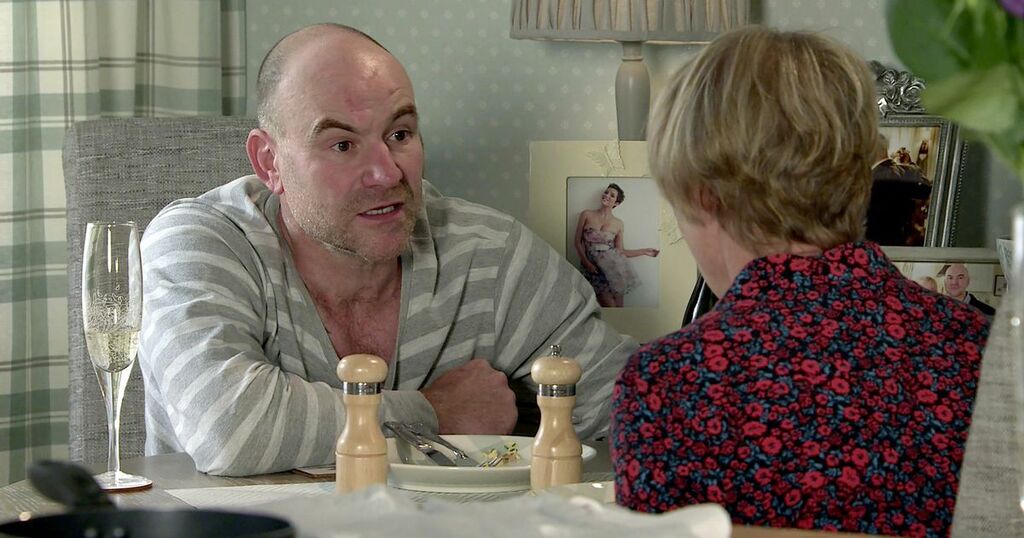 Fans watched on Monday night as the cab driver sat down for a fancy breakfast with wife Sally to celebrate their wedding anniversary.

After tucking into salmon and eggs and sipping on champagne, Sally had viewers in stitches as she remind him that 12 months had passed since Tim was outed as a bigamist.

READ MORE: Corrie stars Georgia Taylor and Will Mellor hit back at fan who complained about soap rules

But she quickly ruined his gesture as she instead picked up a letter from the council.

As viewers know, Sally has made it her mission to encourage the local council to implement resident parking permits as cars keeping appearing on the cobbles.

Pushing Tim's card to the side, Sally opens a letter about the council reconsidering her proposal.

She then ditches her hubby to get back to work with the help of traffic warden Fergus.

But Tim was miffed with his wife when she opened his card, only to look at the front and say, 'Aw'.

And Corrie viewers were quick to mock Tim, after confessing how much he spent on the card.

"Has Tim not heard of card factory? Fiver for a card??" one commented.

A fourth added: "That card cost a fiver? Where did you buy it? Harrods? #Corrie #coronationstreet."

Later, Tim's anniversary plans were ruined further when Sally brought Fergus along for their anniversary meal at the Bistro.