On Friday morning local time, Japanese authorities revealed further cases of coronavirus have been identified among passengers on the Diamond Princess, the cruise ship currently under quarantine at Yokohama port. But experts are warning that keeping the passengers on the ship might not be the best way to deal with the outbreak.

Almost 3,700 people of a variety of nationalities are currently on the ship and an announcement from Japan’s health ministry early Friday morning local time revealed that in addition to the 20 cases already known, further 41 people had tested positive for coronavirus, bringing the total number of passengers infected to 61. Those affected include people from Japan, Australia, Canada, Argentina, The U.S., and the U.K.

The outbreak is linked to a 80 year old man from Hong Kong who was on the ship in January and was later diagnosed with the coronavirus. Of the thousands of people on the ship, 273 have so far been tested for the virus, with new results from 171 tests coming out Friday morning.

“The results of the remaining 171 tests came out and 41 tested positive,” Health Minister Katsunobu Kato was reported as saying.

“It is important to recognize that the 171 tests that there are results for now were not a random sample of people on the ship,” said Michael Mina, an infectious disease scientist and physician at Harvard School of Public Health and Brigham and Women’s Hospital & Harvard Medical School in Boston. “These tests were performed on the people with symptoms. Hopefully these 61 will turn out to be everyone who becomes positive, though we can be fairly certain that other positive results will come up,” he added.

With the number of cases on the ship increasing rapidly, many people are questioning whether keeping the passengers in confined conditions on the ship was, and is the best strategy for minimizing the impact of the outbreak.

“This seems to me to be more a decision made with a focus on preventing spread from the ship to Japan, rather than having the focus be on the passengers. Given the relatively high likelihood that any particular individual on the ship may have been exposed, I can understand why they are taking such strong measures, but I would say that I do not agree with the approach,” he added.

There are 25 confirmed coronavirus cases in mainland Japan at the time of writing this article according to the Johns Hopkins coronavirus tracker, but none of these are thought to be linked to the quarantined cruise ship. Although it is likely too early to tell due to the incubation period of the virus, there is no reason to believe the virus has spread from people on the ship to those on the mainland. So what can be done to help the people on the ship?

“I would not advocate for an evacuation and just let everyone go out into the city, but I think getting people on land and out of the ship is the right thing to do. I think it would reduce risk of disease among those who have not yet been exposed – particularly if the departure of the ship is done methodically and appropriately, with proper safeguards,” said Mina.

Several countries have evacuated their unaffected citizens from places heavily affected by the virus, such as Wuhan and are keeping them in quarantine in specialist locations in their home countries. Could this be an option for the cruise ship passengers in Japan?

“The fear is that there just may be so many exposed on the ship that at this point anyway, the decision makers have decided not to take the risk,” said Mina. “If it was me making the decisions (which it wasn’t and words are cheap), I would have suggested to partner with hotels in Japan and get people off of the boat and into quarantines in hotel rooms. Any evacuation of the ship though would have be tightly regulated and all safeguards in place to maintain the quarantine during transit,” said Mina.

The Diamond Princess has been quarantined at the Yokohama port since Monday and original reports said that people on the ship would be quarantined for 14 days. However, the new spate of cases is likely to affect this.

“The idea of a 14 day quarantine on the ship assumes that no new transmission events will occur in this 14 day window. The idea being that by 14 days they’ll know everyone who has been exposed and be able to deal with all of them appropriately while releasing the rest of the passengers who did not become ill during the 14 day window,” said Mina.

However, this assumes that during the two week quarantine, no new transfers of the virus took place, which considering the high numbers of people now affected on the ship, is increasingly more unlikely.

“I’m not sure this is a good assumption and, despite the extreme quarantine that they are doing, I’d be surprised if, on a ship like that, the virus doesn’t figure out how to transmit during the 14 day window – perhaps through someone delivering food, or some other such activity. If that is the case, then people who may be exposed 10 days into the quarantine might still find themselves in the incubation period once the 14 days are up,” said Mina.

Princess Cruises said in a statement that those affected would be disembarked from the ship today and transported to local hospitals, but it is not yet known what the plans are for those still on the ship.

Another ship, the World Dream, with 3,600 on board is also quarantined in Hong Kong after several crew members showed signs of sickness. Another ship, the Westerdam, coming from Hong Kong is due to dock this weekend at several Japanese ports. But after a suspected case of coronavirus onboard, Japan is expected to deny non-citizens entry to the country. 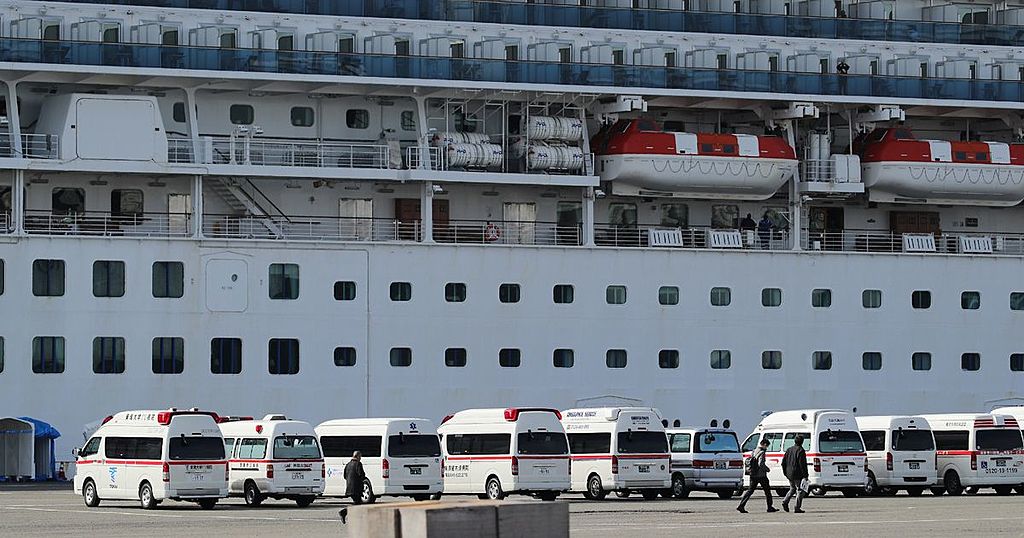 Coronavirus: Brit man on honeymoon infected on Japan cruise ship, says passenger
A British man on his honeymoon is among the 61 passengers on Carnival's Diamond Princess to have tested positive for…

Ten more people among thousands quarantined on board a cruise ship in Japan have been infected by coronavirus, with more…