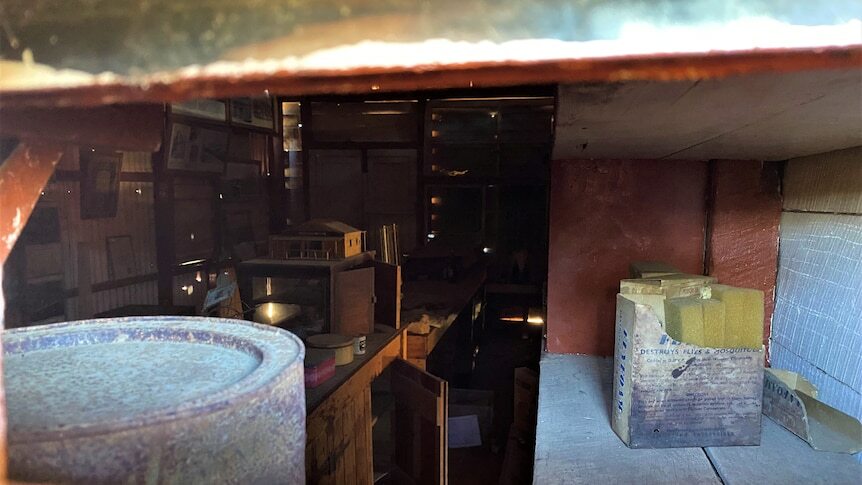 Christmas cakes baked nearly 50 years ago still sit in their tins on the abandoned shelves of an outback store, the only building left on an empty street in what was Queensland's first copper mine.

Copperfield was a thriving frontier town in the 1870s with more than 2,000 Chinese, Welsh, and Australian residents.

At its peak it had two banks, a baker, three butchers and blacksmiths, six hotels, a saddler, a cordial maker, and seven stores.

Beth Duncan, whose family's ancestors first opened Copperfield Store, said it was one of the last physical signs that the town ever existed.

"The only other part of Copperfield that's still here is the chimney," she said.

Mrs Duncan says while it was unusual for the store to have outlived the rest of the mining settlement for so long, it survived because of a family legacy.

"Bob Duncan [last] ran it and owned it," she said.

"His mother ran it until she died and he just took over the running of it.

After falling into disrepair following its closure in 1975, Mrs Duncan managed to welcome visitors into the historic building from 1990.

"My husband and I restored it and opened it to the tourists. They used to come in coach-loads."

Despite being boarded up since 2000, to this day there is still food and furniture sitting in Copperfield Store which was there in 1975 when it first closed.

"[Bob Duncan] walked out, so there was so much stock on the shelves," Mrs Duncan said.

"Tins and tins of honey that are still fine after all that time.

"You'd screw off the lids of the cordial and they'd all be black, but you could smell the fresh raspberry and the sarsaparilla.

"Christmas cakes that went back to 1974 ... you'd lift the lid and you could smell the fruit and the rum and the peanuts.

Bring it back to life

Mrs Duncan says it would be great to see the unique icon reopen again to tourists.

"It's such a shame to see it decaying and not being used now," she said.

"You mightn't be able to smell [the stock] anymore, but it might be fine to look at."

A spokesperson from Isaac Regional Council said the store represented an important part of the lived history of the region.

"Council continues to explore avenues to activate this facility, relative to the age and condition of the building," the spokesperson said.