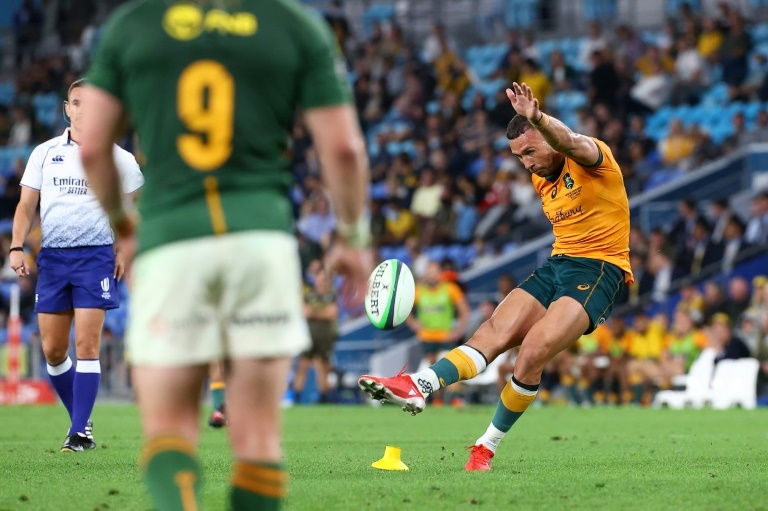 Gold Coast (Australia) (AFP) - Wallabies fly-half Quade Cooper welcomed immigration reforms that could ease his path to Australian citizenship, on Tuesday linking the changes to his last-gasp heroics against South Africa at the weekend.

New Zealand-born Cooper has been denied Australian citizenship four times, despite moving to the country as a teenager and playing 71 Tests for the Wallabies.

The situation, which Cooper has previously described as "awkward", was thrown into sharp relief when he earned Australia a thrilling win over the world champion Springboks on Sunday.

After four years in the international wilderness, Cooper nailed a 40-metre penalty after the hooter to seal a 28-26 Rugby Championship victory, in which he kicked 23 of Australia's points.

The 33-year-old believed his performance generated enough pressure to force officials in Canberra to change their stance.

"Probably without playing that game it wouldn't have come to fruition," he told reporters in the wake of an announcement changing citizenship requirements for "exceptional" candidates.

He thanked members of the public and opposition lawmakers who campaigned on his behalf, saying he was keen to finalise the paperwork as soon as possible.

"I'll be truly grateful to get that sorted."

The problem arose because Cooper recently played two seasons in Japan, meaning under current rules he had been out of Australia for too long to qualify for citizenship.

The Papua New Guinea-born Will Genia faced a similar situation, despite playing 110 Tests for Australia.

While he did not mention Cooper directly, Hawke said the reforms included easing the residency requirements that have hampered the player's application.

"Exceptional people must not be prevented from becoming Australians because of the unique demands of the very work they do that makes them exceptional," he said.

Hawke said the changes would apply to candidates including athletes, business leaders, scientists and distinguished artists.

Cooper said his move to seek citizenship was prompted by border restrictions imposed because of the Covid-19 pandemic.

"To not know if I was able to come back to my home and see my family was quite a daunting feeling when you're living in Japan," he said.

Rugby Australia chief executive Hamish McLennan welcomed the move, saying "if you play for this country, I think you deserve to get citizenship".

Asked if Cooper's standout effort against South Africa had helped his cause, McLennan told ABC radio: "I don't think it hurt."