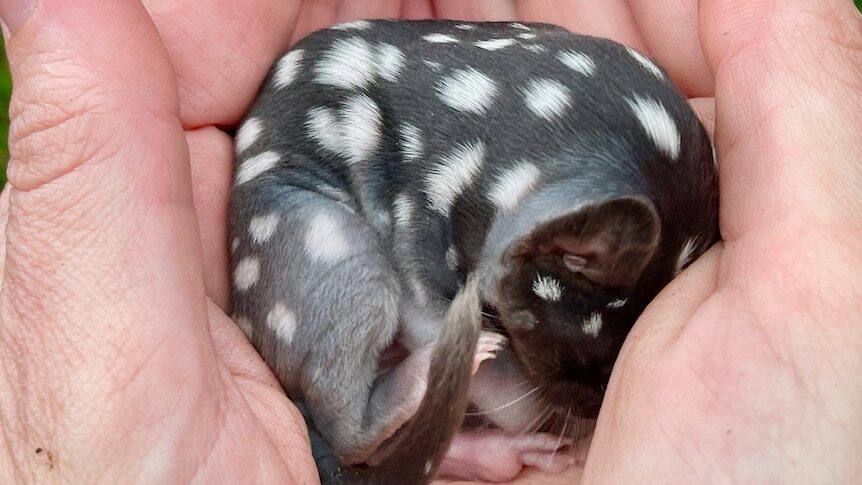 Conservationists are celebrating the birth of almost 30 eastern quoll joeys at a breeding facility in New South Wales.

Eastern quolls are an endangered species and became extinct on mainland Australia about 60 years ago.

The native marsupials were introduced at the Aussie Ark breeding facility at the Barrington Tops on the Mid North Coast in 2017.

The operations manager Dean Reid said the recent arrival of a large number of healthy joeys was great news.

"We are so happy and excited," he said.

The joeys range from one to three months in age.

The Aussie Ark manager of conservation Hayley Shute said it was an encouraging sign.

"These creatures are so important and they fall into a really unique niche in the ecosystem," she said.

"Getting to see them so tiny, inside mum's pouch is like nothing else.

"It's been really rough for the eastern quoll, they have been extinct on the mainland for about 60 years, which is due to ferals; foxes and cats," he said.

"Eastern quolls are much smaller than spotted-tail quolls that you might see around on the mainland.

"They are quite big, like a small cat or dog size, whereas eastern quolls are small, they only go up to about one kilogram for females and about 1.8kg for males.

Eastern quolls remain in Tasmania, but numbers there have also declined rapidly in recent decades.

"Since we are losing the [Tasmanian] devil down there we are seeing a decline [of eastern quolls] by about 50 per cent in Tasmania," Mr Reid said.

"So, it's really important for us here at Aussie Ark to be breeding these amazing animals up."

Mr Reid said since 2017 Aussie Ark had bred more than 150 eastern quoll joeys and there was also a focus on reintroducing the species to the wild.

In 2020, some of the Aussie Ark eastern quolls were released to the Barrington Wildlife Sanctuary, a large, fenced wilderness-style area, seen as one way to gradually reintroduce eastern quolls to living in the wild.

Aussie Ark said in 2020 some joeys had been born and bred in the wild sanctuary area, which was seen as a huge win.

"We have released some [quolls] at Boderee [National Park] and we have a big sanctuary here now ... which is a 400-hectare fenced-in property and we are releasing quolls into that," Mr Reid said.

Attempts to reintroduce quolls to the wild on mainland Australia have so far proved difficult.

The eastern quoll joeys at the breeding facility, however, have a high chance of survival.

"It's just mum in there caring for the joey, so we get pretty much a 100 per cent success rate.

"My job now is to make sure they get the best food they can, we provide all these lovely nutrients for them ... so they grow up nice and strong."

Mr Reid said the quolls were left to do most of the work themselves.

"We pretty much leave them to their own devices, but they are in these lovely little areas with nice nest boxes and lots of little hidey holes and logs," he said.

"We just monitor them over a little while and eventually, when they get big enough ... then we take the joeys out."