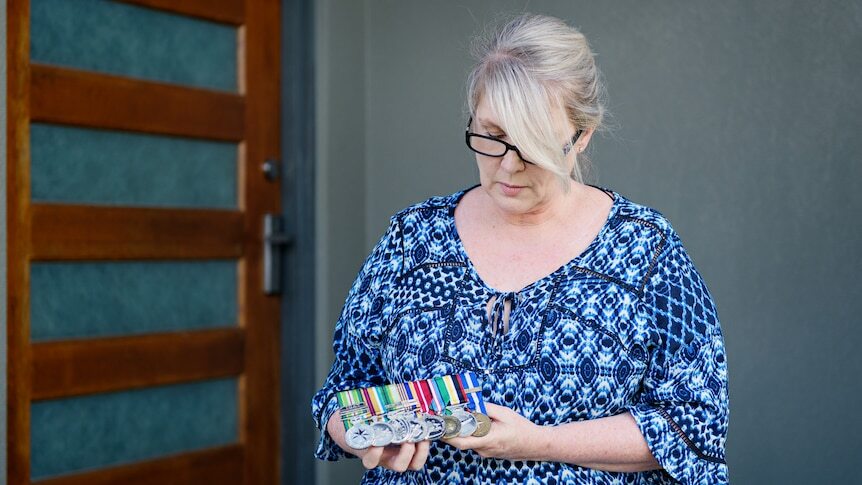 When Jo-anna Egart's husband, Peter, returned to Darwin after serving in Afghanistan in 2014, she did not recognise the man he had become.

"He was initially quite distant," she said. "It took him a long time to want to reconnect with us."

Mr Egart — a veteran who served in the military for 33 years — had also served in Cambodia and East Timor.

But it was his time in Afghanistan that Ms Egart described as the "straw that broke the camel's back".

She said she witnessed her husband's mental health slowly deteriorating and he began to have suicidal thoughts.

"We had to prepare our children for the fact that the absolute worst could happen with Dad."

However, while her husband was able to seek treatment — which he continues to access today — Ms Egart said she was left frustrated by the lack of support available for veterans' family members.

"With defence [force members], when they're unwell, they're placed on medical leave and they're sent home to us, but we don't know what to do with them," she said.

It's stories like Ms Egart's that prompted the grassroots organisation, the Council of Australian Veterans, to organise weekly meetings between veterans and their family members in Darwin.

Every Friday, families gather for a morning tea at a cafe in the city's CBD, where they discuss the mental health challenges many of them are facing and how best to move forward.

Council of Australian Veterans in Darwin's secretary, Samantha Snell, said that, while the families of veterans also bear the brunt of their loved ones' pain, they often go unnoticed.

"The veteran's biggest supporter is going to be their family member," she said.

Ms Snell said attending the meetings could be a therapeutic experience for both veterans and their loved ones.

"We know that supporting people when they're going through a mental health challenge is vital."

Hannah Taino-Spick has been attending the coffee meet-ups in Darwin since they began last year.

She said her partner struggled to transition to civilian life after returning from service, which placed a strain on his mental health.

"It's really good to come in here and connect with these people," she said.

"We're able to connect to talk about the future and about moving forward.

"We've been pillars of support for each other."