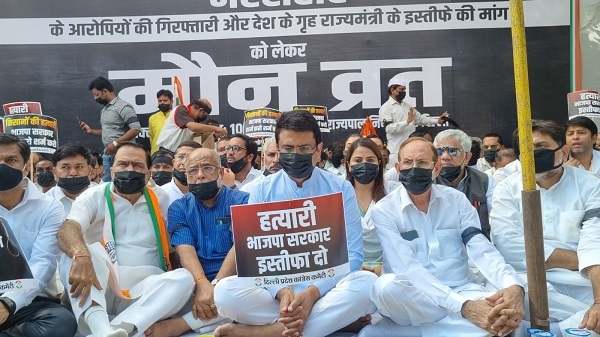 Jammu and Kashmir Congress in-charge Rajani Patil and Congress President Ghulam Ahmad Mir Along with other party leaders and members held a silent protest near the Governor House. The placards they were holding read "Dismiss Ajay Mishra".

.@INCTripura observes #MaunVrat (vow of silence) against the brutal killings of innocent farmers in Uttar Pradesh - demanding the immediate sacking of MoS of Home Affairs - under the leadership of PCC President Shri Birajit Sinha & other senior leaders. #KisanKoNyayDo pic.twitter.com/o86mEBaah5

As a mark of protest, all the office bearers used the Black masks to mark the protest, stated press note issued by Sankalp Amonkar in Incharge of Protest and Vice President G.P.C.C. Maha Vikas Aghadi (MVA) that comprises Congress, Shiv Sena, and Nationalist Congress Party (NCP) has also called for a statewide bandh today in protest against the Lakhimpur Kheri incident that claimed the lives of eight people including four farmers.

As many as eight people including four farmers had died in the violence that took place on October 3. Uttar Pradesh police have so far arrested three people including Ashish Mishra, who is the son of Union Minister of State for Home Affairs Ajay Mishra Teni. The Uttar Pradesh Assembly polls are scheduled to be held in early 2022. (ANI)