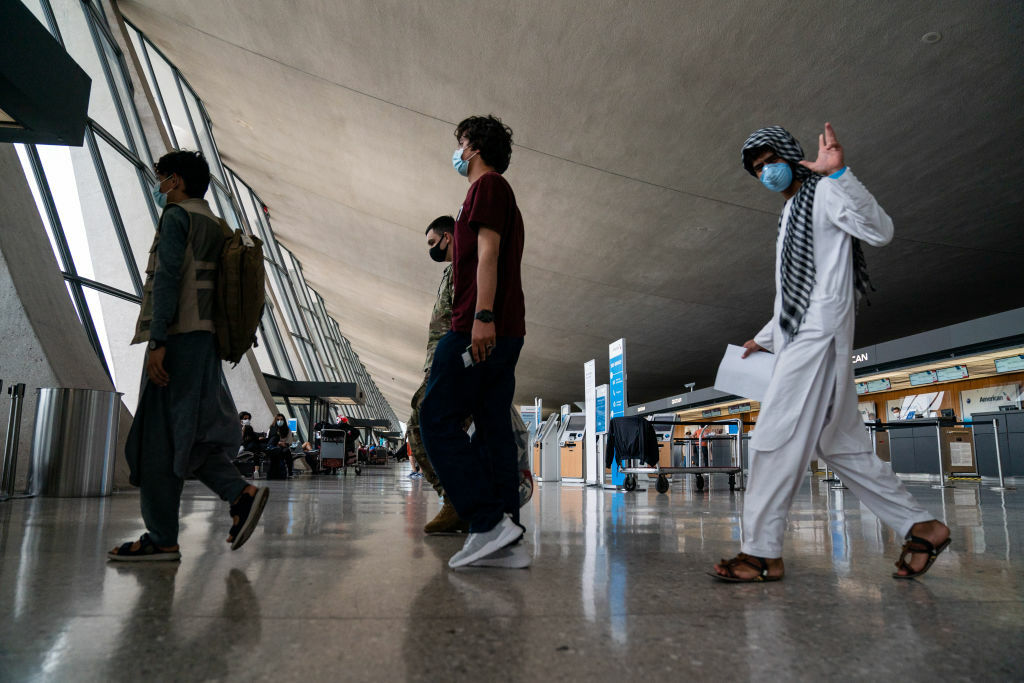 The Senate finds itself in a familiar position after a $40.1 billion emergency funding package for Ukraine passed the House.

The House passed a $40 billion package of military, economic and humanitarian aid for Ukraine Tuesday night.

For many of the Afghans evacuated to the United States last August, their journey remains very much a work in…

WASHINGTON — Congress left out of a Ukraine-focused supplemental spending bill a White House proposal to grant Afghan evacuees permanent protections in the U.S., leaving roughly 36,000 of them in legal limbo.

The move deals a blow to advocates who have spent months urging protections for those who were evacuated from Afghanistan last August but do not qualify for special immigrant visas.

The organization #AfghanEvac, which has worked to secure relief for Afghans, has met with the White House and with lawmakers on both sides of the aisle for months to push for the provisions. The Biden administration asked Congress to include the language in the Ukraine bill.

Shawn VanDiver, a Navy veteran and the founder of the group, has said there has been bipartisan support for the measures, which are known as the Afghan Adjustment Act but have not officially been introduced as a stand-alone bill.

“The work here isn’t close to done,” VanDiver tweeted Tuesday. “We know who blocked this and will press ever harder to get it done.”

The proposal would apply to the tens of thousands of Afghans who do not qualify for the narrow parameters of the Special Immigrant Visa program, reserved for Afghans who directly assisted the U.S. during the 20-year conflict.

These evacuees received temporary humanitarian parole when they entered the U.S., a status granted to immigrants without visas for pressing humanitarian reasons. But they can only attain lawful permanent residency if they apply for asylum through the backlogged system, with average wait times that stretch for more than four years.

There are a dwindling number of must-pass bills on the agenda before the midterm elections in November, leaving few opportunities to pass the Afghan policy as part of a broader bill.

Ultimately, the Afghan proposal was stymied by Republican concerns about vetting as well as senators’ desire to move billions of dollars in Ukraine aid as quickly as possible.

“I do think it’s really important to keep the Ukrainian aid program an aid package about Ukraine, not adding anything to it — even something like the Afghan program that I might support,” Ohio Republican Sen. Rob Portman said last week.

Portman, the ranking member of the Senate Homeland Security and Governmental Affairs Committee, said he had concerns about vetting and screening of Afghan evacuees. He cited an inspector general report from earlier this year suggesting that a few dozen Afghan evacuees were not fully vetted using available Defense Department data, and that some of those individuals could not be located.

Iowa Republican Sen. Joni Ernst signaled concern with screening procedures she said were not tough enough to keep out people affiliated with terrorist organizations. “I’ve said I can’t support the Afghan bills unless those are worked out,” Ernst said.

Even Democrats who had played a key role in developing the proposal, such as Delaware Democratic Sen. Chris Coons, were wary of anything that could slow down the Ukraine funding bill, which the House passed Tuesday night.

“I am clear that we can’t slow down the Ukraine assistance package, and so I agree with the president’s timeline and objective in terms of getting this done no later than next week,” Coons said.

The omission of the provisions prolongs a period of uncertainty for thousands of Afghans who cannot safely return to Afghanistan.

They include Afghans who are extended family members of special immigrant visa recipients and do not qualify as direct dependents, as well as Afghans who supported education, journalism or women’s rights and would face persecution under Taliban rule.

Those Afghans are eligible for protection and some refugee benefits under humanitarian parole for a period of up to two years. They are also eligible for temporary protected status, which includes work authorization and protection from deportation, for a period of 18 months plus any extensions the Biden administration decides to grant.

However, those protections do not provide a pathway to citizenship, and could change under a future presidential administration.

“It’s like living in a hotel,” VanDiver said of the current temporary protections. “An American value is the ability to place down roots.”

Also left out of the Ukraine package was a separate White House proposal that would aim to “undercut Russia’s innovative potential” by making it easier for Russian STEM professionals to work in the U.S.

The proposal would have eliminated a requirement that Russian advanced degree holders seeking employment in STEM industries have an employer sponsor in the U.S. before applying for an employment-based visa.

The Senate finds itself in a familiar position after a $40.1 billion emergency funding package for Ukraine passed the House.

The House passed a $40 billion package of military, economic and humanitarian aid for Ukraine Tuesday night.

For many of the Afghans evacuated to the United States last August, their journey remains very much a work in…