Connect with the people, agitate on the streets and usher in organisational reforms, these three broad themes figured in the Udaipur Declaration that was adopted by the Congress on Sunday after three days of brainstorming at the Nav Sankalp chintan shivir to be battle-ready for the next round of Assembly polls and the 2024 Lok Sabha election.

Beginning with the 2024 Lok Sabha polls, the party announced that 50 per cent of the party tickets would be given to people under 50 years of age in every election, be it Assembly or any other poll. The Declaration also talked about fixing a retirement age for elected representative but didn’t mention any cut-off age.

Expressing hope that the Congress will overcome its current state of affairs, party chief Sonia Gandhi announced a Bharat Jodo Yatra from October 2 that will cover from Kanyakumari to Kashmir “to strengthen the bonds of social harmony that are under stress, preserve the foundational values of our Constitution and highlight the day-to-day concerns of crores of our people”.

Though a key demand of G-23 — the ginger group pushing for internal reforms — to revive the Parliamentary Board was not accepted, Ms. Gandhi announced the setting up of an advisory group from among Congress Working Committee (CWC) members which would meet regularly to discuss political matters. But she made it clear that it was "not a collective decision-making body".

Other significant reforms include adopting the ‘one family, one ticket’ rule , ‘one person, one post’ norm, 50 percent party posts to people below 50 years of age, setting up of a political affairs committee in every State and a mechanism to evaluate the performance of the office-bearers.

Any exception to the ‘one family, one ticket’ rule can be made only when another family member has been working in the party for at least five years. No person should hold one party position for more than five years to give opportunity to new people, the party announced.

The Congress chief also announced compact task force to drive internal reforms, with focus on the 2024 Lok Sabha polls and will cover all aspects of the organisation including structure, rules for appointments to party posts, communications and publicity, outreach, finances and election management.

In the political resolution of the Udaipur Declaration, the party said it was committed to establishing dialogue with all like-minded parties to protect the spirit of nationalism and democracy and would be open to forging alliances according to political circumstances.

Attacking the Bharatiya Janata Party (BJP) and the Rashtriya Swayamsevak Sangh (RSS) for spreading communal divide targeting minorities, poor and the downtrodden for the sake of votes, the Congress said “Indian nationalism” is in its basic character while BJP’s “pseudo-nationalism” is centred on its hunger for power.

In the social justice section of the Declaration, the party reiterated its stand of quota within quota in the women’s reservation Bill and support for the caste-based census but the proposal to seek reservation in private sector and separate reservations for Other Backward Classes (OBCs) in legislature and Parliament were not there in the final resolution.

The agriculture resolution backing minimum support price (MSP) with a legal guarantee, offering free power to powers for irrigation and setting up a national debt relief commission while the economic resolution talked about opposing ‘indiscriminate’ privatisation of public sector undertakings built over 70 years, criticised jobless growth and stressed on engaging with the new age economy.

The Udaipur Declaration is the culmination of the reports that were submitted by six panels on political issues, organisational reforms, economy, social justice, agriculture and youth affairs after three days of brainstorming that was prompted the party’s repeated electoral defeats.

“Exactly 80 years ago, in 1942, Mahatma Gandhi had given the call for Bharat Choro [Quit India]. In 2022, the country’s slogan is Bharat Jodo [Unite India]. This is Udaipur’s Nav Sankalp,”read the Declaration.

The party also announced to launch the second phase of Jan Jagaran Abhiyan on June 15 at every the district to highlight “growing unemployment and intolerable inflation that is destroying livelihoods”. 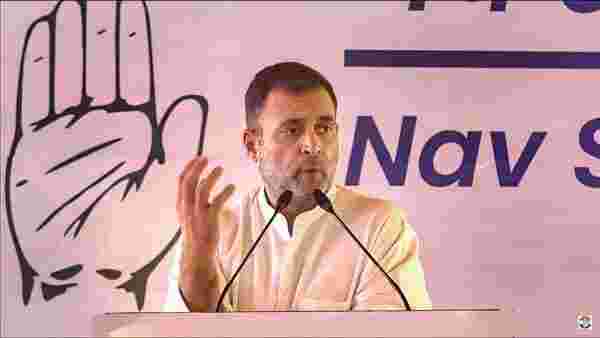 Congress Chintan Shivir: Rahul Gandhi plays up people connect at key event. Read here
Rahul Gandhi emphasised on the fact that the connection Congress had with the people of India is now ‘broken’ and…

Livemint
One subscription that gives you access to news from hundreds of sites
Chintan Shivir | Congress’ connection with people broken, says Rahul Gandhi

Stand with the people instead of focussing on internal matters, says former Congress president

Stand with the people instead of focussing on internal matters, says former Congress president