Confused About Dogecoin? Here’s How It (Doesn’t) Work. 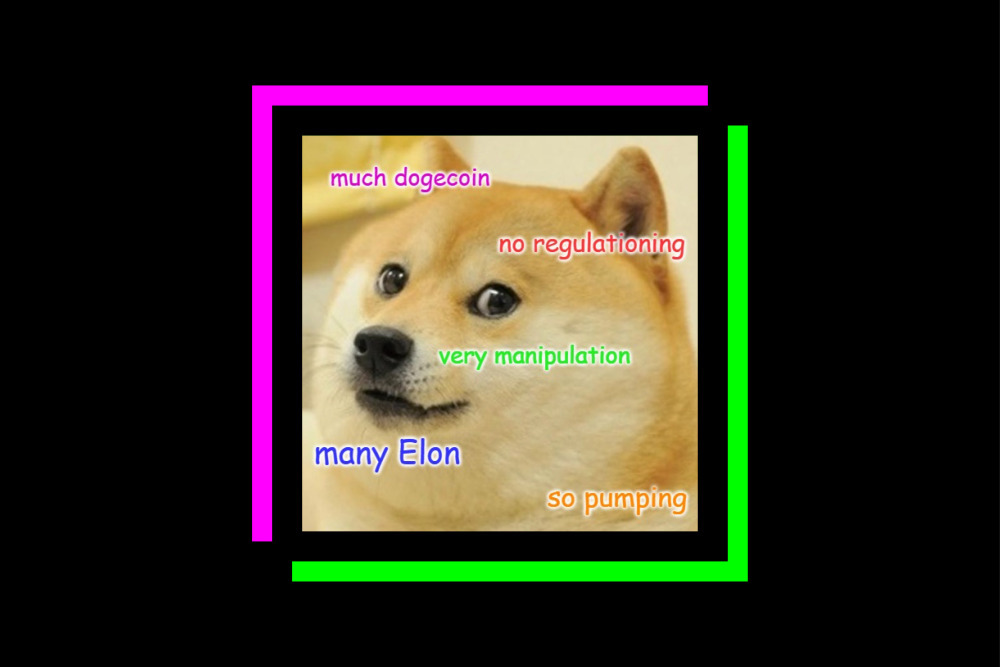 Bitcoin is going through another massive price pump, rising from $19,000 in December 2020 to just over $48,000 earlier this week. Other cryptocurrencies have come along for the ride, and one of the odder beneficiaries has been Dogecoin—heavily promoted on Twitter in the past couple of weeks by Tesla CEO Elon Musk.

In the early 2010s “altcoin” scene, lots of Bitcoin fans created their own magical internet money, so they too could get rich for free: copy the Bitcoin software, change a few details, and launch a new coin that you could trade for bitcoins. Dogecoin (pronounced “dozhe-coin”) was a slightly tweaked copy of Litecoin, which was a slightly tweaked copy of Bitcoin. Dogecoin started in December 2013, at the peak of the first big bitcoin bubble.

Dogecoin was originally a joke cryptocurrency, taking its name from the “doge” internet meme: a picture of a shiba inu dog talking in Comic Sans font. The idea was to have fun and be silly with a cryptocurrency that was cheap enough to mess around with—each coin was worth a fraction of a cent. Dogecoin fans (nicknamed “shibes”) gathered on the Reddit forum /r/dogecoin. They would tip each other dogecoins for amusing comments.

(For full disclosure, I owned six dogecoins—which I did not pay for—in 2014, though they were deleted when I reformatted my laptop and couldn’t be bothered moving the coins over. If I’d just held, I could have made a whole dollar earlier this week.)

The forum got into charity. They raised nearly $30,000 of dogecoins in January 2014 to send the Jamaican bobsled team to the 2014 Winter Olympics. Doge4Water raised $32,000 to supply clean water in Kenya. They did this just by creating their own magical internet money, selling it for bitcoins, then selling the bitcoins for dollars—which was surprisingly feasible at the height of a bubble.

But even fun money is money, and a toy cryptocurrency can be turned into real money; the supply of gullibility is deep, if not infinite. So the shibes started dreaming of getting rich for free—and the hucksters moved in.

A fellow called Alex Green joined Dogecoin. He set up a cryptocurrency exchange in the United Kingdom called Moolah, to handle dogecoins as well as other cryptocurrencies. Most /r/dogecoin users tipped single dogecoins, worth a fraction of a penny—but Green gave tips of thousands of dollars. Green started selling shares in Moolah on /r/dogecoin. He threatened to sue the original Dogecoin founders for harassment, for questioning his use of /r/dogecoin in this way.

Moolah shut down in October 2014, and Green disappeared with the money. It came out that he was actually serial scammer Ryan Kennedy, who had a long history of creating scam start-ups that raised funds and vanished. As well as a serial scammer, Kennedy turned out to be a serial rapist; he was convicted in May 2016 of three counts of rape, and jailed for 11 years.

The remaining Dogecoin community recovered—though the founders had long since been driven away—and continued playing with their coin, unnoticed by the world.

Work stopped on the Dogecoin code; the software was barely even maintained. In the cryptocurrency trading markets, dogecoin was just another altcoin: a low-volume, near-worthless token that gamblers and day traders could swap for other cryptocurrencies, in the hope of making a few pennies.

Cryptocurrencies aren’t useful for anything except trading. The markets are thinly traded, and regulators are all but absent. So manipulation and price-pumping are endemic. “Pump and dump” rings have been around since these digital coins could first be traded for money. The recent bitcoin price rise was, for a long while, curiously lacking in ordinary retail trading volume, until the numbers were high enough to attract press headlines and make the public think something real was going on there.

When the Reddit forum /r/wallstreetbets successfully drove stock in GameStop to all-time highs in mid-January, cryptocurrency pumpers saw the audience they’d been hoping to see for a long time: people who didn’t understand what they were doing and who would put in their own money thinking they were striking a blow against the big guys, while “having fun” doing so.

On Jan. 19, rapper Soulja Boy—most recently known for his involvement in the Fyre Festival debacle—was paid by an unknown party to record a Cameo video advertisement for Dogecoin. He later talked up his cryptocurrency portfolio on Twitter.

On Jan. 28, a Twitter user called “WSBChairman”—who claimed not to be affiliated with /r/wallstreetbets—picked dogecoin as the next potential asset to pump, and the forum followed through. The price of dogecoin rocketed up. Musk, a tech CEO and obsessive Twitter user, tweeted a mocked-up magazine cover called DOGUE and put “$DOGE” in his Twitter bio. Dogecoin rocketed up—and then crashed the next day. But with continued attention from Musk, the price of this near-dead and unmaintained altcoin soared over the following week.

Psychologists have long understood that extrinsic rewards for behavior tend to swamp intrinsic rewards—that if you hook social behavior to money, it immediately becomes all about the money.

On Reddit, users get “karma” points—a score calculated from up or down votes on their posts and comments. These are meaningless internet points. But in 2020, Reddit decided to experiment with “community currencies”—karma points, but as tokens running on the Ethereum blockchain that you could potentially sell for money.

A small version of community currencies was rolled out on /r/ethtrader, the trading forum for Ethereum’s cryptocurrency, in 2019, and a completely predictable disaster ensued. The coins, called “donuts,” affected forum governance and added more weight to users’ votes on polls—so companies astroturfed to farm coins. Moderators changed rules to get more coins for themselves. Many community members moved to a new forum, /r/ethfinance, to get away from the “donuts.”

Money changes everything—and “play money” that you can get real money for will lure in the people who just want the money.

Billy Markus, one of the original founders of Dogecoin, posted an open letter to /r/dogecoin on Feb. 8. He urged the community to get back to the spirit of fun and stop making Dogecoin all about the money. But he still spoke at length about dogecoin as money—“Keep educating yourself as much as you can on how cryptocurrency works, how these markets work, never risk more than you could safely lose, be vigilant and aware.”

Cryptocurrencies are digital objects with no use cases. Cryptocurrency promoters routinely claim all manner of problems their currency will surely solve—journalism, bananas, dentistry—but they always end up with just another digital white elephant. The only way to make money from a cryptocurrency is to sell it to someone else for more money, and the only way they can make money is to sell it on for even more. It’s a hot potato with a price tag. Once you set up this structure, your system follows the logic of cryptocurrencies—and the worst of humanity moves in to sell people dreams for magic beans.

The shibes’ tips of dogecoins to each other didn’t end well, either. The operator of the 2014 dogecoin tipping bot confessed in 2017 that he had stolen all the deposited dogecoins two years earlier. Much sorry, many loss.