Concern is mounting over the movements of a huge column of Russian military vehicles outside Kyiv, amid a lack of fresh information about its position and the threat it poses.

While a US defence official suggested it appeared to have “stalled”, there was also speculation that an estimated 15,000 troops attached to it may be regrouping, and potentially waiting for logistical supplies before an assault on Kyiv.

Efforts to ascertain the status of the convoy and the threat it poses have been set back by recent cloud cover over Ukraine that has prevented Maxar Technologies – which issued the first satellite images of the convoy – from releasing new pictures.

“Heavy cloud cover has blanketed Ukraine,” said Maxar, “and [it has] prevented us from providing new satellite imagery-based updates of the current activity.”

While information about Russian troop movements in other parts of Ukraine where there has been fighting has been well documented on social media, the convoy outside Kyiv has existed in what amounts to an information black hole, suggesting that Russia forces may closely control the territory around it.

The convoy, which at one stage was reportedly about 40 miles (65km) in length, with vehicles pictured three abreast on the P02 road to the immediate north of Kyiv, includes armoured vehicles, tanks, trucks, fuel tankers and artillery pieces. Its presence suggested Russian forces were massing for an attack on Kyiv.

Western defence assessments in the UK and US, however, put a more optimistic slant on the convoy’s apparent lack of progress, although it was not clear what evidence that was based on.

The UK’s Ministry of Defence tweeted: “The main body of the large Russian column advancing on Kyiv remains over 30km from the centre of the city, having been delayed by staunch Ukrainian resistance, mechanical breakdown and congestion. The column has made little discernible progress in over three days.”

The Pentagon spokesperson John Kirby, in a press briefing on Wednesday, gave a more nuanced assessment, saying there had been limited movement from the military force and that it “remain[ed] stalled”. However, he cautioned that lack of movement could be due to Russia’s forces regrouping.

Saying that the convoy had “not made any appreciable progress, geographically speaking, in the last 24-36 hours”, Kirby added: “In general we believe there are a couple of reasons for that. One reason is we believe the Russians are deliberately regrouping themselves and reassessing the progress that they have not made and how to make up the lost time.

“Two, we do believe that they have experienced logistic and sustainment challenges. Challenges that we don’t believe they fully anticipated. Three, they are getting resistance from the Ukrainians. We have some indications, nothing that we can 100% verify, that the Ukrainians have indeed tried to slow down that convoy.” 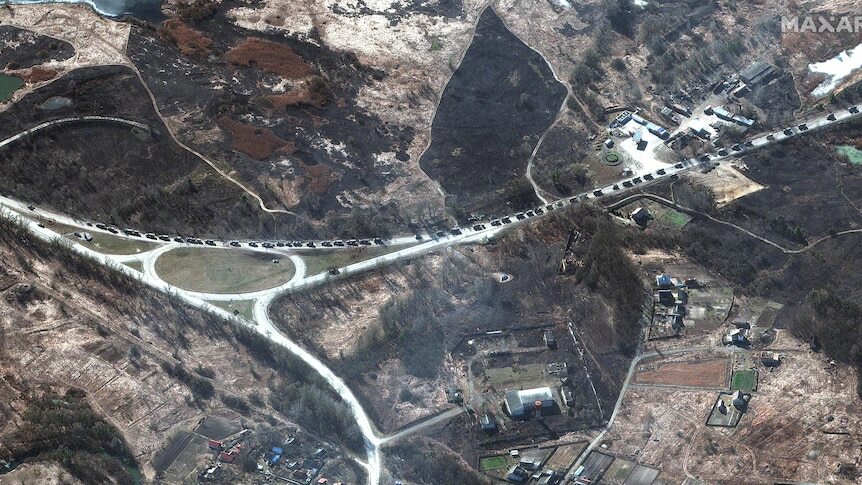 A 64-kilometre-long Russian military convoy is approaching Kyiv. Here's what we know so far
On Monday, a 64-kilometre-long convoy of Russian tanks and armoured vehicles was spotted via satellite on a road to Ukraine's…

Boris Johnson is visiting Poland and Estonia in a show of support for Nato’s eastern members.