Concept cars driving us back to the future 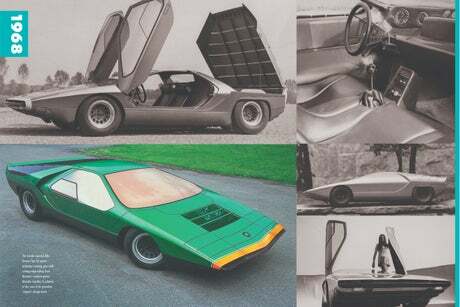 If there’s one thing guaranteed to draw visitors to a manufacturer’s stand at a motor show it’s the ‘concept car’ - often outlandish design studies indicating the maker’s future direction of travel.

Some designs are fantastic flights of fancy with never a hope of going into production, others are advanced designs of models that find their way into car showrooms within months, often as the result of crowd approval at the show.

Now a new book studying some of the more dazzling creations - all from the 1960s - has been written by journalist Richard Heseltine.

Laying out the philosophy behind concept cars - “Caution equals cowardice. Concept cars, dream cars, call them what you will, are meant to break moulds and push envelopes” - this glamorous coffee table-style book roars into life with a look at the very raison d’etre for the genre.

It explains that while many concept cars are ‘one-week wonders’, quickly forgotten when the show closes, others cross continents and become ‘media darlings’ in the process, some even taking on ‘saintly status’.

All, however, says author Richard Heseltine, represent a ‘subspecies of automobile, one where function does not necessarily follow form’. He can say that again.

First car off the mark in this engaging, heavyweight book is the PininFarina  X, designed by Professor Alberto Morelli, championed by Battista ‘Pinin’ Farina himself  - and closely resembling a rocket. Powered by a 1,089cc Fiat engine, it was highly streamlined and claimed to have a top speed of 90mph. “The X didn’t ignite a design revolution, much to the disappointment of its creators”, comments Heseltine. At least it was a more practical proposition than the Curtiss-Wright Model 2500 ‘Air Car’ (see above) that also appeared in 1960, powered by two 180bhp Lycoming engines, one up front, one in the rear. As the author asks; ‘When is a car not a car? When it is a hovercraft...’.

By 1961, the darling of the motor show circuit was the Chevrolet Corvair Sebring Spyder, a dramatically-styled open-top car oozing high performance (above). It never took off, however and General Motors ‘never sentimental about show cars’ scrapped it. The Sebring is followed in 1962, by Ford’s dashing take on the Mustang (below), the Mustang 1, complete with futuristic pop-up headlights, a retractable number plate, fixed seats, adjustable pedals and a telescopic steering wheel.

By 1965, one of the stars of the concept car world was the curiously-designed Fissore Aruanda (below), designed by Brazilian architecture student Ari de Rocha. The ‘one box’ car was designed to run on a petrol engine or on batteries, and intended as a town car, boasting lots of internal space inside a compact, squared-off body. Unfortunately, the high ‘beltline’ made getting in and out undignified, while the huge glass windows and doors meant it warmed up quickly inside, in the sun.

The star of the motor show by 1968 was the Bertone Alfa Romeo Carao, a lurid green wedge-shaped design with doors that opened vertically.

The book concludes with two ‘commuter’ cars - presciently predicting the current direction of travel -  in the form of General Motors’ XP-511, XP-512 and XP-833, the latter being a plug-in hybrid vehicle aimed at urban dwellers.

As Heseltine points out, some of the cars recorded in ‘Yesterday’s Future’ went on to earn legendary status, while also foretelling the future in terms of car designs yet to come. Others, he says, fell a long way short

Most fascinating of all, however, is to thumb through the book and decide, for yourself, which trends and predictions eventually came true, resulting in ideas, looks and technology that has trickled down to the cars we drive today.