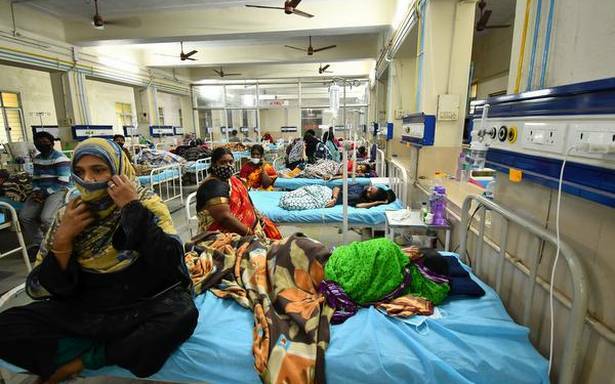 Complaints against private hospitals managements in the State have resurfaced. A few months ago, grievances were about overcharging COVID-19 patients. This time round, they are related to treatment for dengue and other viral fevers.

Director of Public Health G. Srinivasa Rao said some private hospitals are asking attendants of patients to arrange for donor platelets when the platelet count is below one lakh, and charging thousands of rupees. “People have to understand that platelets have to be transfused when the count drops to less than 10,000. A patient can be managed and will recover without platelet transfusion when the count is around 10,000-20,000,” the senior health officer said while addressing a press conference held at the State Health Campus, Koti, on Monday.

Asked what action was taken against such hospitals, Dr Srinivasa Rao said that changes in the hospitals’ practices cannot be brought about by shutting the hospitals or by taking punitive action.

However, one can lodge complaints with the District Medical and Health Officer (DMHO) concerned, he said. Asked what form of justice can be expected if such hospitals are not shut down, he said, “We have to strengthen our laws and try to bring about behavioural changes in hospitals. They are in the medical profession. They have to act in a noble manner.” Similar complaints were observed in 2019 when the incidence of dengue had spiked.

Cases of dengue, malaria, and viral fevers are expected to decline by the end of September or mid-October.

The senior health official said that people have already spent hefty amounts of money for COVID treatment at private hospitals and it is not justified to cause further financial inconvenience to people in the name of dengue treatment. He stressed that all arrangements were made at government hospitals to provide treatment for dengue and malaria.