Comparing Tesla Model S To The Kia EV6: Does It Make Sense?

Alex Dykes, of Alex on Autos, chose to produce a video comparing two electric cars you might not consider rivals: the Tesla Model S and Kia EV6. While people sometimes wonder why we chose to compare any two EVs, it's simple. If they're both electric cars – of which there are still few options, and many don't directly compete with one another – it never hurts to compare them.

While the Tesla Model S is a $100,000 flagship premium sedan, the Kia EV6 is a mainstream electric crossover that starts at $44,000. That said, both are notably sporty, eye-catching, and exceptionally roomy on the inside. They also offer plenty of range, engaging performance, and intuitive tech features.

If you've always dreamed of a Model S but couldn't afford it, you may be considering a less expensive option. The Tesla Model 3 likely comes to mind, but it's not as roomy as these rivals. You could step up to the Model Y, though it starts at $63,000, which is almost $20,000 more than the somewhat similar EV6. Obviously, we could visit many other scenarios here, but the point is that it almost always makes sense to compare two vehicles that have anything in common.

Dykes goes into plenty of detail in the 25-minute video comparison of the Tesla Model S and Kia EV6. He calls the Model S the benchmark and the EV6 the value alternative, which makes perfect sense. Dykes asks, "If you're shopping for an EV, what does an extra $44,000 buy you?"

In summary, he says the extra chunk of cash will get you quicker acceleration times, better handling capability, more reliable DC Fast Charging, and a larger frunk. Clearly, there's a lot more to consider, and Dykes addresses it in the video.

After it's all said and done, he concludes that "without a doubt" the Model S is the better EV, but you have to ask yourself if it's worth nearly double the price of the Kia. Depending on the trim, the Model S actually costs more than double the EV6. The dual-motor all-wheel-drive EV6 starts at $50,900. It's worth mentioning that this is also $12,000 cheaper than the Model Y without any tax credits. The range-topping EV6 starts at $55,900.

Dykes intends to compare the EV6 to the Model Y (obviously its more sensible rival) if and when he can get his hands on a Model Y. He had access to the Model S, and not comparing it to the EV6 would have been silly. 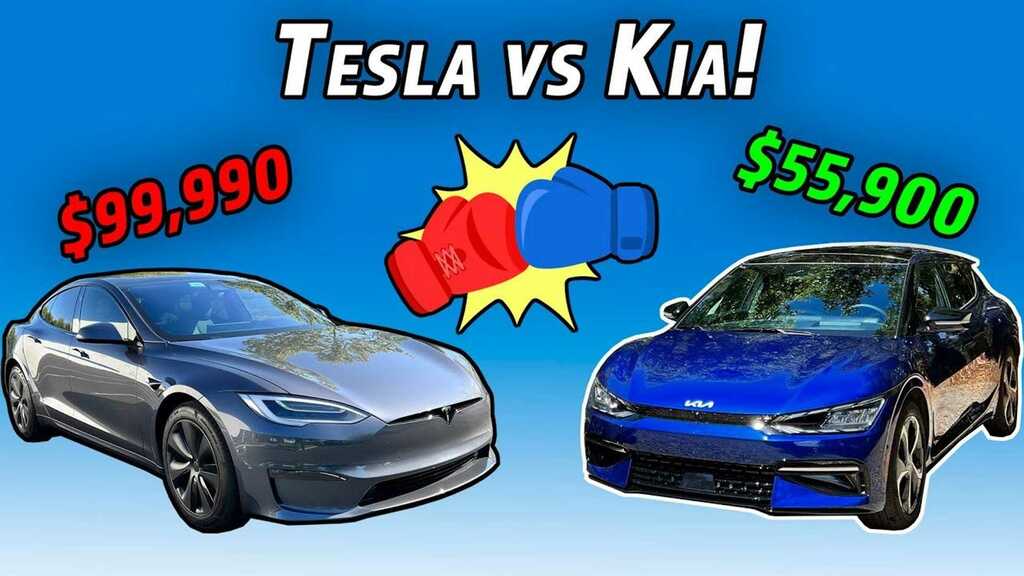 Comparing Tesla Model S To The Kia EV6: Does It Make Sense?
The Model S set the standard, and the EV6 is a budget-friendly alternative, so it's interesting how these EVs stack…

Euro NCAP announced the third round of safety test results for 2022, which includes the all-electric 2022 Kia EV6, which…