Commuting to school a risky path for kids 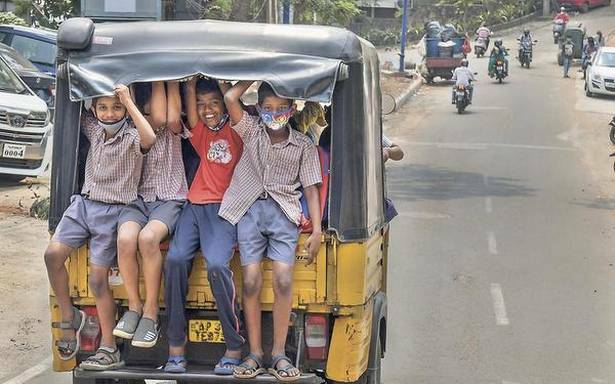 Numbering over 500 million according to the Census 2011, children below 18 years of age face a high degree of risk while commuting to and from school due to poor road planning, limited enforcement and poor traffic behaviour across 14 Indian cities, according to a study.

The pandemic had added another layer of danger to these existing factors for school students and there was a need for safety policies for students at both the national and State level, the report observed.

The study, titled ‘National Study on Safe Commute to School’, and carried out by the SaveLIFE Foundation and Mercedes-Benz Research and Development India (MBRDI) to highlight gaps in road safety for children, posited that although millions of students travel to school everyday, many schools do not provide the option of school-affiliated transport.

This, even as over 30 children below the age of 18 died in road crashes every day, or over 11,000 in total during the year 2019, according to data from the Ministry of Road Transport and Highways (MoRTH). The Ministry’s data stated that 11,168 deaths of children aged below 18 years were recorded in 2019, registering an increase of 7.4% compared to 2018.

The study, conducted after the outbreak of the pandemic, analysed responses from 11,845 respondents including 5,711 children of Classes VI to XII and 6,134 parents with children in Classes I to XII across 14 cities.

The number of respondents utilising school vans and choosing to walk to school – 1,374 and 1,332 out of the total 11,845 respondents – constituted 12% and 11% of the total, respectively adding up to the same percentage as those using school buses.

The largest number of respondents who, or whose children, commute to school by walking were found in Mumbai and Bengaluru. As many as 47% of the respondents commuting to school on a cycle stated that there are no separate cycle paths for their mobility implying that they have to move along with motorised traffic, which potentially exposes them to a greater risk of road traffic injury. This proportion is especially high in Vijayawada (87%), Patna (72%), and Delhi (63%).

The maximum respondents to flag the non-availability of transportation facilities to and from school were from Ahmedabad followed by Chennai and Delhi.

A city-wise analysis revealed that in Delhi 59%, Ahmedabad 76%, Chennai 61%, Mumbai 53%, Pune 51%, and Vijayawada 56%, a majority of the children did not have any transportation facility in their school, followed by 47% in Jaipur and 46% in Bengaluru.

When respondents who commute by walking were asked whether there were any alternate modes of transport, more than two-third or 67% of the respondents reported that there was no alternative available for them to commute to school other than walking.

On the other hand, almost half – around 47% or 2,579 of the 5,489 respondents using school transport – admitted that their school vehicles were not equipped with seat belts, as many 30% of the children surveyed said they witnessed a crash during their commute to school and 6% of them were involved in a road crash or a near-miss situation during their commute to and from school.

When asked about the impact of the crash, most parents across cities (74%) reported that their child did not have any injury – the percentage being highest for Bengaluru (100%) and lowest for Chennai (33%). It was also revealed that 4% of the parents in Chennai and 5% of the parents in Jaipur stated that their child had died due to the road crash.

The report was in favour of policies for ensuring safe school transport at both the national and the State level to issue guidelines for schools, parents and road authorities to follow, so that risks to road safety are mitigated during school commute.

As the pandemic still looms large, the policies should be inclusive of the sanitisation and social distancing requirements to prevent the risk of contracting COVID. The policies should also contain guidelines for all modes of commute, the report stated.

“As of date, over 25 States and Union Territories have announced the reopening of schools. While there is a vaccine for COVID, the vaccine for child deaths on our roads is really our collective action,” said SaveLIFE Foundation Founder & CEO, Piyush Tewari.

“Our findings through this report have once again emphasised that the right to safe commute to school is as important as the right to education itself. A comprehensive national and State school transport safety policy can ensure that,” he added.

Manu Saale, Managing Director and CEO, MBRDI said, “The findings from this study show unequivocally the rising need for road safety in the country. We hope that this study will help all stakeholders further extend our vision of zero casualties to all modes of road transport.”