Community in limbo as vital roadworks left unfinished for months 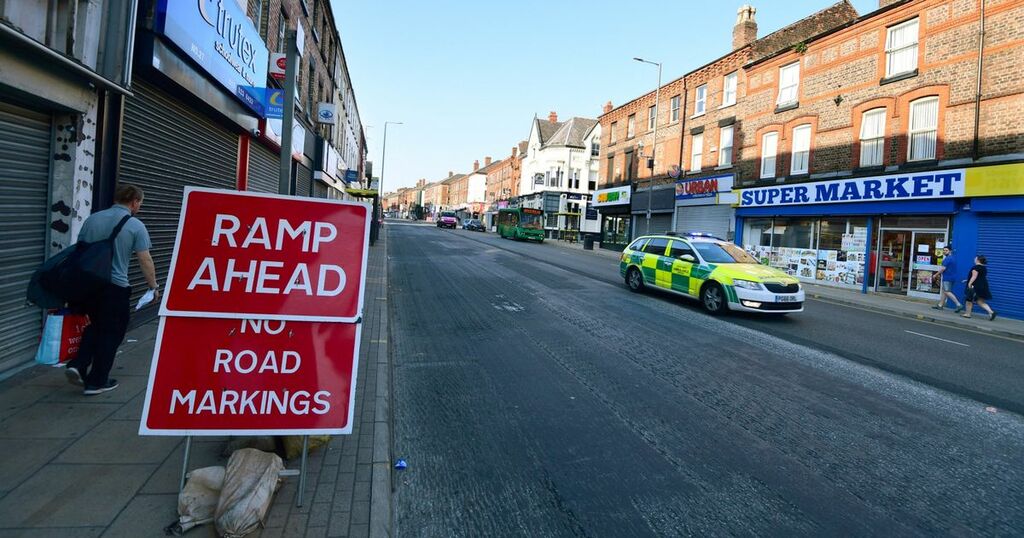 People who live and work on one of the main routes into and out of the city opened their hearts about the amount of disruption they are experiencing.

County Road in Walton has been left in a half-finished state for months after the original contractors collapsed into administration.

It means around a mile of the busy road has been left untarmacked, with ramps, raised manholes, temporary barriers and road signs warning of the danger.

In the meantime, the ECHO heard numerous accounts of road rage as drivers negotiate the unmarked road, along with minor collisions, people being sprayed with water - sometimes deliberately - from accumulated surface water, along with businesses suffering while still struggling to recover from lockdown.

Jenny Sheridan, the third generation of her family to run Bridesworld Liverpool, said: "When the work was first carried out, they managed to cement the shop shutters down and it took three days to open the shop.

"The people working on the site were not helpful at all.

"It's also caused damp and damaged all the front of the shop. Rats were also getting in underneath.

"One of my customers, who is 75 years old, fell as she was crossing the road and tripped on the raised bit.

"It's been going on for a long time. They promised the world but nothing got done."

Paula Towner, animal rescue manager at the Animal Aid charity shop, said: "With all the raised manholes, dips and ramps, they're like little speed bumps. It plays havoc with the suspension on the cars. It needs sorting out.

"People are avoiding coming down here because the road is doing damage to their cars."

Tracey Williams, who works part-time at Dennis's Hair Design, said: "When it rains, the road floods as the grids are not taking the water in, and I've seen elderly people fall on the raised section running down the middle of the road.

"It's just unsightly and it's been going on for far too long. There are no yellow lines, so people are just parking anywhere.

"I see lots of people in their yellow jackets taking pictures, but nothing seems to be happening. The way it is now, they'd have been better leaving it like it was."

Craig Chadwick, who works as a dog washer at Sweeps Dog Grooming, said: "It's more of an eyesore than anything. It's a bit uncivilised - it's just a stretch of road with no road markings on it.

"It feels like the raised ironworks are destroying the wheels of the car."

Terry May, who runs Bernie May's bar and boutique hotel, said: "The hotel sleeps 28 people and I've had people coming from all over the country and the world to stay here, but I've had to close it for the time being because of what's going on with the roads.

"It's become quite tiresome for me and the staff to deal with. With no yellow lines, people are parking up anywhere they want.

"There's no traffic management and we're getting angry and frustrated. All we ask is to be kept up to date about what's going on and when it's going to be fixed."

Jamie Morris, who works at County DIY, said: "All this work was done and they came back at night and ripped it up again. It's been left like that for months.

"You have the bottoms of the cars scraping it. No-one's going to get any compensation for it."

Lynsey Meadows, owner of Flowers by Lynsey Meadows said: "It's annoying and it's also not good for the cars. My tyres are always going down because of the potholes.

"It also looks terrible. It's been like this since last year, and there were roadworks going on before that as well. They finished the road and then dug it back up.

"It's the way it's been left like that, that's what's getting people annoyed."

Danny Khader, who works at Danny's Barbershop, added: "It's horrible. I don't know why they don't fix it.

"I've seen cars hit each other at least three times when they slow down because of the ramps. You also get beeped, sworn at, and get the finger.

"It's affecting people in the road and we're getting less customers. I had to help an elderly woman when she was deliberately splashed by a car. She was shaken up."

Tracey Williams, who runs Tracey's childrens' wear said: "It's bad, especially when you hear the heavy wagons going over the ramps. You hear a bang, and we just jump and it makes the babies scream.

"It's dangerous, it's a hazard, and something bad is going to happen one day."

Bonnie Rutherford, who works at Harlech Castle pub, said: "It's an accident waiting to happen, especially when you're driving."

VIAM, previously known as King Construction, was one of the council's preferred contractors which was plunged into administration earlier this month after cashflow problems.

This left a number of ongoing council schemes unfinished around the city - which included County Road (A59).

After issuing a termination notice to VIAM, which went into administration on June 1, the city council gained permission to appoint Siemens to complete the traffic signals installation along the road.

It was "anticipated" that Siemens would be on site at the beginning of July, with traffic signals installation taking a few weeks to complete, which would then be followed by resurfacing works.

However when the the ECHO visited this week, there was still no sign of any work taking place along the road.

A Liverpool council spokesperson said it was about to appoint a contractor for the County Road resurfacing scheme. A start date would be announced once legal terms and conditions had been arranged.