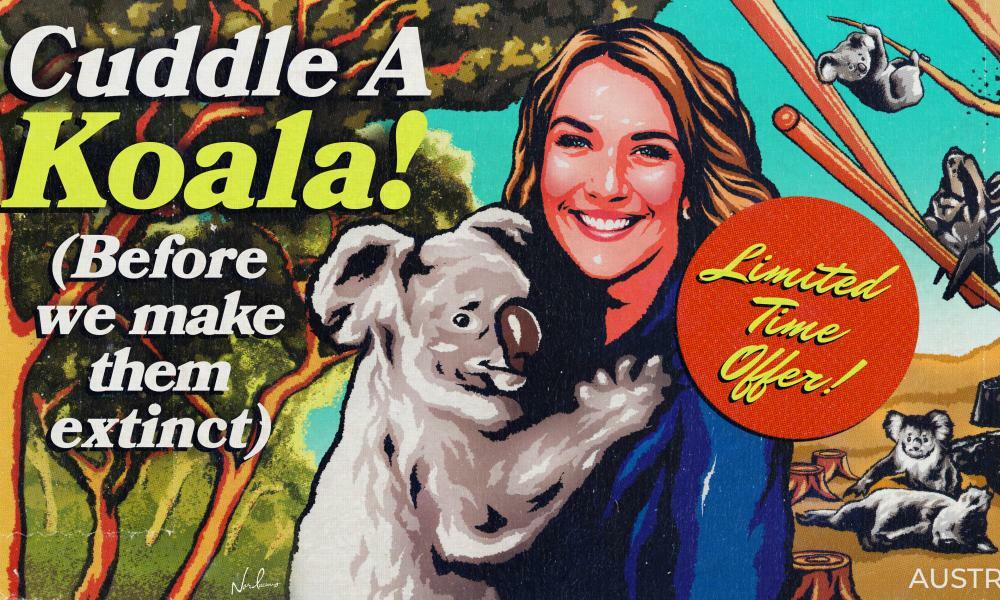 Times Square’s biggest billboard will this week display for 10 minutes “subversive” satirical messages criticising Australia for its inaction on the climate crisis.

The campaign is the brainchild of the Australian comedian Dan Ilic who raised $140,000 through a fundraising campaign titled “jokekeeper”, which aims “to ridicule fossil fuel supporting parties in the upcoming federal election”.

Ilic said the idea came to him while watching the Australian government respond to the pandemic with a “gas-fired recovery”.

“All these people decided the best way to beat Covid was to build a gas pipeline,” Ilic said.

“I think that was the moment where I said, ‘Hold on, maybe this government doesn’t give a fuck about us at all?’ Australians want to be proud of our position in the world and this government gives us no reason to be.”

The aim of the campaign is to buy space on a billboard in Glasgow ahead of the Cop26 international summit to “say what everyone’s thinking” about Australia’s climate change policy. It will also feature billboards with similar messages in marginal seats in Australia ahead of the next poll.

But New Yorkers will get a sneak peek on Thursday evening local time – Friday morning in Australia – when a “precursor to Glasgow” will appear on the largest billboard in Times Square, a 20-metre-high screen known as “Godzilla” that claims to be the third-most Instagrammed spot in the world.

The eight billboard artworks that have been developed to date will play on a loop for 10 minutes as a cost of $20,000 ($US12,500). The screen will show slogans including “Cuddle a koala (before they’re extinct) – limited time offer” and “Dear World … yeah, look … sorry about our government bullsh**ing about our emissions targets – Australia”.

This week, the campaign caught the attention of the actor Russell Crowe, who highlighted it on his Twitter account.

The billboard campaign marks a new twist in Ilic’s career, which has been intertwined with that of the Australian prime minister, Scott Morrison.

Ilic’s break-out moment came in 2007 with a dark parody of the Where The Bloody Hell Are You campaign that Tourism Australia released during Morrison’s tenure. The government agency responded by sending Ilic a cease and desist letter.

Later in 2019, Ilic made a remake of the parody with detainees on Manus Island, which ended with him getting deported from the island.

Now, with a federal election looming, Ilic said this poll was the “most important” the nation had faced as it would “determine how many gigatonnes of fossil fuels remain in the ground instead of ending up in the atmosphere”.

“It’s up to us to stop that from happening and that’s what I’m doing. I’m making jokes. That’s my power. Other people should use their powers in their own way. I’m buying billboards because I don’t hold a hose, pretty much.”