MIAMI — A Colombian businessman held in Miami on charges of paying bribes to Venezuelan government officials worked as a confidential informant for the U.S. Drug Enforcement Administration and turned over millions of his profits to the DEA before he failed to surrender in 2019, according to a federal court document unsealed Wednesday.

Alex Saab, 49, who is close to Venezuelan President Nicolás Maduro, started communicating with DEA and FBI agents in Bogota, Colombia, about his planned cooperation in 2016. With his lawyers he continued those discussions with federal agents and prosecutors through June 2018, when he signed a “cooperating source agreement” with the DEA, the court document filed by prosecutors says.

For nearly a year, Saab reported paying bribes to Venezuelan officials to secure illicit food, housing and other contracts totaling hundreds of millions of dollars with the government. Saab communicated with DEA special agents “via telephone, text and voice messaging,” the document says, and he “engaged in proactive cooperation,” meaning he recorded conversations with co-conspirators targeted in the U.S. investigation.

Saab also made four wire transfers totaling than $12 million of his Venezuelan contract profits to a U.S. bank account controlled by the DEA as part of his cooperation with the agency, the document says.

But when Saab failed to surrender to the DEA by May 30, 2019, his cooperation deal as a federal informant ended.

The prosecution’s document, dated Feb. 23, 2021, had been under seal at the request of prosecutors in the U.S. Attorney’s Office, who at the time were negotiating to extradite Saab from the Cape Verde Island off the west coast of Africa, where he was arrested in 2020 to face a money laundering indictment in Miami. While detained there, Saab was challenging his federal indictment and status as a fugitive.

Last year, U.S. District Judge Robert Scola agreed with the prosecutors, denying Saab’s challenge as premature. But the judge waited until Wednesday to unseal the document, saying the public interest in the case outweighed the risk to his family in Venezuela, which had been given time and opportunities to leave the country.

“Although the defendant argued that his family may be in danger in Venezuela, these matters have been sealed for almost one year and the defendant could not proffer any efforts the family has made to leave Venezuela and have even failed to accept an offer from the [U.S.] government to assist them in leaving Venezuela,” Scola wrote in his order.

The revelation of Saab’s informant work is only the the latest surprise in the high-profile case in Miami federal court.

In early November, prosecutors agreed to dismiss almost all of the lengthy indictment against Saab, who is accused of laundering $350 million in Venezuelan government funds, including wire transfers into South Florida’s banking system. The dismissal of all but one main conspiracy count was done as part of a secret deal made with the Republic of Cape Verde to gain his extradition to the United States, according to court papers.

Saab, however, still faces up to 20 years in prison on the lone remaining money laundering charge involving a scheme prosecutors say ripped off money from a Venezuelan housing program that was supposed to benefit the poor in the economically depressed country.

The other seven money laundering counts in Saab’s indictment, each also carrying up to 20 years in prison, were dismissed by Scola as part of the deal with Cape Verde, where Saab had been arrested in July 2020. Federal prosecutors said in a court filing that Cape Verde authorities agreed to extradite Saab in October only if they could be assured that he would serve no more than 20 years in prison for his money laundering offense — the maximum allowed under that country’s similar laws.

“On September 7, 2020, during the extradition process, the United States sent an assurance through diplomatic channels to the Republic of Cabo Verde that the United States will not prosecute or punish defendant Alex Nain Saab Moran for more than a single count of the indictment, in order to comply with Cabo Verdean law regarding the maximum term of imprisonment,” federal prosecutors Kurt Lunkenheimer and Alexander Kramer wrote in the motion to dismiss seven of the eight money laundering charges in the indictment.

Saab, a Colombian businessman close to Venezuelan President Maduro, has pleaded not guilty to the sole money laundering conspiracy charge accusing him of siphoning the $350 million from the Venezuelan government by bribing officials to secure building supply contracts for low-income housing.

Saab was carrying a Venezuelan passport when he was arrested last year in Cape Verde en route to Iran on what he called a humanitarian and medical mission. He claimed to be a Venezuelan diplomat who was immune from prosecution as he fought his extradition before the Cape Verde court, but to no avail.

Now in custody at the Federal Detention Center in Miami, Saab is the latest suspect to be charged in connection with a series of corruption and money laundering cases filed in the United States that accuse dozens of current and former Venezuelan officials, business people and lawyers of stealing billions of dollars from Venezuela’s government and its state-run oil company, PDVSA.

Saab was charged along with Colombian national Alvaro Pulido Vargas, 55, a fugitive who still faces the original eight-count money laundering indictment in Miami federal court. The pair are accused of paying off Venezuelan government officials to obtain contracts to supply building materials for low-income housing projects between November 2011 and September 2015, according to the indictment filed in 2019. 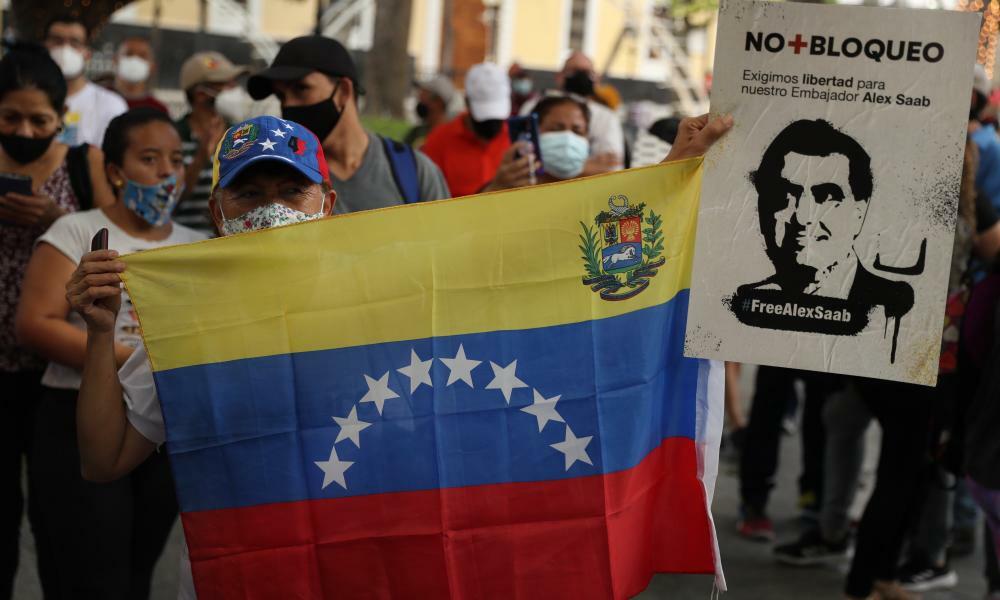 Handcuffed and shackled, former Honduran President Juan Orlando Hernandez arrived at his first extradition hearing on Wednesday, where he was…

Juan Orlando Hernández, once a key US ally in Central America, handcuffed and taken away in Tegucigalpa