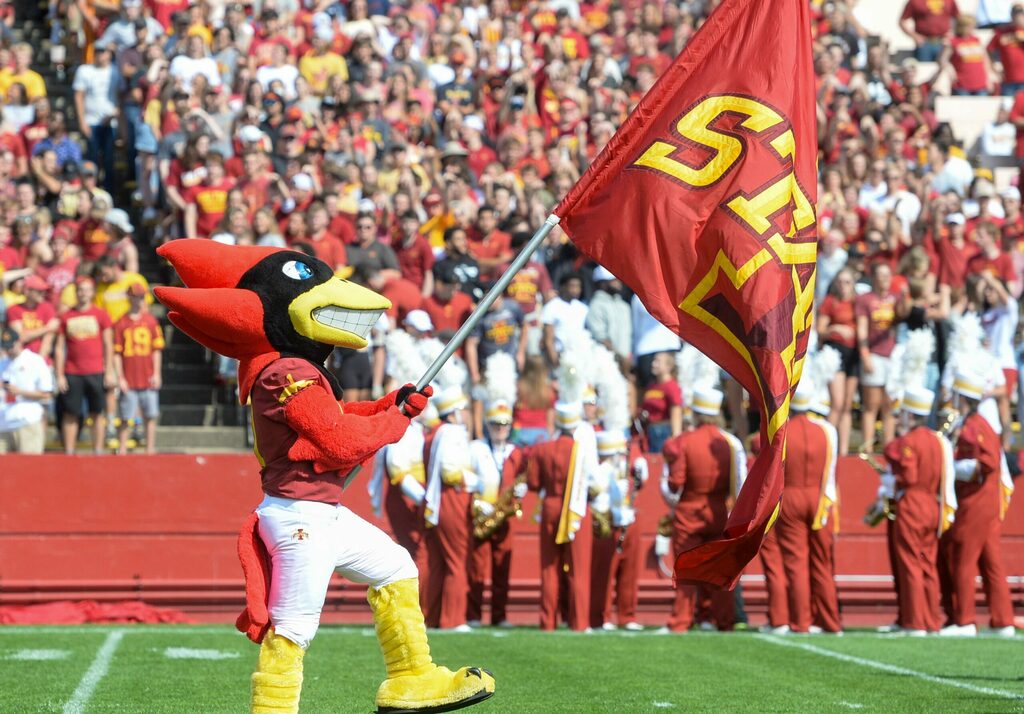 As always, the Watch Grid sorts your Saturday into three watchability columns. As always, watchability is not strictly about game quality, team quality or quality of any kind. These things matter, though, I guess.

So far, this season feels like a relatively normal one, I think? Compared to the previous one, at least? Week 0 felt exactly like Week 0, and Week 1 was also true to form. If history is any guide, Week 2 will be the usual handful of rival games played way early for some reason, along with most of the good teams digging into Cupcake September. Now let’s look at the schedule and see if that’s the case.

Confirmed. And I get it. It’s September. Everyone wants to get backup reps and collect some Ws before conference play. It’s just a shame the heavyweights can’t be bothered to choose more challenging non-conference opponents. Aim higher, Coastal Carolina.

Oh, and there is no Division I football on Thursday. Make do as best you can. 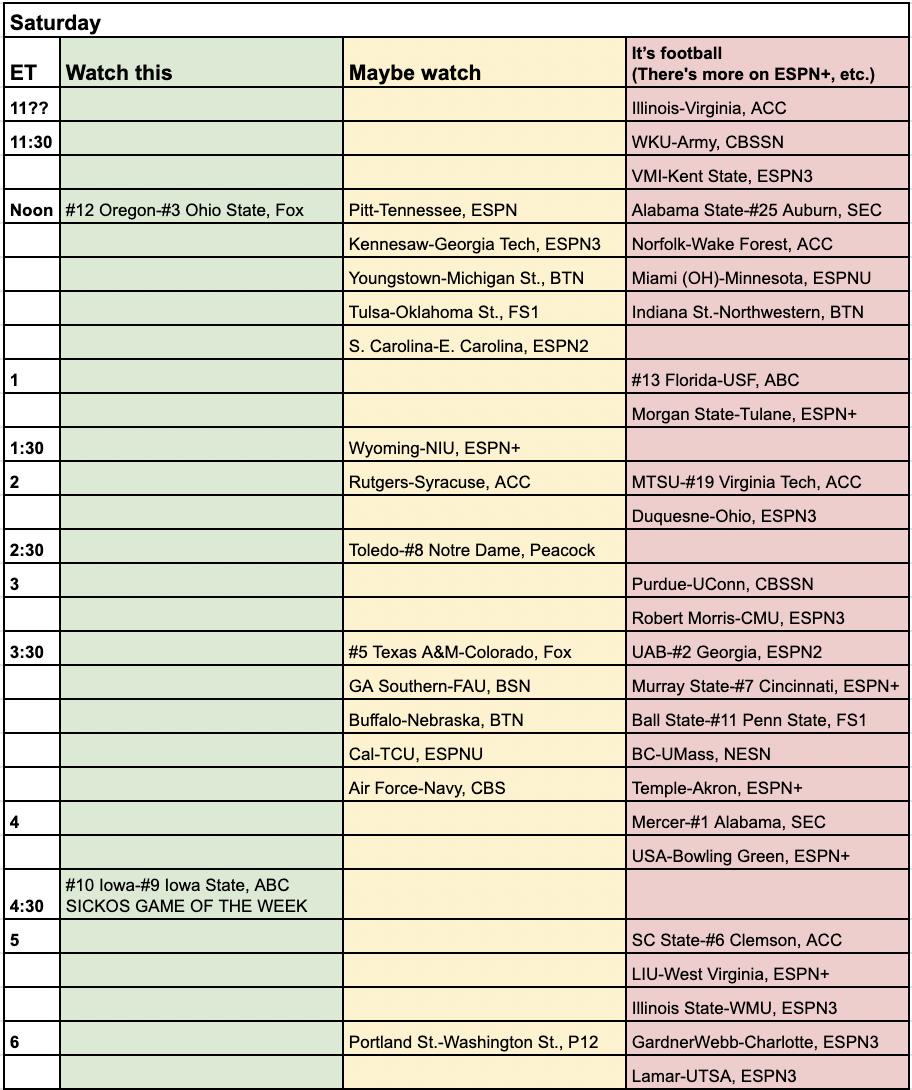 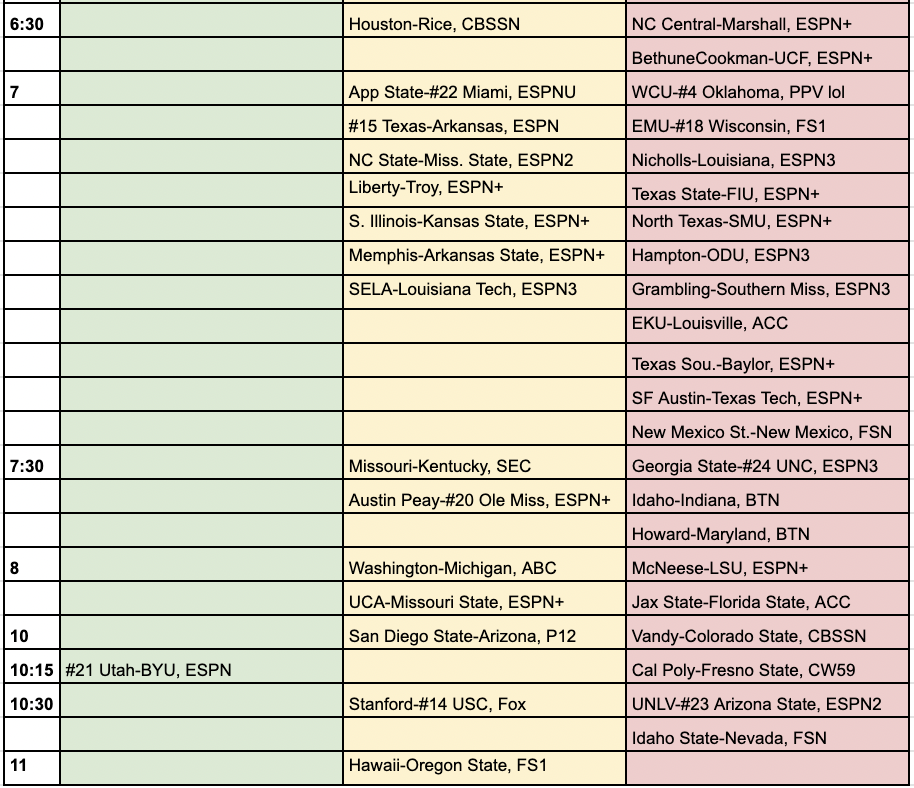 Why is Illinois kicking off at 10 a.m. Illinois time? We usually get started this early when someone’s playing in Ireland, but Charlottesville isn’t in Ireland, if you ask me. Assume no explanation will be offered.

Week 2 is typically among the Watch Grid’s most generous weeks, in terms of promoting games to Maybe Watch status. To be fair, we don’t know for sure which of these teams are really bad yet. And to continue being fair, we like bad football just fine anyway.

SICKOS GAME OF THE WEEK

The rare circumstance in which the weekend’s AP Poll-anointed game, College GameDay game, most disdainful rivalry game (alongside Utah-BYU), and SICKOS game are all one and the same.

Why the latter honor for Iowa-Iowa State? Where to begin.

The two teams have distinct football personalities, in addition to the different flavors of the chips on each fanbase’s shoulders. Iowa, the epitome of Big Ten West lumberball, fantasizes of winning by 4-0 margins. Meanwhile, Iowa State is one of the most carefree Big 12 teams, content to win by 99.4-99.3 in octuple overtime, especially if that offends the opponent.

But when the Hawkeyes and Cyclones collide, something bad happens. The game becomes either Hawkeyes-Hawkeyes or Cyclones-Cyclones. In 2017, the Hawkeyes had the country’s No. 108 offense in yards per play, yet beat the Cyclones in a 44-41 debacle. The following year, Iowa State’s FBS-average offense vanished down a 13-3 memory hole.

Making matters even more dire, both teams usually become Iowa. The final score has gone under Vegas’ points total 12 times in the last 15 meetings, per OddsShark’s database. The decisive play in their most recent meeting was a punt.

Now things get even weirder, because the Cyclones are favored for once, by almost a touchdown. And weirder still, because for the first time in 68 meetings, both teams bear top-10 rankings. We’re in uncharted waters, but at least those waters are clean.

The actual most important game of the week

It might be Iowa-Iowa State! Probably not in terms of the College Football Playoff, but quite possibly at the New Year’s Six level. Both teams project to finish in the top 20 or so. Each year only offers a few such meetings in non-conference games, so a nice boost awaits not just the team that best survives being the Iowa Hawkeyes in Ames, but also for the winning team’s conference. Yes, there’s a remote chance that Oklahoma or Ohio State or whoever will take the playoff’s No. 4 seed because of something that happened in El Assico.

Oregon-Ohio State must also be mentioned, though it’s likely we already know the outcome there. If Oregon wins, please look up what likely means before screenshotting this at me.