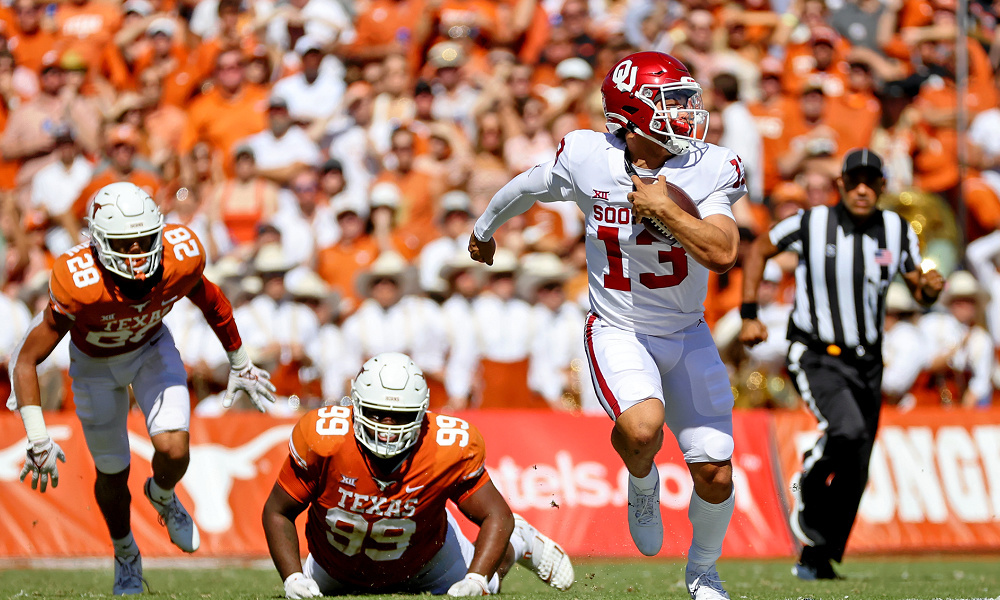 Quick reaction to the biggest games of Week 6: Oklahoma vs Texas, Ole Miss at Arkansas, Penn State at Iowa, Michigan at Nebraska, Alabama at Texas A&M

First, these two put on one of the best shows you’ll see all year.

Second, both teams proved they’re still good enough to be considered among the best in the country – even with the lack of defense on both sides.

Take a step back for a moment.

Remember, Arkansas was 3-7 last season and had just 11 wins over four years before 2021. Now it really is good enough to be considered just below the unrealistically elite of the SEC.

Remember, Ole Miss hasn’t had a winning season since 2015. Now it really is good enough to be considered just below the unrealistically elite of the SEC.

Both of them are now worthy of being considered among the top ten teams in the country, and it’s not just because they came up with a classic.

Yes, the Arkansas defense that locked down Texas is suspect, but the Ole Miss attack is just that good.

Yes, the improvement on the Ole Miss defense was a bit of a mirage, but KJ Jefferson today was just that good.

Jefferson – seriously, have you ever seen a quarterback with quieter feet? – proved he can take the passing game up a whole other level to go along with his rushing ability.

Matt Corral didn’t necessarily jump back into the Heisman race, but he hit his downfield throws with a fearless performance with clutch throw after clutch throw late.

It came down to the last second and the last throw in a game with close to 1,300 yards of total offense and with wild mood swings, and there’s more fun to come.

Arkansas will get its shot at Alabama. It still gets to play Auburn and LSU, too.

Ole Miss will get Auburn and Texas A&M and LSU and Mississippi State.

Good luck, everyone else. Have fun with these two.

This was fun. Now let’s do it again when it really matters on December 4th.

If these two really do get to the Big 12 Championship, it’s not going to be better than this. And if it is, let’s just stop playing college football, because there won’t be any point in trying to come up with something more amazing.

Obviously this totally sucks for Texas fans – but in a lot of ways, it shouldn’t.

Yes, they’ll have to deal with obnoxious people chirping and disrespecting the hand gesture – seriously Longhorn fans, you have GOT to stop being so easily trolled and triggered by that – but the offense really, really worked.

You’re getting to see just how amazing this attack can and will be in the Steve Sarkisian era, and if the early recruiting returns are any indication, it’ll soon go to a whole other level of awesome.

But this game will be more about the perseverance of an Oklahoma team that looked totally fried.

The Sooners did everything to give away the opener against Tulane, and it seemed to try to give away the Kansas State game. Down 28-7 in the first quarter, they appeared to be tapping out on the 2021 college football season – at least the idea of getting to the playoff.

And then came The Decision.

Spencer Rattler is a fine quarterback, but he was tentative and the offense wasn’t moving. Lincoln Riley put in Caleb Williams, and Oklahoma became Oklahoma again.

The freshman completed 16-of-25 passes for 212 yards and two touchdowns, he ran for 88 yards with the 66-yard score keeping the game alive, and he gave the team a confident swagger that was desperately missing with Rattler.

That’s been the issue. It’s not that the ground attack hasn’t been effective this year, but Kennedy Brooks averaged close to nine yards per carry with 217 yards and two scores, highlighted by the close-to-walk-off final touchdown.

And now it’s time to take Oklahoma seriously again. If it’s Williams going forward, and the offense can maintain the same spark to go along with a defense that’s going to be a whole lot better looking against every other offense, yeah, it’s time to talk College Football Playoff again.

At least it is until – hopefully – Texas gets another shot in a rematch.