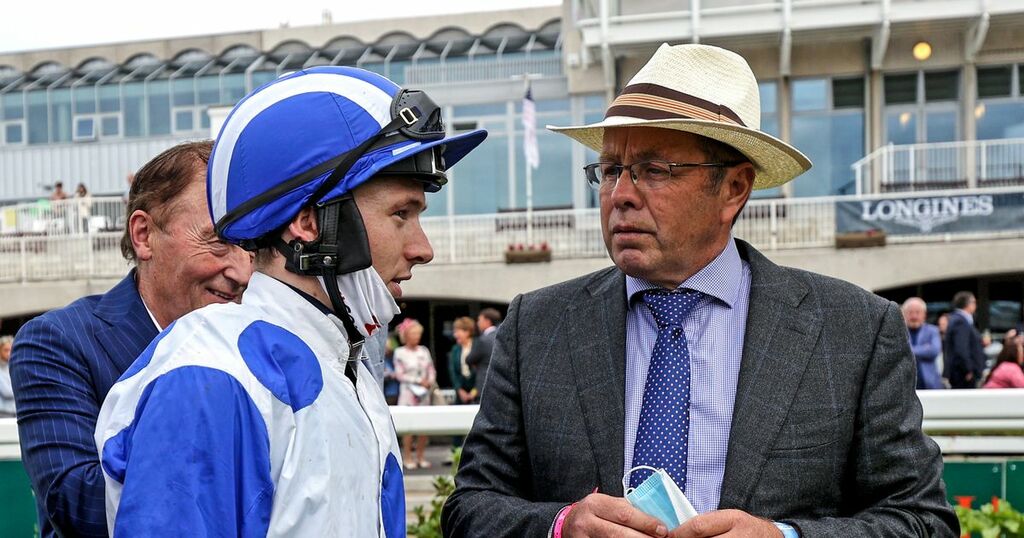 Atomic Jones came with a storming run down the outside to lift the Group Two KPMG Champions Juvenile Stakes and complete a quick 131/1 double for trainer Ger Lyons and jockey Colin Keane at Leopardstown.

Absent since making a winning debut at the Curragh 11 weeks ago, Atomic Jones (10-1) overpowered the opposition in the final half-furlong to give the Lyons team a fairytale start to Irish Champions Weekend.

There were plenty in with chances a furlong out – but it was the Wootton Bassett colt who came out on top by half a length in a bunch finish.

Stone Age was second with Absolute Ruler half a length away in third place.

“He’s done for the year I’d say, he’s a real horse for next year over a mile plus,” said Lyons, who is based in County Meath.

“He’s a big, huge baby and I didn’t even expect to be running him this year, never mind winning two.

“I think he’s typical of the sire, good, strong and dependable.

“We’d always start them at a mile (next year), but I’d say more than a mile will be his trip.”

Panama Red initiated the brace when stepping up from a maiden success to land the Listed honours in the Ballylinch Stud Irish EBF Ingabelle Stakes.

The Showcasing filly had got off the mark at the third attempt at Tipperary and had no trouble doing the business and springing a small surprise.

Corviglia led into the final furlong, but Keane delivered Panama Red (11-1) with a well-timed run to hit the front and stride away to score by half a length.

The well-backed 2-1 favourite Limiti Di Greccio stayed on well for second place with Corviglia a length and three-quarters away in third.

There was drama in the early stages when Shane Crosse was unseated after his mount Voice Of Angels clipped heels. He was able to walk away after the incident while the Joseph O’Brien-trained filly carried on riderless.

It was a triumphant return for Lyons, who was at the track for the first time since the Irish Guineas meeting in June last year.

“That’s brilliant. I had intended to come back today. I’ve been saying it all my career that you don’t need trainers at the racing, the staff do the job and they’ve proved it,” he said.

“We’re here today because it’s the biggest day on the Irish calendar. It’s very important to us and we’ve targeted the meeting.

“We’re lucky enough to have horses to target the meeting and we’re blessed to get a winner on the first start, which is fantastic. We’ll have plenty of runners, not as many tomorrow but plenty today. It’s a good start and hopefully there is more to come.”

He added of the winner: “In fairness today was her Derby, no disrespect to her but she’s a work in progress. We know she’s a miler for next year and we’ll probably put her away now and let her grow up.

“We’ll probably start her back in one of the trials, but I’ll have a word and see what Colin thinks.

“Colin gave her a great ride. That’s just him, we’re just riding the wave with him and we’re lucky to have him.”