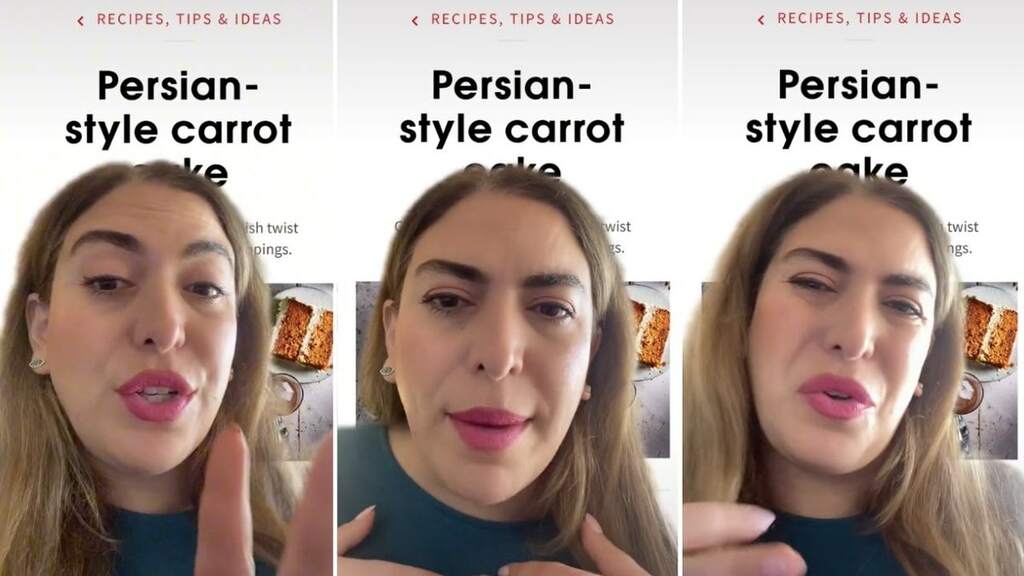 First, there were ‘Indian Style Triangles’. Now, behold the sequel to Coles’ culturally-challenged ‘ethnic’ foods: this time, the ‘Persian-style carrot cake’. And by Persian, Coles means they chucked in some rosewater and raisins. Classic.

TikTok user Loucineh Mardirossian (@loucineh) made a video making fun of a Coles recipe that claims to be a ‘Persian-style carrot cake’, and her (extremely polite) take-down of the recipe is honestly iconic.

Loucineh roasts Coles by pretending to be a Persian aunty and approaching the recipe like they would. And she doesn’t hold back.

“I didn’t know you can do it Persian style. I thought, ‘how do they do this? Do they bring the carrots from Iran?’,” she said before starting her take-down.

“So I look, and then I see, okay first thing, you put raisins in this cake? That’s not Persian style you know, because for us, um, raisins are a very… low class dried fruit. We like dried fruit, but not raisins, no. Very low class,” she said in the video.

People in the comments were losing it at the idea that raisins can be ‘low class’ – though Loucinah clarified in the comments that she meant to portray the raisins as being low on the order of dried fruits, below things like apricots, dates or plums. Not like, an actual commentary on class. Though honestly, the miscommunication is very on-brand for ethnic aunties so you can’t even be mad.

“Then, second thing, you’re putting rosewater… but why?,” she continued.

Honestly, the ‘why’ took me out. The simultaneously accusatory and confused tone? Incredible.

“You don’t put rosewater in everything, that’s like if I make rice, and then I put Vegemite on the rice, and I say ‘Oh look, this is rice Australian-style.’ No, don’t do that,” she said. And honestly, true!!!

Not everything with rosewater in it is Persian-style! Just like how not everything with tumeric in it is Indian-style! Or even soy sauce and several Asian foods, or coconut milk and Thai food – the reduction of an entire cuisine to one spice or flavour is so annoying and it happens all the time, especially with blogs and recipes online that are written by people not from those cultures. As a fellow ethnic gal, I really appreciate any conversation that brings that to light.

“Then last one, is you putting Turkish delight… on top?,” Loucinah continued.

“You know it says Turkish delight? Not Persian delight.

“Coles next time, please ask me, okay? Don’t do this.”

Yes Coles, please consult people from the cultures you base your dishes off! Be it ‘Indian-style triangle’ samosas or ‘Persian-style carrot cake’, let’s try not to reduce cultures and flavours to one, inaccurately named dish thanks.

The post Coles Added Rosewater To Carrot Cake And Called It ‘Persian’ But This TikToker Isn’t Having It appeared first on Pedestrian TV.