Wayne Rooney told the High Court that he had an “awkward” conversation with Jamie Vardy to get his wife to “calm down” her media activities during Euro 2016 at the request of the England manager.

The former England international said that then-England manager Roy Hogson and assistant manager Gary Neville asked him, as captain of the team, “to speak to my team mate Jamie Vardy about the fact that Becky’s media activities were causing problems and distractions” during the tournament.

“I think we all knew that it was an awkward subject,” Mr Rooney told the court. “So I agreed to speak to Mr Vardy...to ask him to ask his wife to calm down.”

Ms Vardy’s legal team has denied that this conversation ever took place and challenged Mr Rooney on this in court.

He responded: “I’m sat here under oath. I 100 per cent spoke to Mr Vardy about this situation.”

Ms Vardy is locked in a legal battle against Ms Rooney, who has accused Ms Vardy of leaking “false stories” about her private life to the press.

Here are the other key moments from day six of the libel trial:

Wayne Rooney said that Coleen has “become a different mother, a different wife” because of the stress of the libel trial.

Speaking about the case, he said: “I don’t think anyone wants to be in court, certainly me and my wife don’t want to be in this court.

“I’ve watched my wife over the last two, two and half years, really struggle with everything that’s gone on.”

“It’s been very traumatic,” he added.

‘My wife is an independent woman’

Wayne Rooney said that he “didn’t want to get involved” with his wife’s social media sting, saying she is “an independent woman who does her own thing”.

He said that in 2017 Ms Rooney spoke to him about leaks of her private information to The Sun. But he didn’t know anything else about it until 2019, he told the court.

“In 2019 again she said there were more stories or posts getting released to the Sun newspaper and she believed it was Rebekah Vardy,” he said.

Asked by Ms Vardy’s lawyer Mr Tomlinson whether he was surprised that his wife thought Ms Vardy was the source of the leaks, Mr Rooney said: “Was I surprised? No.”

“Again I didn’t want to get involved in it. I had my own work at the time I was still playing football and Coleen works independently herself and it’s not something we discussed again.”

Coleen Rooney’s fake Instagram stories, which she used to run her sting operation, were revealed at the High Court.

In two of the images, only one account is shown to have seen the stories - Rebekah Vardy’s account. The first two images are fake stories Ms Rooney posted as a trap for the person she believed was leaking her private information to The Sun.

The last Honda post is a story that was leaked to the tabloid paper. It was a true event but Ms Rooney’s team alleged that the way the story about it appeared in The Sun was incorrect. The Sun reported that Coleen Rooney had been in a car crash when she had in fact just scraped the side of the vehicle.

Wayne Rooney’s cousin Claire said she was referred to as “chavvy” in a WhatsApp message exchange between Rebekah Vardy and her agent.

In a witness statement, Claire Rooney said she was provided with an extract of messages between Ms Vardy and her agent, Caroline Watt.

The pair had been discussing who might be leaking stories about Mr Rooney’s wife Coleen to The Sun.

“I can see that Caroline Watt suggests ‘It’s probably someone like Wayne’s chavvy sister’”, Claire Rooney wrote in her statement.

“Wayne doesn’t have a sister and so I assume that Caroline Watt is referring to me as Wayne’s cousin and because I still have the Rooney surname.”

Penelope Adaarewa, a PR executive, was asked about a meeting she attended with a photographer called Danny Hayward, director of Splash News, and a mystery Mr Y - a figure in the media industry.

Danny Hayward has previously been named in the trial as someone who worked with Ms Vardy’s agent Caroline Watt.

During the meeting Ms Adaarewa overheard a phone call, which was on speaker phone, between Mr Y and Mr Hayward.

In her written witness statement, Ms Adaarewa said about Ms Vardy’s Instagram account: “I specifically recall Danny saying that others knew he had a means of access to the account and it seemed clear to me that included Becky Vardy.

“In his discussion with Y about the fallout from Mrs Rooney’s recent revelations, I recall he used the words to the effect of ‘But she is sticking to her story that she knew nothing about it’ which he said clearly believing that Ms Vardy did in fact know all about the passing on of information from her Instagram account and that her denial was disingenuous.”

During court proceedings, Ms Vardy was doodling in a notepad - including drawing a collection of mini desert islands and a large flower.

It was Mr Vardy’s first appearance at the libel trial.

‘I would suggest that this is a manual deletion’

Defence witness Mr Matthew Blackband queried Ms Vardy’s account that her computer crashed when she tried to upload her Whatsapp chats with her agent and that is why she lost key messages.

“Based on the information that has been provided I would suggest that this is a manual deletion,” he said.

Referring to the alleged computer crash, Mr Blackband told the court: “I cannot see how that would be an explanation [for the missing messages] as the download the data has already occurred, a zip file has been formed.”

“I’ve not been able to identify a process that would cause that to happen,” he said. 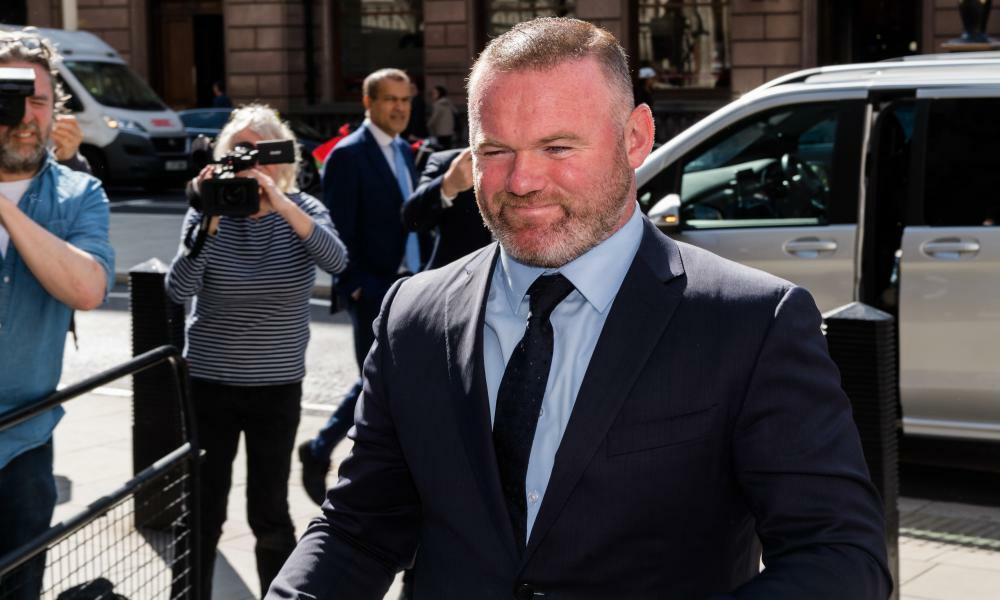 Wayne Rooney says he asked Jamie Vardy if his wife could ‘calm down’ during Euro 2016
Derby manager asked teammate whether Rebekah Vardy could cut back on media activities, ‘Wagatha Christie’ trial hears