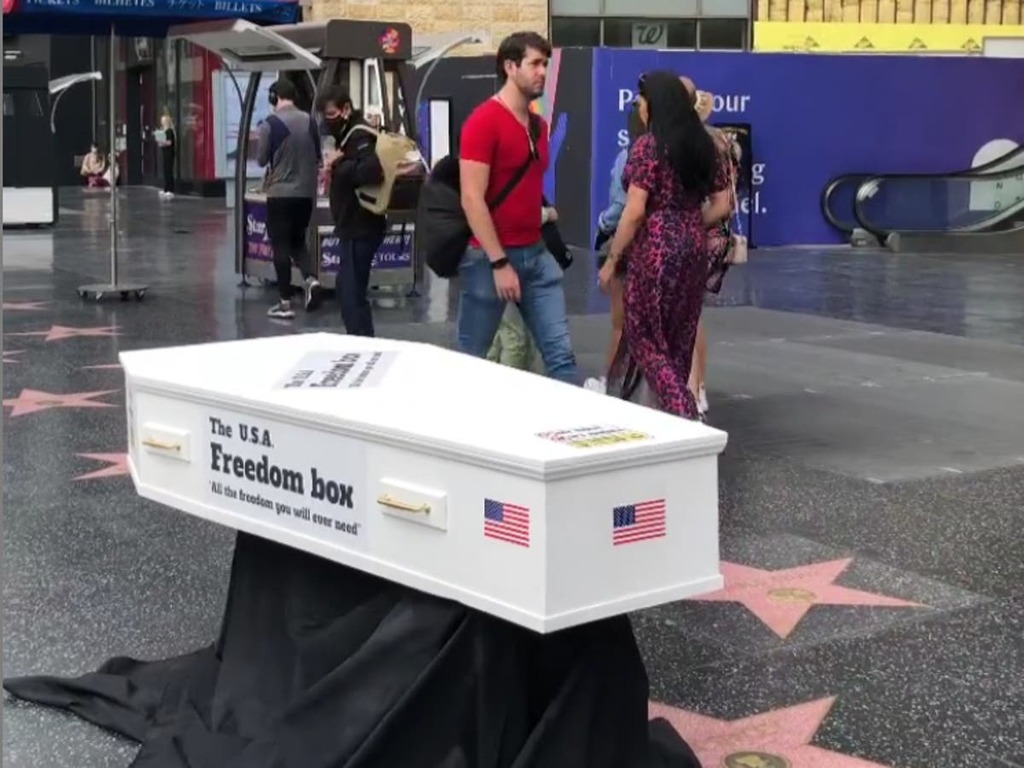 A coffin was installed on Donald Trump’s Hollywood star this week in protest at US Covid deaths and resistance to mask wearing and vaccines, according to an artist.

Plastic Jesus, who is based in Los Angeles, installed the large white object on Hollywood Boulevard on Thursday and shared images of the stunt on his Instagram.

He said in a video that the coffin, which features the words “USA Freedom Box” on one side, was “inspired by all the anti-mask, anti-vaxxers”, and the former US president.

It comes almost two months after Mr Trump was heckled by his supporters in Alabama for telling them to get vaccinated against Covid, which has claimed the lives of more than 700,000 Americans.

Mr Trump told the rally crowd: "You know what? I believe totally in your freedoms. I do. You've got to do what you have to do. But I recommend, take the vaccines. I did it. It’s good. Take the vaccines”.

Plastic Jesus, who is British, said his artwork was aimed at people who are “claiming that wearing a mask and taking a vaccine that can save your live is an infringement of your freedoms.”

“So what can be the biggest measure of freedom that you can get other than death?”

Mr Trump was heavily criticised for refusing to wear a mask in public last year and downplaying the severity of Covid for months. He also admitted to having taken a vaccine behind closed doors.

Plastic Jesus added in an interview on Twitter that it was "really kind of a blow at the people saying vaccines and masks are impeding their freedoms.”

"Once you're dead and you're in a coffin, you don't have any worries about losing freedoms."

It is not the first time the British-born artist has taken aim at Mr Trump, after he erected a “border” around his Hollywood star amid the 2016 campaign.