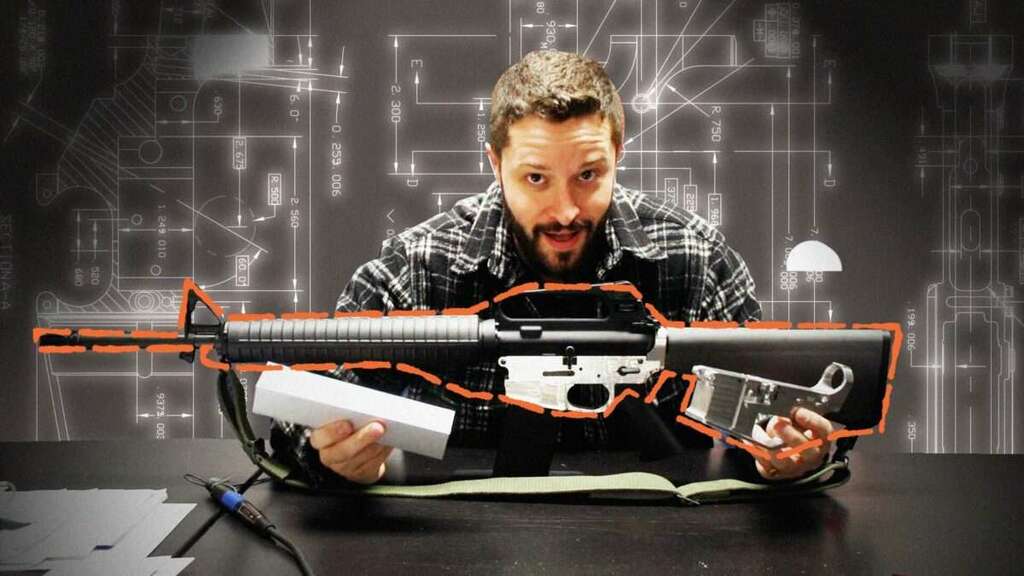 The Bureau of Alcohol, Tobacco, Firearms and Explosives (ATF) is expected to adopt a new rule in the coming weeks with the potential to undermine the DIY gun industry: It will require that the metal parts that hobbyists used to manufacture their so-called ghost guns be registered as legal firearms.

Cody Wilson, the founder of the Austin-based Defense Distributed and a prominent figure in the DIY gun movement, has been planning a countermove that he says will allow his customers to circumvent the new rule: The company has modified its* home milling machine so that users no longer need to load it with the partially fabricated metal parts subject to the new rule.

Instead, they'll be able start from scratch with a solid block of aluminum.

The newest version of the Ghost Gunner, a milling machine that's roughly the size of home printers, will now be able to "take raw materials…in their primordial state…and turn them into guns," Wilson tells Reason. Blocks of aluminum will not be subject to the new regulation.

It's not the first time the federal government has tried to undermine Wilson's business. In 2013, the State Department ordered him to take down plans posted to his website for his first 3D-printed gun, the Liberator. Wilson sued on First Amendment grounds, which led to a 2018 settlement with federal government, a media firestorm, and a 9th Circuit Court injunction against states trying to ban sharing of the files in 2021.

The new 100-page administrative rule issued by the ATF, which was published to the Federal Register in May 2021 for public review, will change the definition of a firearm to encompass "weapon parts kit[s]…designed to or [which] may readily be assembled, completed, converted, or restored."

If adopted, it will mean that the federal government will require gun part kits sold online to bear the same serial numbers as do fully manufactured firearms, which could put most companies in the space out of business because customers won't want to deal with the bureaucratic hurdles of registering their parts.

Wilson says that Defense Distributed is the only DIY gun company pivoting in the face of the upcoming rule, so its real impact will be to drive his competitors off the market. Biden is "giving us, the nation's premier ghost gun company, a monopoly of the market," Wilson says.

As justification for the forthcoming rule, the ATF cites an uptick in the number of homemade guns recovered at crime scenes, and the agency says it views unregistered firearms as a growing national security threat. After the Capitol riot, the Department of Homeland Security turned its focus to "homegrown domestic terrorism," which the White House calls "the most urgent terrorism threat the United States faces today."

Wilson says the new regulation will have the opposite effect because it will mean that more DIY gunsmiths are buying blocks of aluminum instead of gun kits—the sale of which can be more easily surveilled by law enforcement.

Some critics have accused Wilson of helping to arm far-right activists, claiming that Defense Distributed is a part of a larger project meant to funnel weapons to militia groups aligned with those involved in the Capitol riots. His latest video marking the new product launch makes visual reference to January 6.

Wilson says that Ghost Gunners are being used by many different types of political groups.

"Our perspective has always been global," he says. "And of course, there's no level of control that I can affect to make sure that only the right-wing gets access to this equipment."

When we saw news reports about the Capitol Hill Autonomous Zone, or CHAZ—the short-lived project started by far-left activists in Seattle—he says he noticed participants carrying homemade guns and wearing the "Come and Take It" patches made by Defense Distributed.

Wilson personally identifies with the "the post-political right" because they're "the only people actually attempting to… resist this accumulation of centralized power control," he tells Reason.

He elaborated on the concept of "post-political" in an April 2021 speech at the "Bear Arms 'n' Bitcoin" conference, in which he encouraged the audience to focus less on engaging in electoral politics or debate and persuasion and more on maintaining intellectual independence, political sovereignty, and creating things that constrain power in the real world.

"It's not just that [U.S. politics are] performative, but it's like, somehow cringeworthy and connected to a pseudo-reality that's further and further away from what's actually happening," he says.

Wilson notes that the ATF's latest move shows how disconnected the U.S. regulatory state is from reality.

"These people will high-five themselves, like, 'Well, we solved kit guns and gun crime in America, right?'"

A complete federal ban on DIY guns is a nonstarter in Congress, Wilsons says, but that's not the case at the state and local level. Defense Distributed is suing New Jersey's attorney general in a Texas court for his attempts to ban the distribution of gun files, and multiple cities in California have banned the sale and distribution of ghost guns. Democratic Governor Gavin Newsom has proposed a law modeled on Texas's new abortion law that would deputize private citizens to pursue lawsuits against individuals who distribute ghost gun kits.

But Wilson says that path is unlikely to ever be sufficient to halt the home production of firearms.

"There's a world of things that are not gun parts. We will give you the technology to turn these things into guns and gun parts," says Wilson.

Four years ago, Wilson's personal legal troubles caused him to temporarily step back from his role at Defense Distributed. In 2018, he was indicted for paying for sex with a 16-year-old girl he met through a dating site for adults, though his legal team at the time argued he wasn't aware that she was a minor who had lied about her age to sign up for the site. He ended up pleading guilty to a third-degree felony charge, was sentenced to seven years of probation, and had to register as a sex offender for that period.

"You can't choose your messenger," Wilson tells Reason. "I don't presume to be a spokesperson for everything happening in the movement, which I clearly fathered. At the same time, when [Defense Distributed has] a technical innovation, I'm gonna show the way. I'm not gonna wait for you to figure it out or to commercialize it."

A lesson that Wilson says he came away with from his prior fights with the federal government is that politicians and regulators care most about how they are perceived and that they will back down quietly—as long as those challenging their authority are careful not to publicly embarrass them too much.

The State Department agency previously responsible for regulating ghost gun files gave up its legal fights, which enabled Wilson to make the online library of gun files—DEFCAD—available once again. Regulation shifted to a division of the Department of Commerce, which allows DEFCAD to host, but not generate or sell, the files.

"They literally just wrote how we did DEFCAD into their regulations," says Wilson. "So, there's this process of accommodation. Power never admits that it loses, but it does have to tactically retreat."

"Power is essentially impotent in these places."

*CORRECTION: The original version of this article stated that the Ghost Gunner sells for $500. The deposit is $500, and the final sales price is $2,500 before shipping. The text has been updated to correct the error.