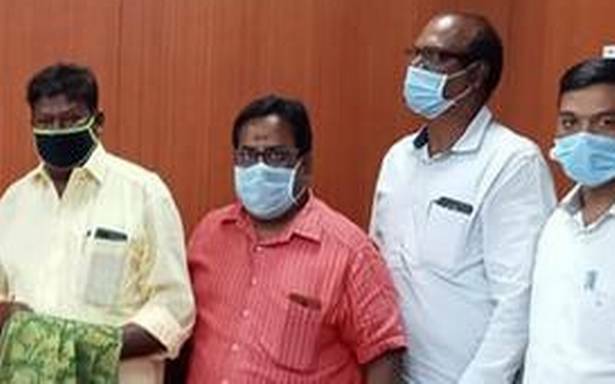 A government school near Udumalpet in Tiruppur district recently received a donation of ₹1 lakh from an unusual benefactor - a tender coconut vendor.

M. Thaiammal, who runs a tender coconut shop along with her husband Arumugam in Chinnaveerampatti village panchayat, donated the money to the Panchayat Union Middle School in the village. According to the school’s headmaster, N. Inbakkani, she visited the institution on January 8. “She had heard that we were looking for funds under the Namakku Naame scheme to construct a building for the school,” he said.

To his surprise, Ms. Thaiammal presented him a cheque for ₹1 lakh. Mr. Inbakkani conveyed this to the Chief Educational Officer of Tiruppur district, R. Ramesh, following which Collector S. Vineeth felicitated Ms. Thaiammal and her husband at the Collectorate on January 11.

“Around 650 students are studying at the government school, which has witnessed an increase in admissions in recent years. The school needs around ₹15 lakh for the construction of the new building with additional classrooms to accommodate the students, and its alumni have been donating regularly,” Mr. Inbakkani said. “The school was established in 1925. We are planning to get the new building by 2025, which marks its centenary year,” he said.

“I have been saving ₹2,500 per month in the hope of donating to a good cause,” Ms. Thaiammal told The Hindu. Having accumulated savings for over three years, she came to know that the Panchayat Union Middle School was looking for funds. As her husband, son and daughter had studied in this school, she said she wanted to do her bit to improve its facilities.