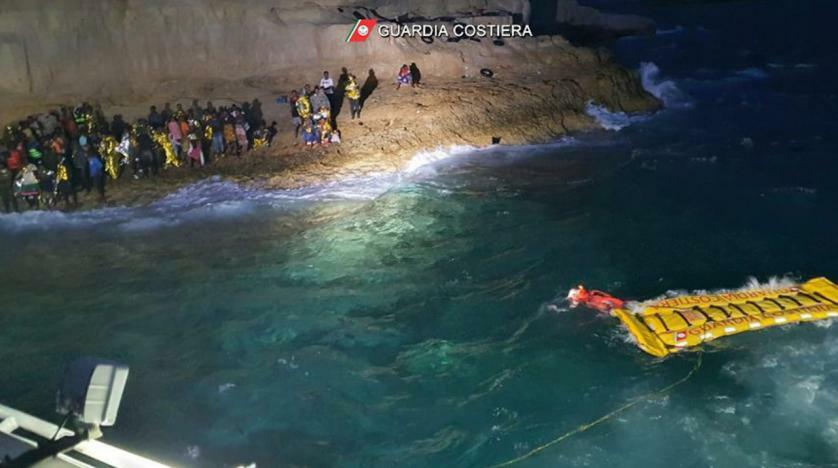 The Italian Coast Guard rescued 125 migrants who were spotted huddling together on the rocky shore of a tiny uninhabited isle at dawn Thursday, after one of their two boats partially sunk near Lampedusa island.

The migrants, who included 49 women and 20 minors, were “in a clear state of shock” when found on Isola dei Conigli, the coast guard said. The rocky islet is just across from one of Lampedusa's most popular beaches, which attracts vacationers enjoying its crystalline waters.

One of the two boats that the migrants had traveled on was found partially sunk, The Associated Press quoted the coast guard as saying.

Complicating the migrants' rescue were rough seas and jagged reefs. Special coast guard rescue swimmers jumped into the sea near where the migrants were gathered to bring them an inflatable yellow raft. A diver guided the raft to a pair of motorboats as the vessels' crew members yelled to the migrants to get aboard the raft in groups of three.

Eventually all 125 were hoisted safely aboard the rescue vessels, given protective wraps against the early morning chill and take to Lampedusa's port about four kilometers to the east. The coast guard said in a statement that all the migrants were in good health.

Lampedusa has a housing complex for migrants who reach the island after rescue from unseaworthy boats launched by smugglers based in Libya. Sometimes fishing boats or rubber dinghies crowded with migrants reach the island unaided after setting sail from Tunisia's coast.

Requests by many of the migrants for asylum are often denied by Italy unless they can document they are fleeing war and other conflict or persecution, not poverty. The migrants are hoping to reach relatives or obtain jobs in Europe.