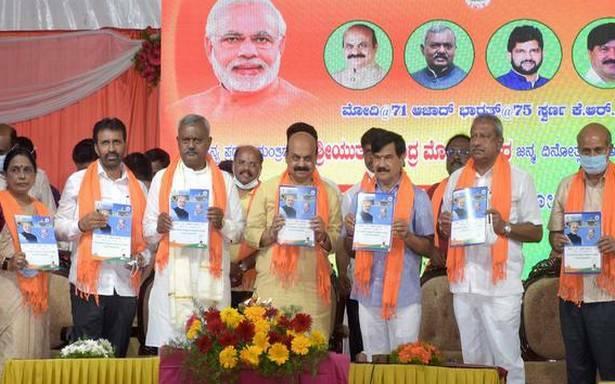 Chief Minister Basavaraj Bommai has made a slew of promises for the development of Mysuru including allocation for airport expansion and land acquisition, in the next budget.

He was speaking at a programme to mark the valedictory of Modi Yug Utsav organised by the Krishnaraja constituency MLA S.A. Ramdas here on Wednesday.

Mr. Bommai said that the government will also take measures to revitalise Lansdowne Building and the Devaraja Market.

The fate of the two heritage structures is hanging in balance with the heritage experts calling for their conservation and the councillors and elected representatives seeking their demolition and reconstruction.

The Chief Minister said the district in-charge Minister S.T. Somashekar and Mysuru MP Pratap Simha had apprised him of the imperatives of the Mysuru airport expansion and the need for additional funds for land acquisition. ‘’I will make suitable allocations for the works in the coming budget’’, said Mr. Bommai.

The expansion entails extending its runway from 1,740 metres to nearly 2,650 metres to enable operation of long-haul flights .

Mr. Bommai also hinted that the film city will also be established in Mysuru and listed a few initiatives taken by the government which will shore up the infrastructure of Mysuru in the days ahead. Work on the Haleunduwadi drinking water project has already been sanctioned at a cost of nearly ₹350 crore. Similarly, the State government had cleared ₹379 crore for a one-time development of a few MUDA layouts that lacked infrastructure.

The pandemic has affected resources and economic activity but the government has reset its priorities and was mobilising funds and the State was on the path of economic recovery, Mr. Bommai added. He said the government had also improved infrastructure in 75 urban local bodies in the State under the Amrith Nirmala Nagara programme.

The Chief Minister appreciated Mr. Ramdas for his initiatives to implement both the Central and State schemes which, he said, had benefited about 71,000 people in the constituency. ‘’I will write to the deputy commissioners of all the district to emulate the same model and implement the projects so as to benefit the public’’, he added.

Apart from Mr. Somashekar and Mr. Ramdas, L.Nagendra, MLA, Sunanda Palanethra, Mayor, and others were present.