Clive Palmer is preferencing the Morrison government in key seats. Does it matter?

That great chaos agent of Australian politics Clive Palmer could give this federal election one final twist.

As we wrote last week, the billionaire mining magnate whose United Australia Party is outspending all its rivals is so far yet to turn his advertising blowtorch on Labor as he did in 2019. But after months of urging voters to put both major parties last, and arguing that Australians can’t trust Labor or the Liberals, the UAP is preferencing the Coalition on its how-to-vote cards in some key marginal electorates.

UAP how-to-votes recommend preferencing Liberal candidates ahead of Labor in Bass, Chisholm and Reid — three of the government’s five most marginal seats.

Meanwhile, Palmer claimed the party was preferencing Labor in 45% of electorates and the Coalition in 55%. Although Liberals Dave Sharma (Wentworth) and Jason Falinski (Mackellar) are ahead of their independent challengers, Trent Zimmerman has been put last in North Sydney.

In Queensland, UAP how-to-votes are pushing Labor in Dickson (held by Defence Minister Peter Dutton), Griffith (held narrowly by Labor’s Terri Butler), and the safe seats of McPherson and Groom. In Western Australia, all incumbents are being preferenced last.

But in key Labor targets of Longman and Flynn, the Liberals are ahead of Labor. That’s also the case in Labor-held marginals the Coalition is trying to win, including Parramatta, Dobell, Macquarie, Hunter and Gilmore.

Strategists and pollsters predict a rump of disgruntled voters will turn to Palmer, particularly after years of tough pandemic restrictions and a growing indifference towards the major parties, so those preferences could be a big boost for the Liberals (the UAP and the Liberal Party have denied making a deal).

But that all depends on UAP voters actually following the how-to-vote cards. And that’s a big if.

In general, voters don’t follow how-to-vote cards nearly as much as assumed. Those who do have been steadily falling and in 2019 fewer than 30% of voters said they followed the cards, according to the Australian Election Study. That’s particularly true of UAP voters.

There’s a widespread belief in Labor circles that Palmer contributed to Bill Shorten’s devastating loss in 2019. But while the UAP’s negative advertising probably helped depress Labor’s primary vote, it was only in one seat — Bass — where its preferences helped get the Coalition over the line.

This election, the UAP vote is likely to be diverse and unpredictable, drawn to the party through grievances about lockdowns, pandemic restrictions and vaccine mandates. In particular it could do well in the outer suburbs of Melbourne angered by the Andrews government’s handling of the pandemic.

All that makes it a bit harder to get a sense of just how religiously those voters follow the how-to-vote cards. And just like the people who vote for his party, Palmer is unpredictable.

Over recent months, the UAP has shifted its messaging. After a focus on vaccines, mandates and lockdowns, Palmer’s advertising talks about “freedom” in more vague terms, while homing in on cost of living and access to housing.

But it’s still the memory of COVID restrictions that animates his key supporters.

“Everywhere we’re campaigning, at train stations and shopping centres, everyone is talking about freedom. This is the major issue,” UAP candidate for Reid Jamal Daoud said.

When asked why the party was preferencing the Liberals, Daoud said it was trying to win the seat, asserting that there was no difference between the major parties.

“They’re different sides of the same coin. Both of them participated in taking away our freedom, violating our medical rights and locking down the country,” he said.

This points to a reason why Palmer, despite giving muted support to the Liberals, is largely sticking with the script of attacking both major parties.

The pandemic has brought him a newfound suburban base, whose anger at COVID restrictions has coalesced into a rage directed at both major parties. Many aren’t happy about any inkling of support for Labor or the Liberals.

If Palmer goes in too hard for the government, he could alienate his fickle new mob of angry voters just in time for polling day. 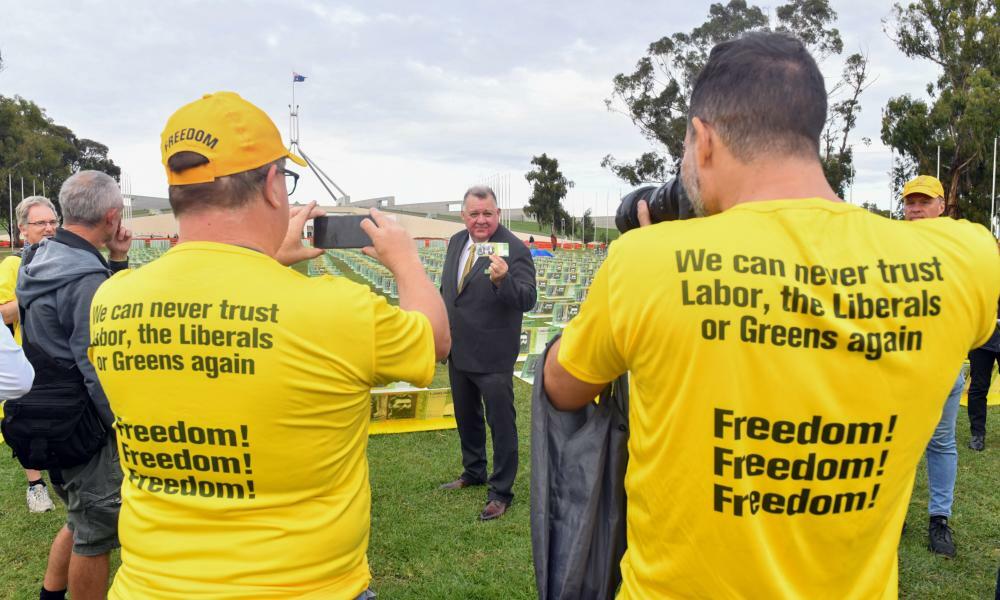 The Guardian - AU
One subscription that gives you access to news from hundreds of sites
If the last campaign targeted the quiet Australians, this time Morrison is appealing to the anxious ones

The PM, by focusing on transgender children, wants to style himself as the champion of worried parents – particularly those…