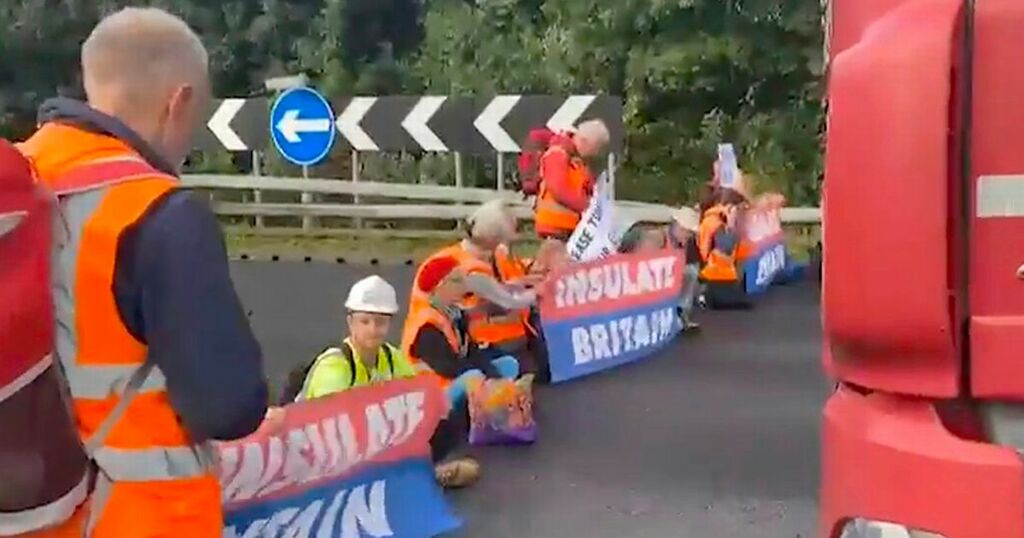 Eco-warriors have once again sparked traffic chaos on the M25 for the second time this week after blockading Britain's busiest motorway during rush-hour.

Activists from the 'Insulate Britain' group clogged up traffic Junction 23 at South Mimms in their latest protest, with 18 taking to sitting the road in the stunt.

It wrote on Twitter : "InsulateBritain are back. @BorisJohnson can you hear us yet?"

In another tweet they said: "You're angry. So are we. You're afraid for your job. So are we. You feel powerless. So did we. But sitting in the road makes @BorisJohnson sit up & take notice So we're staying, until @10DowningStreet #getonwiththejob".

Were you caught up in the protests? Email us at webnews@mirror.co.uk

Another part of the group have shut down the main carriageway of the M25 anti-clockwise in Surrey between junction 9 at Leatherhead and junction 8 at Reigate this morning.

The protesters held up signs which said "sorry for the disruption" as furious drivers shouted at them as they got stuck in the queue.

Police are understood to have been called to the scenes of the protest shortly after 8am.

It comes after the group staged a series of co-ordinated protests on Monday, causing massive delays.

Organisers Insulate Britain say the group staged coordinated protests against what they say is the Government's failure to insulate homes to reduce carbon emissions and fight climate change.

Around 20 protesters sat in the middle of the road in Kings Langley and caused tailbacks up to the motorway as violence reportedly took place.

One driver tried dragging a protester from the road so they could continue their journey, video from the scene posted by LBC shows.

Essex and Surrey Police said they arrested a number of people in relation to the protests.

A spokesman for Surrey Police tweeted: "A number of people have been arrested following protests at J6 +14 M25 8am today. Protesters from Insulate Britain part of a coordinated protest also affected other m/way junctions. Diversions set up+working hard to reopen m/way but please plan journeys accordingly this morning."

Essex Police said they have arrested 11 people in total.

A spokesman for the force said: "We received a call shortly before 8.15am today (Monday 13 September) reporting a number of people were blocking the road near to Junction 31 for Lakeside.

Officers attended and worked to resolve the situation quickly and safely and this included shutting the road. Eleven people were subsequently arrested on suspicion of highways obstruction and they are currently in custody.

Chief Inspector Paul Austin said: "This incident caused significant disruption and our officers worked to resolve it as quickly and safely as possible. I want to thank the drivers affected for their patience and understanding."

Spokesman for Insulate Britain, Nathaniel Squire, 25, said: "Insulating Britain's homes is a simple step to take to de-carbonise Britain. Not only is it a necessary step towards achieving the government's net zero targets but it also helps millions of vulnerable people in Britain.

"Working as a healthcare professional I know that many who struggle due to fuel poverty will only increase as the planet continues to warm unless we do something now. The Insulate Britain campaign is holding the government to account regarding their net zero targets."

One supporter, Liam Norton, a 36-year-old electrician from London, said he is “shocked at the lack of significant action from our Government”.

He went on: “It’s a no brainer. Insulating Britain will reduce emissions, provide hundreds of thousands of jobs and stop our elderly dying in cold homes each winter. So stop messing about, Boris, and get on with the job.

“As soon as a statement is made that we can trust and is meaningful, we will get off the roads.”