Sydney (AFP) - In a land struck by ferocious bushfires and floods, Australian voters frustrated by climate inaction are flocking to a band of right-leaning green-minded independents, threatening to flip a string of conservative strongholds from blue to "teal".

More than 20 candidates -- highly qualified, well financed and mostly women -- are barnstorming some of Australia's wealthiest suburbs ahead of Saturday's election, aiming to snatch parliamentary seats held by ruling conservatives for generations.

Polls indicate these "teal" independents -- somewhere between conservative blue and environmental green on the political spectrum -- could not just win seats, but hold the balance of power in a hung parliament.

Among the districts up for grabs are those previously held by four conservative Liberal Party prime ministers and the district of current Treasurer Josh Frydenberg, who is seen as a possible future party leader and prime minister.

More than 17 million voters are registered for the May 21 polls, which will choose all 151 seats in the lower chamber and 40 of the 76 seats in the Senate.

The independents are sticking a dagger into the conservatives' exposed flank on the climate and other major concerns such as corruption and the treatment of women in government.

But Morrison's Liberal-National coalition backs coal mining and burning into the distant future, and has resisted calls to cut carbon emissions from 2005 levels faster than its current commitment of up to 28 percent by 2030.

The government has also failed to deliver a promised federal anti-corruption watchdog.

Analysts say the climate is a national concern but is more likely to sway votes in leafy suburban seats where people feel no threat from a cut to mining jobs.

Some conservative voters feel they have been "left in the wilderness" by the Liberal Party's drift to the right, said Zoe Daniel, a former ABC journalist turned independent who is now a front-runner in the polls in the wealthy Melbourne seat of Goldstein.

A YouGov poll published May 11 put Daniel slightly ahead of the incumbent Liberal Party member for Goldstein, Tim Wilson.

The "umbrella issue" for voters is integrity, Daniel told AFP, not just the need for a federal anti-corruption watchdog but also transparency in spending taxpayers' money and political donations.

That spills over into other issues such as the climate, said Daniel, who supports a 60-percent cut in carbon emissions by 2030, far more than the government or opposition Labor Party.

"I think the penny has started to drop for people that there are powerful influences in the background and that's why our climate policy looks the way it does," she said.

Labor, which relies on support from unions including those representing mine workers, has proposed a 43-percent cut in carbon pollution by 2030.

Spender, like Ryan and Daniel, is among 22 independents who have secured campaign financing from Climate 200, a fund set up by activist-philanthropist Simon Holmes a Court.

In the case of a hung parliament, just a few independents could wield some influence on national policy.

Independent candidates have already helped to elevate issues such as the climate and integrity, said Daniel.

"Independents have changed the national conversation because they are able to raise hard issues that won't necessarily be popular." 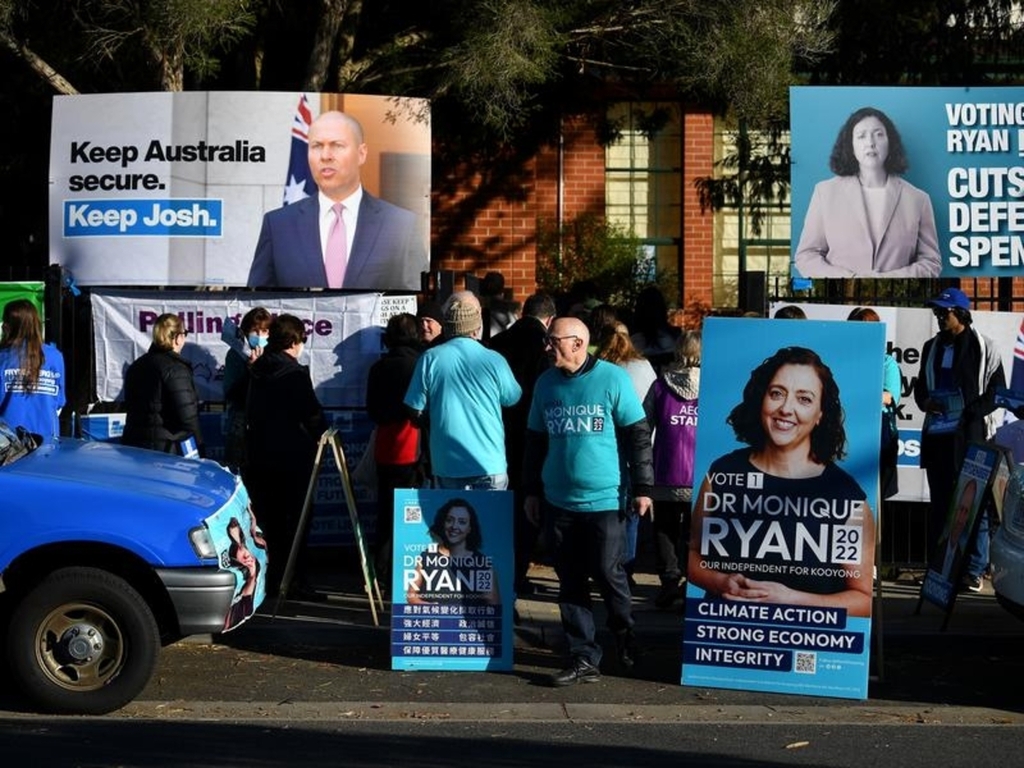 AAP
From analysis to the latest developments in health, read the most diverse news in one place.
Australian conservative party faces teal independent threat

The Independent UK
Morrison’s whistle-stops span the nation, but five MPs were left to fight their own battles