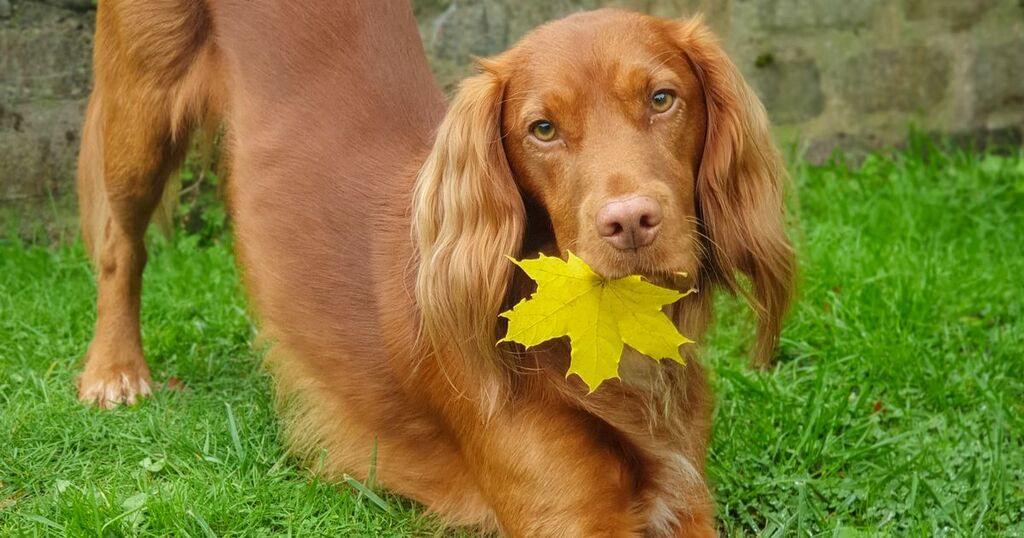 A cocker spaniel is so clever that he's mastered playing the xylophone and complex brain training games - even learning some tricks so quickly his owner has to film them in slow motion to work out how he does it.

Impressive footage shows Emily Anderson's pet pooch Leo stacking a tower of rings using just his mouth in 10 seconds before completing a maze by pushing a bead with his nose.

Dog trainer Emily, 30, then says 'music' prompting the two-year-old to pick up a mini mallet and drag it across a toy xylophone on the same table.

Leo also knows how to inflate rubber rings using a combination of his mouth and nose before stacking them on top of each other in order.

Emily, from Aberdeen, said: "Every day he totally amazes me. He's a real dog in a million, I'll never have another Leo.

"The things he does constantly surprise me because I don't think they're possible and he masters them in 20 minutes.

"I've been training him ever since I brought him home at eight weeks. I already had his half-sister Phoebe so I actually met him when he was three days old.

"The majority of the toys he has are children's toys. I'm always on the lookout for something new for him to learn. Baby toys work well for him.

"With the bead maze I had spotted it in a doctor's reception and thought 'Leo could do that with his nose'.

"I was searching for a present for my friend's child one day and then stumbled across the activity table in an Argos catalogue.

"I thought the sticks were solid but it turned out they wobbled so I didn't think he'd manage to do it. Lo and behold he had mastered it in 20 minutes.

"I had to film it in slow motion so I could understand how he'd done it. He holds the object in his lower jaw and then manoeuvres it with his tongue."

Emily ramped up Leo's training after he almost died in March 2020 when he contracted a parasite called giardia.

Emily said: "I thought he was just sleeping under my desk one afternoon at work but when it came for me to leave, he just didn't stand up.

"Leo had gone into shock so I rushed him into the emergency vet. They thought it was Lyme disease initially but a few days later it came back as giardia.

"It shouldn't make dogs that ill but Leo had taken it badly and it sent him into shock. It was a horrible few days.

"Incredibly he recovered physically after only a few days but it really affected him mentally and made him very anxious.

"We started to get back to normal and then we went into lockdown. So from nowhere we were at home all of the time and he was just really sad.

"He wasn't like the happy dog he was before and I knew I had to do something to help him out of his slump.

"I knew he'd always enjoyed his training so I decided to focus on doing a bit more of that with him and that's how the tricks started.

"The first thing we did was roll a blanket and then stack the rings and it just snowballed from there."

Emily teaches Leo a new trick every week and builds them up methodically by making them slightly more difficult.

Emily said: "For stacking the rings I started by teaching him to hold objects in his mouth, then dropping them into a washing basket.

"Gradually his target became smaller and eventually I got him to drop the rings onto the stack while I was holding it. It took about a month in total from start to end.

"Some of them are using similar skills but using them on different objects. Leo is so incredibly happy when he's training.

"He'll fall asleep watching TV afterwards but ends up waking himself up by wagging his tail so much.

"Phoebe will do tricks for treats but she isn't as keen to do the brain games as much, she prefers weaving through targets."