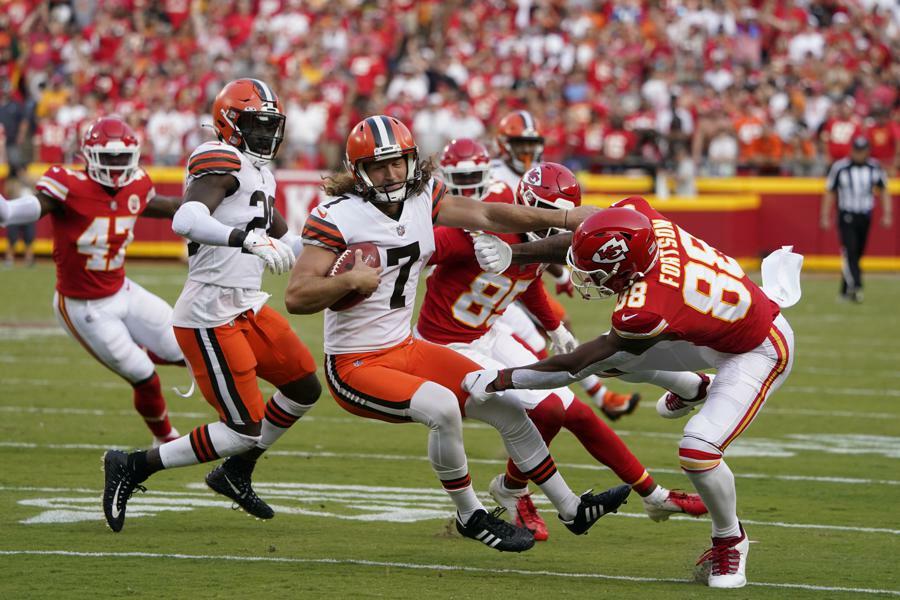 In their last 17 games that counted, the Cleveland Browns are 0-2 vs. the Kansas City Chiefs and 12-5 against everyone else.

Fortunately for the Browns, all of their 16 remaining regular season games are against everyone else. Because the Browns are still working on what has become The Kansas City Problem.

In their last two games that counted, both of them at Arrowhead Stadium in you-know-where, the Browns have been beaten twice by the Patrick Mahomes Flying Circus and Gunslinging Thrill Show – by a combined margin of nine points: 55-46.

Cleveland lost 22-17 in last year’s Division playoff game, and 33-29 on Sunday, in Week 1 of this NFL season. Blowout losses can be tossed in the trash bin as file-and-forget debacles.

However, losing by five points last year and four points on Sunday are not so easily forgotten. But they are, in the words of Browns coach Kevin Stefanski, easily explained.

Cleveland was minus-two in the turnovers competition, and it was two of their biggest stars who coughed up the ball: an interception thrown by quarterback Baker Mayfield and a fumble by running back Nick Chubb.

“Minus two in turnovers, you’re not going to win a close game when you do that,” said Stefanski. In the 2020 season the Browns ranked ninth in the league with a plus-six turnover margin.

“We ran the ball very efficiently,” said Browns center J.C. Tretter. “We have to learn how to finish. We have to close out the game. We have to do the little things when the pressure is at its highest and the crowd is at its loudest. Everyone has to be dialed in.”

The loss, particularly after an impressive performance in the first half, was a splash of cold water to the face of a Browns team that has been serenaded through the pre-season with praise about the quality and quantity of their roster.

The 22-10 halftime advantage over the Chiefs only amplified expectations. But then in the second half Mahomes did his Mahomes thing, the Browns committed two turnovers, and what could have been a resounding season-opening win, became a demoralizing defeat for a team that since re-entering the NFL in 1999 has a combined record of 1-21-1 in season-opening games.

Their next chance comes Sunday, at home against the Houston Texans. The Browns may or may not have Odell Beckham Jr., one of their most electrifying playmakers, in the lineup for that game. Beckham, is still recovering from ACL surgery last November, and Stefanski was vague when asked about the possibility of Beckham being in the lineup against Houston.

With or without Beckham, the Browns must learn how to finish games, especially against elite teams.

“To finish games a lot of little things add up to big things. Alignment, assignment and technique,” Stefanski said. “You’ve got to play clean football for 60 minutes.” The Browns fell a few minutes short against Mahomes and the Chiefs, who are starting to look like John Elway and the Broncos in the pantheon of unsolvable nightmarish Browns opponents.

“We’re oh-and-one,” Tretter said. “We have to get to 10 or 11 wins to get into the playoffs. We have to start winning games to get back on track.”

Assuming they do, they will also have to eventually figure out an answer to their Kansas City Problem.