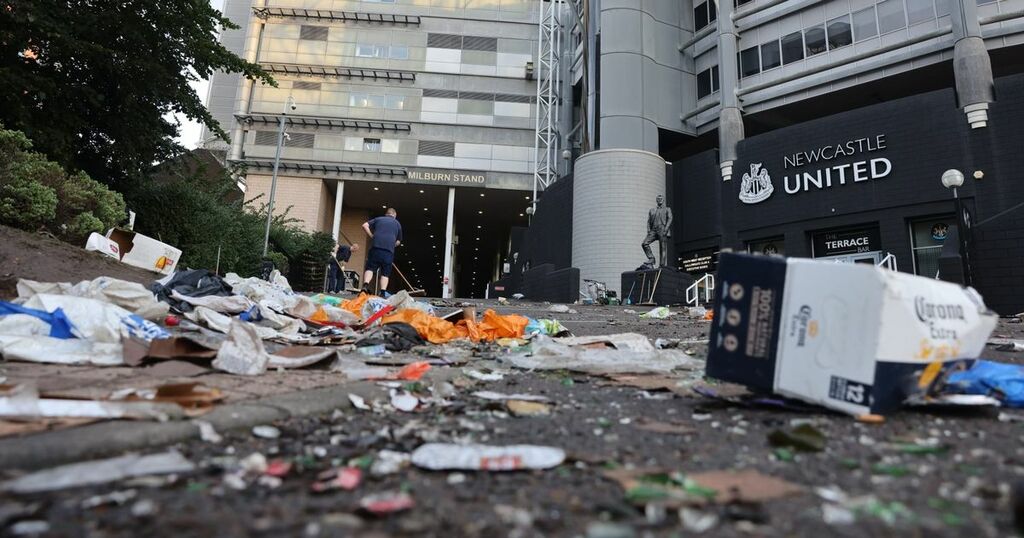 A clean up operation has begun this morning after thousands of fans celebrated the long-awaited takeover of Newcastle United.

There was a sea of black and white outside St James' Park on Thursday as thousands of fans spent the evening revelling in the official confirmation that Mike Ashley’s ill-fated reign on Tyneside is over.

Wild celebrations broke out as Amanda Staveley and her Saudi-backed consortium finally completed the takeover which has instilled new hope among the Toon Army.

Huge flags were on display as jubilant fans lined the stairs and walkways of St James' Park - many wearing replica shirts and fancy dress.

Iconic songs such as Local Hero and Blaydon Races echoed across the city to mark a new era for the club on an historic night.

And this morning, after the joyous celebrations, efforts to clean up were in full swing.

The area outside St James' Park was strewn with empty cans, bottles, food cartons, flares and other rubbish from the mass celebrations.

Some fans took to social media to express their dismay at the mess left behind.

One said: "St James' Park is an absolute state. Everyone who went there and left rubbish and smashed bottles are a disgrace to this club. You've let us down when the eyes of the world are firmly on us."

Another added: "Absolutely disgusting mess left by some of those at St James’ Park last night.

"Celebrating having our club back, then leaving this mess on our own doorstep. Have some respect and go back this morning to help clean it up."

A third said: "Just went past St. James' Park and it's absolutely bouncing. Bit of a shame about all the rubbish mind."

But by Friday morning, teams of cleaners had already been deployed to clear up the litter, with fans also going along to help out with the efforts.

Magpies supporters could not hide their excitement with some claiming it was the best day of their lives.

Speaking of the atmosphere around St James Park, Lewis Ridley said: "This is a proper club - you wouldn't see this anywhere else. This is the best day for the club."

On hearing the news Tommy Robinson said he cried his eyes out, adding: "We just want someone to take the club forward. I've never cried that much since my dad died."

For the latest NUFC news direct to your inbox every day, go here to sign up to our free newsletter