Clay idols being lined up for Vinayaka Chavithi 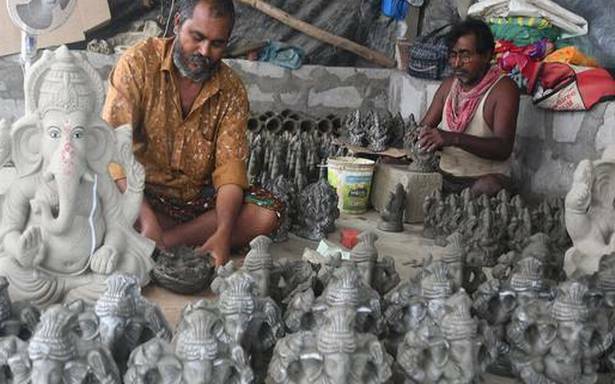 With just a couple of days left for Vinayaka Chaviti, artisans are busy giving final touches to the idols of Lord Ganesh. A variety of idols have been lined up at Kondapalli, Gollapudi Centre and near Siddhartha College in the city.

Clay idols of various sizes and shapes greet visitors at a workshop at Kummari Bazaar in Kondapalli.

Sunkara Srinivas, who has been making the idols for the last 10 years, explained that the first step in the idol-making process is to source different kinds of material — clay and mud —from Kolkata, in January.

“Five truckloads of soil from the Ganga was sourced from Kolkata. Actual work began in February. Idols of different shapes and sizes were made. Depending on the shape and size, the price of each idol costs anywhere between ₹600 to ₹2,000. The idols mostly are of clay colour. Some people feel the idols look dull and ask us to add colour. We explain to them that these are eco-friendly. If they persist, we use sketch pens to put a ‘tilak’ or ‘namam’ on the forehead,” he said.

Mr. Srinivas added that ₹7.5 lakh was spent on sourcing the clay alone. “The artisans are paid per piece. Thirty artisans were hired from Kolkata, and a total amount of ₹25 lakh was paid to them. Twenty local artisans were also involved in the making of idols. The Kolkata clay from the Ganga is considered pure and virtuous so the artisans use only that to create the idols. It also gives a smooth finish unlike the rough mud which leads to cracks on the idol,” Mr. Srinivas said.

The whole process took around five months, he said.

Mr. Srinivas said that 50,000 idols were exported to Hyderabad in Telangana State. Around 20,000 idols were kept ready for sale in Andhra Pradesh. Of this, 2,000 idols were two to four feet. “Initially, I had planned to make six-feet idols of Lord Ganesh also but for the government restrictions on pandals. Now, idols with a height of six inches to four feet are made available," he said.