La Paz (AFP) - Bolivia's interim president Jeanine Anez moved Wednesday to fill the power vacuum left by the resignation of Evo Morales, who said he was ready to return from exile in Mexico to "pacify" the country, as riot police clashed with his supporters and one was killed.

Anez, a 52-year-old deputy senate speaker before proclaiming herself acting president on Tuesday -- a move endorsed by the Constitutional Court -- named 11 cabinet ministers and appointed a new military high command.

In a press conference at the presidential palace, she reiterated a pledge to "hold elections in the shortest possible time."

Anez named former diplomat Karen Longari as foreign minister, and a right-wing senator, Arturo Murillo, as minister for the interior.

Her economy minister Jose Luis Parada worked for the local government in the wealthy eastern province of Santa Cruz, an opposition bastion.

Rejecting Morales' claims that her presidency amounted to a coup, she said: "There is no coup in Bolivia.There is a constitutional replacement."

"The only coup d'Etat in this country has been by Evo Morales," she said, referring to a 2016 referendum that blocked the ex-president from running for re-election, but which Morales had overturned by the Constitutional Court.

Riot police fired tear gas during clashes with hundreds of Morales' supporters who marched towards the presidential palace to protest Anez's appointment.

A 20-year-old man was shot and killed in a village near the eastern city of Santa Cruz during a clash between Morales supporters and police, a doctor said.

Bolivia has been in political turmoil since a controversial October 20 election in which Morales was awarded a fourth term as president.

Ten people have now died and more than 400 have been injured in the protests, according to prosecutors.A previous toll put the number of deaths at eight.

On Wednesday, demonstrations took place in Morales strongholds of El Alto, around 20 kilometers (nine miles) from La Paz, and El Chapare, a coca-growing region in the center of the country.

The La Paz clashes took place three blocks from the presidential palace, where Anez was presiding over the appointments of the new military top brass.

Anez praised the "democratic disposition of the Armed Forces and police" who abandoned Morales last weekend, prompting him to resign on Sunday after weeks of protests.

Police units in various parts of the country had rebelled on Friday, siding with opposition supporters.

On Wednesday, troops tried to remove barricades on the main highway linking two of the country's biggest cities, Santa Cruz and Cochabamba, amid efforts to resume business as usual after three weeks of protests and strikes brought much of the country to a halt.

Public transport services in La Paz were returning to normal on Wednesday, and bank and businesses reopening.

"We are doing everything possible to bring everything back to normal," said police chief, General Yuri Calderon.He said dozens of small police stations had been ransacked and burned by pro-Morales supporters in the wake of the ex-president's resignation.

"If the people ask me, we are ready to return to pacify" Bolivia, Morales told a news conference in Mexico City, where he arrived Tuesday after receiving political asylum.

Morales, who became the country's first indigenous president in 2006 and ruled for nearly 14 years, resigned Sunday and fled Bolivia after losing the support of the army and police.

He called for a "national dialogue" to resolve the crisis, and rejected Anez's legitimacy.

Speaking in his first news conference from exile, he said his stay in Mexico City would be temporary.

He later condemned US President Donald Trump on Twitter for "recognizing the de facto (Anez) government," though the United States did not formally do so until later Wednesday night.

Morales called the "coup" against him "a political and economic conspiracy coming from the United States."

Anez was recognized as president by the Constitution Court on the grounds that it was necessitated by the resignations of those above her in the government hierarchy.

As well as Morales, Bolivia's vice-president, Senate president and speaker of the lower house of Congress had also resigned, leaving Anez as the most senior figure still in office.

Anez, previously the Senate vice-president, tried to gain support for her appointment but failed to reach a quorum as senators from Morales's Movement for Socialism (MAS) boycotted Tuesday's session.

Many senators stayed away amid blockades and continuing protests by Morales supporters.

In a barrage of tweets from Mexico, Morales called Anez "a coup-mongering right-wing senator" who had "declared herself...interim president without a legislative quorum, surrounded by a group of accomplices."

He had initially tried to hold onto power and called new elections following the OAS audit but that failed to quash the protests against his rule. 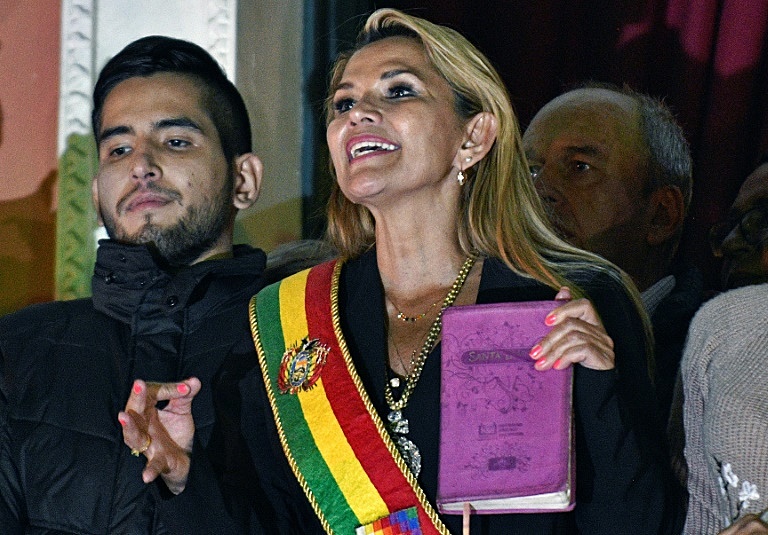 AFP
From analysis to the latest developments in health, read the most diverse news in one place.
Morales begins Mexico exile as Bolivia moves to end vacuum

Senator Jeanine Anez's assumption of presidential power met with violent protests by supporters of Morales, who resigned from office on…

The Guardian - US
One place to find news on any topic, from hundreds of sites.
Bolivia president's initial indigenous-free cabinet heightens polarization