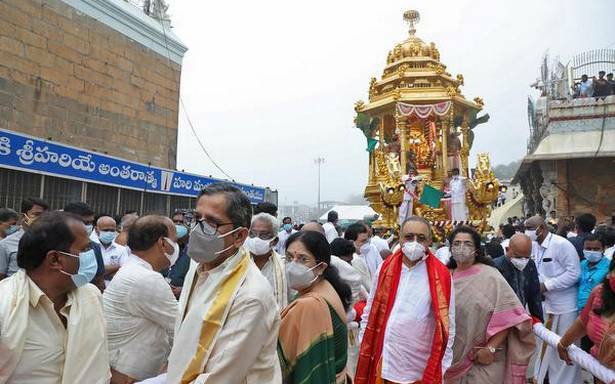 Chief Justice of the Supreme Court of India, Justice N.V. Ramana, walked through the ‘Vaikunta Dwaram’ and offered prayers at the famed Sri Venkateswara temple atop Tirumala hills here on Thursday, on the auspicious occasion of ‘Vaikunta Ekadasi’.

On his arrival, Chief Justice Ramana was formally received by TTD executive officer K.S. Jawahar Reddy and additional executive officer A.V. Dharma Reddy, while the trust board Chairman Y.V. Subba Reddy accompanied him inside the temple.

Priests showered ‘Vedasirvachanams’ (Vedic blessings) on the entourage and the TTD officials presented to the CJI ‘Theertha Prasadam’ and the 2022 calendar and diary brought out by the Devasthanams.