Civvy Street success for squaddie who moved into the removals game 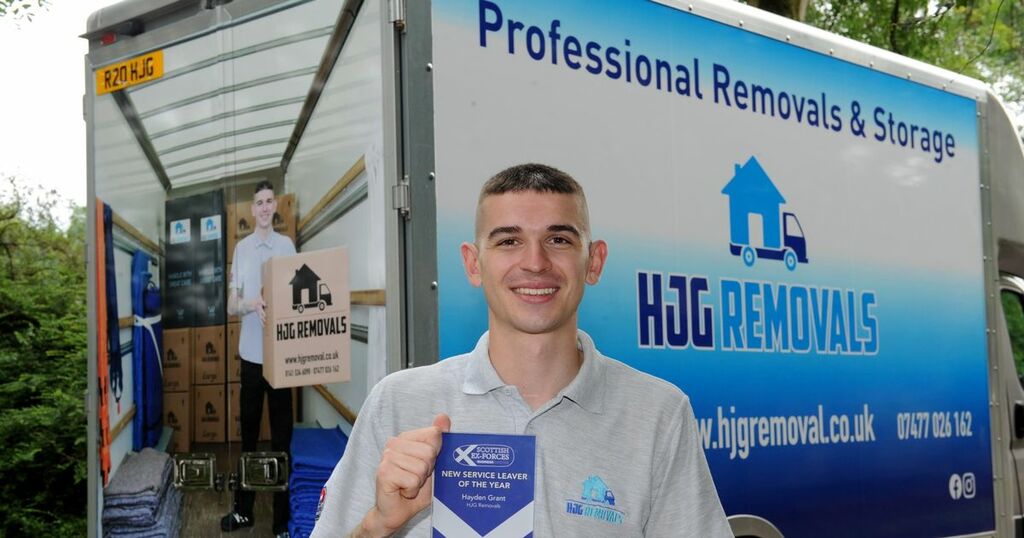 He used to be a battle-hardened squaddie, but a young Paisley dad has now become a hit on civvy street.

The astonishing progress made by Hayden Grant since he left 2 Scots has landed him an honour at the Scottish Ex-Forces in Business Awards.

His Hunterhill-based company HJG Removals bagged him New Service Leaver of the Year.

Hayden had to quit the army after six years when he shattered his knee during an army ski trip in Andorra.

Fortunately his knee has now been rebuilt, leaving him no problems in his strenuous new profession as a removals man.

And the 25-year-old, who attended the ceremony in the Hilton in Glasgow, said: “I was up against five other ex-military and it was a complete surprise I won.

“Even to be at an awards ceremony after 18 months of lockdown was a joy in itself.”

During lockdown, as paid-for trade dried-up, he used his vans to ship goods about central Scotland to the needy, expecially military veterans.

The former Linwood High pupil now lives his Paisley with his partner Jacqueline Cameron and their three-year-old son Hayden Jnr.

While in the Penicuik barracks-based 2 Scots, he carried out an operational tour in Afghanistan and was twice in Kenya.

During his time in Kabul, the area was relatively peaceful.

But he revealed: “It was actually after our battalion left Afghanistan that we went on an army ski trip to Andorra to help recuperate.

“I fell and the inside of my knee snapped.

“I recovered, but when I was in Kenya my knee went again, and that was it.”

Hayden added: “Luckily, thanks to a donor, I now have a reconstructed knee and it gives me no trouble doing what I am doing.”

He started HJG two years ago with just a van and business has built up to the extent he has work across Scotland and on longer house removals to Belfast and Wales.

He now has a mini-fleet of two company vans - with Hayden’s image on the back for some powerful branding - with extra hired when required.

There are three full-time staff and more are brought in depending on demand.

His award now has pride of place on the mantelpiece.

Hayden said: “Jacqueline has been so supportive and helps run the office, particularly when I had been away on charity work.

“During lockdown I didn’t want to sit about, so I got in touch with David Gibson of Fares4Free who supports veterans.

“He was trying to uplift food into taxis from a warehouse in Glasgow.

“My van proved to be a great asset and I was delivering things including furniture to people that had none all over Scotland.

“I think judges obviously looked at that aspect of my business too.”