KYIV, Ukraine — Ukraine announced Saturday that all women, children and older adults had been evacuated from the Azovstal steel plant, the last sliver of Ukrainian-held territory in the shattered southern port city of Mariupol, as Ukrainian towns and cities remained on edge for a major Russian holiday dedicated to military victory and new fighting flared along eastern front lines.

“The president’s order has been carried out,” Iryna Vereshchuk, Ukraine’s deputy prime minister, posted on the Telegram messaging app, offering little further detail. “This part of the Mariupol humanitarian operation has been completed.”

More than 5.8 million refugees have fled fighting in Ukraine since Russia began its invasion on Feb. 24, according to the United Nations. Ukrainian President Volodymyr Zelenskyy, in a Saturday night address to his nation, said more than 300 civilians were rescued from the steel plant in recent days and efforts were underway to prepare for the second stage of the evacuation: the wounded and medics.

Zelenskyy said he was also working to evacuate Ukrainian troops at the plant from a feared slaughter — a mission that he noted was “extremely difficult.” The armed forces inside the complex have so far rebuffed Russian surrender demands, but officials are worried that Moscow wants the steel plant flattened as a symbolic prize in advance of Russia’s annual Victory Day celebrations Monday.

“But we do not lose hope,” Zelenskyy said. “We do not stop. Every day we are looking for a diplomatic option that can work out.”

The Kremlin’s push for a sign of victory became more pressing as Russian forces faced defeat in their attempts to seize control of Ukraine’s northeast. On Saturday, the Ukrainian military said its troops had managed to push Moscow’s forces back from some artillery positions near Kharkiv, the country’s second-largest city. Located at the northeastern tip of the battle zone, just 25 miles from the Russian border, the city has been under relentless bombardment since the war’s earliest days.

But Russia’s grinding onslaught carried on in other parts of the country. On Saturday, a Ukrainian official accused Russia of dropping a bomb on a school in Bilohorivka in the Luhansk region in eastern Ukraine. Serhiy Haidai, head of the regional military administration in the eastern Luhansk region, posted on Telegram that about 90 people had been taking shelter in the school. So far, he reported, 30 people had been rescued from the rubble.

“Almost the entire village was hiding,” he wrote, noting that the school offered the only underground refuge for the community after the town’s social club was hit. “The basement of the school was the only place of salvation, but the Russians took this chance from people.”

In an operational report early Saturday, the Ukrainian army said its troops have been waging a counteroffensive near Kharkiv, and that Russian forces had blown up three bridges in an attempt to slow that push.

Though the city itself has remained in Ukrainian hands throughout the war, the Russian army has used captured outlying areas as a base from which to batter the city, which was home to nearly 1.5 million people before Russia invaded.

Ukrainian forces reported Saturday that they regained control of the town of Tsyrkuny, about 10 miles northeast of central Kharkiv. Ukraine also claimed to have destroyed a Serna-class Russian landing craft in the Black Sea with a drone strike. Satellite photos analyzed by the Associated Press showed Ukrainian drones had flattened most of the buildings on Russian-occupied Snake Island, as well as what appeared to be a Serna-class landing craft.

Russia also fired six cruise missiles on the southern port city of Odesa. According to a statement from Odesa’s City Council, four missiles hit a private furniture company and destroyed high-rise buildings in a residential area, and two missiles struck the runway and flight control system at an airport. No casualties were reported.

“The enemy continues not only the physical destruction of the region’s infrastructure, but also the psychological pressure on the civilian population,” the Ukrainian military’s Operational Command South posted on Telegram after the attack. “The Ukrainian nation is unbreakable.”

After a string of setbacks for Russia, Ukraine is wary that Moscow will lash out in frustration. Zelenskyy, in his late-night video address Friday, implored Ukrainians to exercise caution over the weekend in advance of Russia’s military holiday and parade.

On Saturday, larger numbers of Ukrainian troops than usual could be seen patrolling the streets of Kyiv, the capital.

“I ask all our citizens — especially these days — not to ignore the air raid sirens,” Zelenskyy said. “Please, this is your life, the life of your children.”

In a show of support for Ukraine, the leaders of the world’s seven largest advanced economies, including the United States, will hold video consultations with Zelensky on Sunday.

President Joe Biden will participate in the Group of Seven talks with the Ukrainian leader, which are meant in part to emphasize common resolve in response to the 10-week-old war, the White House said. The G-7 also includes Britain, France, Germany, Japan, Canada and Italy.

On Saturday, a senior Russian lawmaker criticized U.S. involvement in Ukraine, accusing the Biden administration of “taking part in hostilities” against Russia by providing Ukraine intelligence, not just weapons and equipment.

“Washington essentially coordinates and develops military operations, thereby directly participating in the hostilities against our country,” Vyacheslav Volodin, speaker of the Russian State Duma, the lower house of parliament, wrote in a Telegram post.

There is expected to be an abundance of bellicose Kremlin rhetoric associated with the holiday, which commemorates the Soviet Union’s victory over Nazi Germany, but Ukraine is also braced for potentially punishing strikes on civilian areas, or some new effort by Moscow to seize the military initiative in what Western analysts and military officials depict as a brutal but faltering offensive.

In an analysis released Saturday, British military intelligence cited “a heavy toll on some of Russia’s most capable units.” Plagued by supply-line problems, heavy casualties and low troop morale, the Russian command last month broke off an attempt to seize Kyiv and shifted its attention to the eastern front.

“It will take considerable time and expense for Russia to reconstitute its armed forces following this conflict,” the British assessment said.

The Institute for the Study of War, a Washington think tank that has been monitoring battlefield developments, pointed in its latest assessment to the Ukrainian counteroffensive outside Kharkiv, saying troops “may successfully push Russian forces out of artillery range” of the city in coming days.

In the ongoing battle for control of territory in the eastern Donbas region, the Ukrainian military said Saturday its troops had repulsed eight Russian attacks in the last 24 hours. Russia, meanwhile, stepped up what it says are attacks on Ukrainian infrastructure and Western-supplied weaponry.

Russia’s Defense Ministry claimed Saturday to have destroyed a cache of armaments from the U.S. and European allies near a railway station in the Kharkiv region. It also said Russian forces struck 18 military facilities overnight, including the Odesa ammunition depot. The claims could not immediately be independently verified.

In Mariupol, the evacuation of the last women, children and elderly people from the giant Azovstal plant, where hundreds of civilians sheltered underground for weeks along with Ukrainian troops, marked the end of a long and tense rescue operation. About 50 civilians were brought out Friday, Vereshchuk said, after a rescue effort was slowed by Russian violations of a local cease-fire.

The rescue operation, conducted with the United Nations and the International Committee of the Red Cross, did not end without casualties. Petro Andriushchenko, an advisor to Mariupol’s City Council, wrote on Telegram that three Ukrainian soldiers had died during an evacuation attempt and six others were wounded.

“They will suffer terribly, because there is no medicine left in the bunker,” he wrote.

“Politicians and world leaders are thanking each other for the successful evacuation of civilians,” he added. “For some reason no one applauds those who laid down their lives for the lives of civilians.… They gave their lives for others to enjoy the fresh air.” 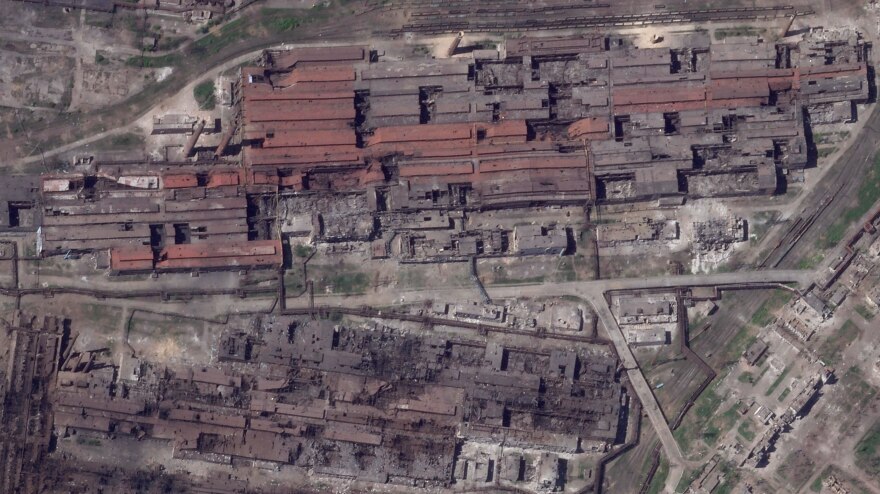 WEKU
One subscription that gives you access to news from hundreds of sites
Ukraine-Russia war: Zelenskyy says Mariupol 'destroyed completely' as Ukraine prepares to evacuate more civilians from steel plant — as it happened