Ukrainians have vowed to defend their country, with many deciding to stay and fight against Russia.

He said: “Russian forces brutally fired on Kharkiv from jet artillery. It was clearly a war crime. There will be an international tribunal.

“No one in the world will forgive you for killing peaceful Ukrainian people.”

Here, we look at how Vladimir Putin's invasion plan is going.

Follow the latest updates from Ukraine in our live blog

Even though the Russian advance from the north has slowed in recent days, Kyiv continues to face multiple attacks from the air.

A series of loud explosions rocked those sheltering in basements this morning. The city’s main TV tower was also hit in an attempt to cut access to information.

Hostomel Airport has been the scene of fierce fighting and has changed hands multiple times in the past few days, according to the Institute for the Study of War.

Russian forces arrived near Obolon on the outskirts of Kyiv on Friday and clashes in north-western Kyiv were reported at the weekend – but so far, Russian tanks and armoured vehicles have not been seen in the capital.

The most rapid advance on Kyiv has come down the west of the Dnieper river via Chernobyl, with the Russians taking control of a large area to the north and west of the capital.

However the 40-mile-long column of Russian tanks and troop vehicles has stalled and the MoD said the main body of the Russian column advancing on Kyiv remains over 19 miles from the centre.

There have also been mechanical problems with the tanks.

Russian troops are now advancing on the capital from the west after coming from the north, but are still thought to be 40 miles away.

It is through the picturesque city that Ukraine exports grain and minerals such as iron ore to Europe.

General Sir Richard Barrons, an ex-British military chief, has said to lose Odesa would be like the UK losing Dover.

Dnipro, on the Dnieper river which divides Ukraine, is of huge strategic importance.

Over the last week many Kharkiv residents have fled there, but now it is thought Dnipro will be a main target.

Roads and buildings are being fortified and hundreds of armed volunteers are manning barricades and roadblocks on the edge of the city.

Dozens have been killed and hundreds more seriously injured, including in a missile strike on the city’s central Freedom Square.

Although the Ukrainian military has retained control of Kharkiv, Russian paratroopers landed in the outskirts on Wednesday to conduct a raid on a military hospital, and an Indian student was reportedly killed while buying groceries.

Close to the ultimate goal of Kyiv, the Russian military is desperate to subdue its second city neighbour, which has a population of 1.5million.

By doing this, they will be able to close in on the capital on another front.

The onslaught on Mariupol has been one of the most brutal inflicted on Ukraine since Vladimir Putin launched his invasion.

An incessant attack with artillery, rockets and air strikes has completely obliterated parts of the city, according to local officials, and left hundreds of bodies in the ruins.

Russia’s determination to seize Mariupol stems from a desire to link Donetsk and Luhansk with Crimea, which Russia has controlled since 2014, and to effectively cut Ukraine off from the sea.

General Sir Richard Barrons, former commander of the Joint Forces Command, told Sky News that would be “a crippling blow to the Ukrainian economy”.

Russia’s capture of Black Sea port city Kherson is of huge strategic importance to the invaders as well as a blow to Ukraine’s dogged defiance.

By taking the regional capital and other cities, Putin’s troops will be able to cross the Dnieper River and advance on Kyiv from the south.

Crucially, army commanders will be able to link up the two main offensives.

Kherson holds the region’s fresh water supply, which the Russians could then use in Crimea.

The invaded city’s mayor Igor Kolykheav said Putin’s forces had taken over a council meeting, and imposed a curfew on residents.

He urged the Russians to not attack civilians, claiming there are no more soldiers in the city. 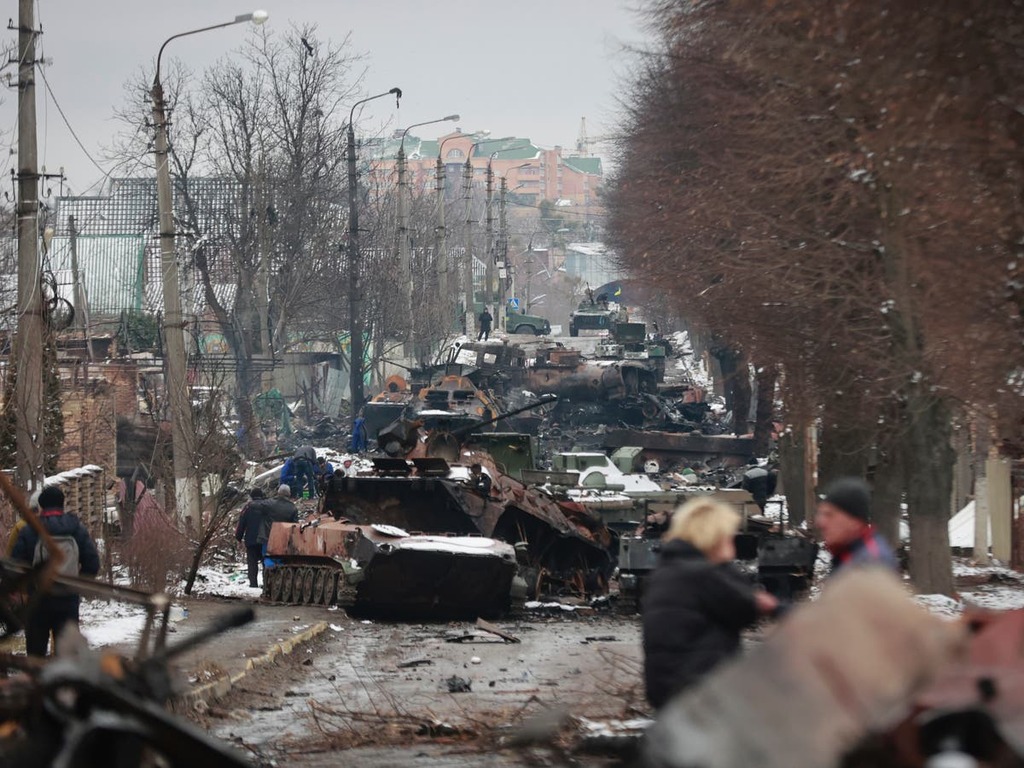 The Independent UK
One subscription that gives you access to news from hundreds of sites
‘Our troops fight like lions for liberation’ – As Russian military encircles cities, at street level defenders of Ukraine make them pay

In the town of Bucha on the outskirts of Kyiv, an entire street full of charred and twisted metal is…

President claims military objectives are being met on time

Civilians have fled Russian shelling in Irpin, 16 miles north-west of Kyiv, with one family was killed in the attack,…

Kyiv (AFP) - Russian troops seized Kherson, the first major Ukrainian city to fall in a war that has drawn…