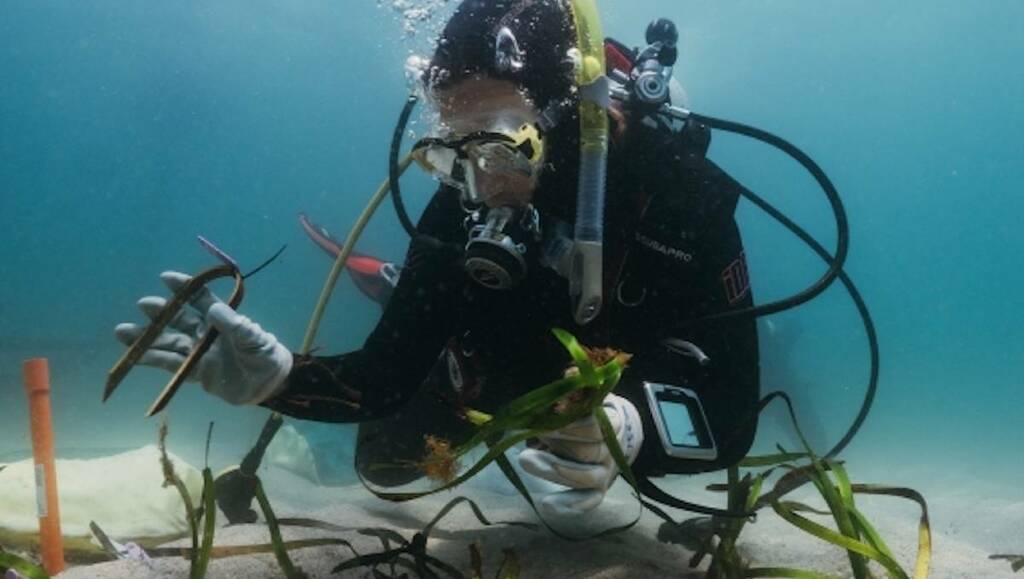 An endangered seagrass in Port Stephens which supports seahorses, blue swimmer crabs and other marine life is being successfully rehabilitated thanks to an army of citizen scientists.

A study led by University of NSW PhD student Giulia Ferretto enlisted the help of 80 people to restore Posidonia australis within the estuary.

"We have been restoring Posidoniaaustralis in mooring scars in Port Stephens, the second most impacted estuary by boat moorings in NSW," Ms Ferretto said.

Operation Posidonia is a collaboration between UNSW, Sydney Institute of Marine Science, the NSW Department of Primary Industries, and University of Western Australia.

It was launched in 2018 and used social media and meetings with local community groups and schools to engage with 5000 people.

Over two years the citizen scientists made up of beach goers, dog walkers and kayakers collected 1500 naturally detached Posidonia australis shoots washed up on the beach after storms, strong winds and high tides.

A citizen scientist on a one-hour beach walk could collect as many as 30 viable seagrass fragments in favourable conditions.

The shoots were kept in large floating boxes before being replanted by divers in the scars caused by boat moorings.

"We found that fragments planted in winter survived better that those planted in summer, with some replanted areas reaching 70 per cent survival after one year," Ms Ferretto said.

"This is a great result considering that otherwise those fragments wouldn't have had another chance than drying up at sun."

The team is now expanding Operation Posidonia in Lake Macquarie and Botany Bay, two of the estuaries where Posidonia australis is formally listed as endangered.

The Posidonia seagrass species are only found in Australia and in the Mediterranean Sea.

"The idea of using storm-generated fragments for restoration was initially developed by a group of scientists in Italy and applied to [their] local seagrass, Posidonia oceanica," Ms Ferretto said.

"We then combined this idea with the use of citizen science to speed up the collection of the fragments."

Posidonia australis is a foundation species of seagrass which creates a complex and three-dimensional habitat that supports and sustains hundreds of other species.

It provides food and shelter to many species of fish and invertebrates, which live amongst seagrass leaves to look for food or find protection from predators.

"Some of the more famous species supported by Posidonia australis are the endangered White's seahorse and commercially important species like blue swimmer crabs, bream, snapper and luderick," Ms Ferretto said.

"Seagrass meadows are also extremely effective at capturing and sequestering carbon and can slow down climate change by storing carbon more efficiently than terrestrial forests, as well stabilising sediments and protecting our shorelines from erosion."

The traditional mooring of these boats, which involves a chain and concrete block that harrows the seagrass bed, creates raw 'sand scars', which join up to form larger uninhabitable zones.

Some of these mooring sites, around Port Stephens, have been replaced by less destructive environmentally friendly moorings and it's these sites that the team is restoring.

Ms Ferretto said the response from the Port Stephens community to the project has been awesome.

"The planting moment for me was the best part, especially when the marine life just started to swim around us divers," she said.

"There was one site, in particular, where every time we'd dive there, there was a group of cuttlefish following us from the moment we would jump in until the end of the dive, as if they were checking if we were doing a good job.